An excited cracker-head sets off a firecracker! 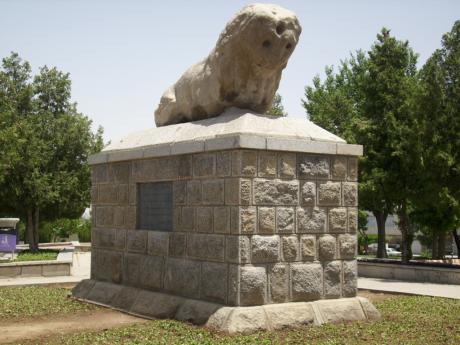 Yesterday they arrested the “suspect” in the Ahmadi assassination saga but it is not clear how he may confess. We’ll have to wait and see in his TV confession.  Below are some of the leading scripts.  Can you think of some more?!

– The suspect confesses that CIA gave him $8M to throw a grenade at Ahmadi but when they code named Ahmadi cracker-head, he flatly refused on principle and instead set off a firecracker

– The suspect confesses that he was being trained in firecracker technology

Photo caption:  This is a monument in Hamedan (the city of attempted Ahmadi’s assassination saga) and below is verbatim text of the plaque in English that describes it:

The stone lion (Shir_e_Sangi) was first carved out by the order of Alexander to commemorate the death of his close companion Hephaesion in 324 B.C.  This monument was located beside the one of the gates of the city for which it was called Bab_ol_Asad  According to a general belief it is a talisman to protect the city against evil, cold and diasters.  It was demolished in  319 A.H. by the order of Mardavij as the Deylamids took over the city.  Shir_e_sangi (stone lion) statue was rejistered as one of the national monuments of Iran in 1310 A HS.. It was put on a stony stand in the autumn of 1387 A H.S. during its reconstructive operation by Hamedan Cultural Heritage,Handicrafts and Tourism Organization.