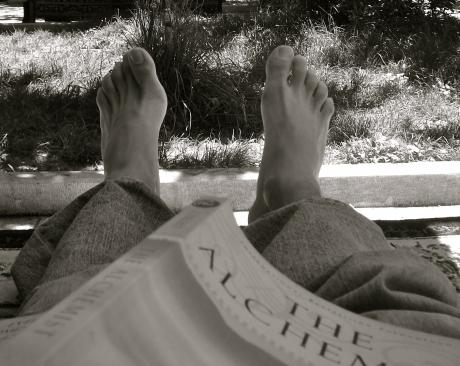 With two of his friends, myfather and I spent a week in the laid back city of Shiraz, in southern Iran. Insearch of the famous Shirazi wine, Iwas left completely intoxicated with a warm belly, dry teeth and a total lackof the right combination of words.

One afternoon, we escaped fromthe heavy sun by chewing on thick and yellow ice cream at an open-air teahouse,when one of them asked about the book I was reading. I looked up from its pagesat the fountain ahead and I told him it was TheAlchemist by Paulo Coelho and was surprised that he had never heard of it.

We went to see if the littlebookstore opposite from us had it and the girl behind the counter quicklyhanded me a Farsi version with the binding on the right. I offered it to him asa gift, and even with the help of the beautiful, hazel-eyed salesgirl, I wasleft disappointed when he declined. “Idon’t read these types of books. I have no use for them!” he saiddismissively as he indicated to the tapes of Rumi verses in his bag “…I read poetry”. ‘Unbelievable’ I thought as I shook my head at the girl. I startedto dislike him after that. I mean, what kind of close-minded old man turns downa book?

During dinner as he peeled theburnt skin of his barbecued tomatoes, I watched the way his droopy eyes slowlyblinked, while his quaint mouth argued with his pea-brain about whether tobreathe air or complain. ‘Everything hasto be just so, yes? You eat the tomato meat, but leave the skin? And FOR WHO?’I thought to myself, ‘if it were my restaurantI’d give you a damn plate of potato peels!’ Luckily, I was distracted byone of my father’s stories about how he got a haircut from a prostitute in Cubalast spring break. After the credits rolled and father smiled from thesatisfaction of his audience, I calmly asked him if he had ever left Iran.Without looking up from his neat plate and through his narrow teeth he replied,“Only Dubai”. I took a long sip frommy non-alcoholic beer and said, “You’reafraid of new things! Foreign things scare you. And we both know this is notgood!” The three Iranian men smiled at my youthful clairvoyance: ‘Yes…’ I thought. Achievement. Eat thatyou Unranian Islamic Republican!

You see one of the maindifferences I noticed between westerners and their demographic equivalents inIran, is that the former are much more vocal with their opinions regardless ofthe seniority of those within earshot. For me, horizontal hierarchy allows fora more efficient exchange of ideas. Only through open communication, can wehear a newer version of a story we thought we already knew well. Askingdirections to your own street from a stranger, can introduce you to a shortcutor a scenic route you never knew! Different versions of the same story-this iswhat the true traveler reads. You met a beautiful girl. Don’t stare, pretendyou’re blind and she will hold your hand in hers to your door!

For better or worse, I found myIranian youth to be much more obedient than I would be in their shoes. I guessthe Canadian Board of Education programmed it into my head that my point ofview actually counts for something. Or maybe my constitutional rights forcedthem to bite their tongues when I used mine. However, if you continue to chooseto read my words, you’ll see that it was I who spoke a bit too soon this time.

Days after my dinner tabletriumph, my momentary self-love turned into a soggy cup of melted cream as Iread the last pages of my book. In TheAlchemist, a young shepherd from Southern Spain follows his Personal Legendall the way to the pyramids of Egypt only to find that his treasure was underthe very same church steeple in his Andalusian hometown. The principal elementsof this novel were taken from a Rumi poem written hundreds of years ago, inwhich a man from Baghdad follows a reoccurring dream of finding a hiddentreasure in Cairo. After being mistaken for a thief while begging on thestreets for food in Cairo, he tells of his story to a policeman, who had thesame dream; only his treasure was buried under a street in Baghdad.

Sometimes a journey may lead youthrough a go-cart maze, only to find that the finish line starts where thestarting line ends. The message that shouldn’t be lost here is that if thehighs make you feel like you’ll never come back down, and the lows leave you witha feeling of utter desperation, then the voyage could never be in vain. Whetherit’s written in one of the 25,000 verses of Rumi’s Mathanawi, or in the Englishfolklore story, The Pedlar of Swaffham the message is same: we all need toescape from our cozy comfort zone to truly see what we had, and hopefully stillhave.

‘How ironic…’ I thought. I was trying tosell this man on a book that was a mere novelized version of something healready had growing in his backyard; like Botox to a Brazilian, or contrabandto the Taliban. I literally went from one end of the intellectual spectrum tothe other, which was a great lesson in the importance of opposites.  At one corner, stood a 120-pound,instant denouncement of a classic case of cultural fascism with a mouth full ofinventive insight instead of a mouth-guard. And in the other corner stood, theugly, heavyweight of truth, knocking me to the floor, by the legacy of Iran’soceanic, philosophical gravity. Each side like two beautifully feathered wingshoisted me over temporal, arbitrary fences, which held nothing in and keptnothing out.

To the true listener, a remix, oradaptation never takes anything away from the original. How could it? If Rumifound a traditionalist and a modernist caught up in a primitive fashion show,he would strip both naked, lock them in a room and put a loud speaker upagainst the door and watch their blood turn into a flowing wine!

The novel, the poem it wasadapted from and the countless derived works in between are about The Search.Searching so long only to realize that your search ends where your fingertipsbegin. Wisdom comes with age and not always in the pages of a mainstreambestseller. As in the words of Richard Pyror, ‘you don’t get old being a fool,see…lotta young wise men that’s dead than a motherfucker ain’t it?’

Within a day or two I went frombeing a clever mouth to an infant, recoiled into a modest fetal ball, to abewildered watcher. The true tragedy is the actor under the spotlight, merelywaiting for applause, forgetting that his stage ends where another one begins.

Now that I have poured out mywater onto our garden, my old friend, Rumi, will shatter the glass that Ithought was my private property:

If I had known thereal way it was,
I would have stopped all the looking around.

But that knowing depends
on the time spent looking!

You fear losing acertain eminent position.
You hope to gain something from that, but it comes
from elsewhere. Existence does this switching trick,
giving you hope from one source, then satisfaction
from another.
It keeps you bewildered
and wondering, and lets your trust in the Unseen grow.
I wait and fidget and flop about
as a decapitated chicken does, knowing that
the vital spirit has to escape this body
eventually, somehow!

This desire will find an opening.

There was once a man
who inherited a lot of money and land.

But he squandered it all too quickly. Those who inherit
wealth don’t know what work it took to get it.

In the same way, we don’t know the value of our souls,
which were given to us for nothing!