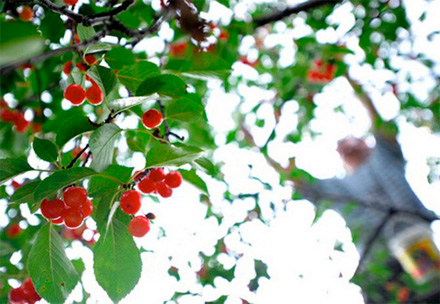 At any given time, if there is someone in America looking at a neighbor’s fruit tree with a look that suggests that American notions of private property do not apply to fruit, there is a good chance that person is Iranian. There is a good chance that they were walking along when the reality of pears or apples or figs hit them in a way to make them stop and look at the tree and see who they are. If they were to eat of that fruit, they would be eating of themselves. It is difficult to see how there would be something criminal in that.

And they would have to consider the fact that the same world that has a tree like that has a criminality associated with that. It would be a potential moment of moral crisis. And they would consider the whole of their journey that has brought them to that moment, and they would take solace in knowing that they don’t have to eat of the fruit to be on the side of the tree. Which is true. However, they would be able to hear the present and the past speak to each other if they did eat it. They would speak in strong, bold voices. As it is, the past does most of the talking, which is not such a bad thing. They would rather it speak than stay silent. But there is an imbalance without the present’s response, and they could go on their way unbalancedly as they have done it before, but balance does not seem like a lot to ask.

They will consider their options. They could take a piece of fruit and walk off quickly with it, but that would suggest a desperation about it, and fruit are the least desperate thing in the world. They could knock on the door and say, “Hello. My name is –. I am from Iran. We have this fruit there too. May I take one?” It is silly to think that the neighbor would be alarmed at the presence of a stranger from Iran. It is ridiculous. It is a matter of fruit.

If it is silly, why did I think of it then? they will think.

If America could start with this tree, they will think, there would be no problems. They like to think that it starts with its biggest things, but if it could start with this tree, it would go farther. Maybe it does, and they know it. It is nice to think that it does and they know it. That is why it is important for them to take a piece of the fruit – to be a participant, to be a participant in life and in America. It is where my life is now, they will think. They are a stranger among its poetry in many places, but they are not a stranger among the tree. They could tell Americans about America among it. They don’t know who would listen, but they could tell them.

They won’t know how long an Iranian has to be in America before they can say something to its people about its cities, its streets, its miles and miles of endless commerce and industry, traveling horizontally and vertically as well. They won’t know how long for its houses and fences and doors. And all that is to not even begin to guess how long before they can speak on what is happening inside the houses and fences and doors.

But they will know how soon before an Iranian can speak about America as someone with a right to its poetry upon seeing a fruit tree: Right away. Right away, and it will be true for the day they arrive and for having been here twenty years. They have a right to longing and memory and love on the day they arrive. They have a right to them in an American setting. And the truth is that once in a while as has happened in my city of San Francisco, an Iranian will be walking down the street and they will see a countryman or woman standing and staring at a fruit tree. Don’t ask them how they know that it is a fellow Iranian. They know. When that happens, there’s no need for words. They are in Iran as well as in America. There is no reason for anybody to get alarmed about anything, and as I write these words, it is heart-breaking to think that anybody would. It is heart-breaking to think that when two Iranians love the sight of a fruit tree so much that between them they can create what Iran is there on an American street, that it could be received as a statement on what America is not. It is heart-breaking to think that that creating could be seen as a replacing, because their hearts have America in them by being there. They would not stop to look at the tree if they did not believe in where the tree grew.

So they will not make a big acknowledgment there in the street. The man or woman who is looking at the tree will look for just a moment at the one who is walking, as though to ask them if it is really true. And they will look back without stopping because it is best to move through this kind of poetry, as if to say of course it is true, we’ve gotten this far, haven’t we? It is best to move as though it is no surprise when Iran suddenly shows up in America, as though it is the most natural thing in the world, and there’s no reason for anybody to get alarmed about anything, but when an Iranian sees another Iranian looking at a fruit tree, they are in Iran, that’s all.