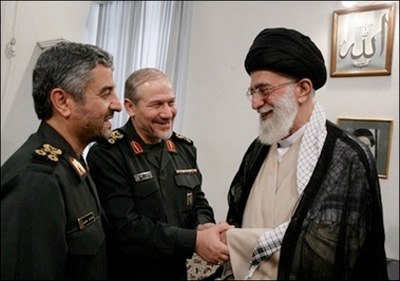 For the pundits, there are only two questions about U.S.-Iran relations that are of any importance: (1) Will Israel and/or the United States attack Iran? and (2) will the new sanctions have enough bite to persuade Iran to change its nuclear policy? Despite all the printers ink spilled on these two issues, the answers are an easy no and no.

Neither the United States nor Israel will take the military option off the table, thereby giving the pundits (and the crowd that is dying to repeat Iraq) latitude to keep the distant prospect of military action on the front pages, where it has been for years. As a lede, it sells columns and newspapers, so it will not go away. But as analysis it is either blinded by the momentary hype or else is simple wish fulfillment.

Uber-neocon John Bolton had it right. If any such attack were to occur, it would have been at the end of the Bush administration when there was nothing left to lose. Bolton thought it was so inevitable that he predicted it unequivocally in a Wall Street Journal column in 2008. Dick Cheney apparently agreed, judging from his subsequent statements of regret. So it is fair to say that George W. Bush, after looking the potential consequences, resisted the advice of his neocon advisers, his previously dominant vice president, and the reported direct request from the government of Israel — and rejected a strike. What is the likelihood that Barack Obama, with the same catastrophic scenario before him, will approve? Forget it.

Sanctions do not persuade dictatorial regimes to abandon projects that they think are central to their security and survival or even their self-image. Just look at Saddam Hussein. The international sanctions imposed on Iraq in the 1980s make the current Iran sanctions appear anemic in comparison. Every item that went in and out of Iraq was subject to approval by a UN committee dominated by a vindictive United States. Yet, although Iraq had abandoned its nuclear weapons program years earlier, Saddam could not bring himself to let his own people and his enemies know that. Instead he was prepared to gamble that the United States would not attack him.

One of the reasons for this bad bet was that he and his cronies were doing so well under the sanctions that there was no immediate necessity to come clean. They, after all, controlled the smuggling routes. And their henchmen managed the thriving and enormously lucrative black market. As for concern with their own people, a rotund Tariq Aziz, sitting with a fine Scotch and a Cuban cigar, informed a worried UN representative that it would be good for the Iraqi people to lose some weight. An Iraqi friend of mine told me at the time that the sanctions had made criminals of the entire Iraqi middle class, which had to resort to illegal behavior in order to survive. The biggest – and most successful – of this new criminal class was the privileged group immediately around Saddam Hussein.

Which brings us to Iran. The sanctions are more effective than many anticipated. They have built a web of financial restrictions and limitations around the already weak Iranian economy that is certain to cause significant problems for the leadership. Iran’s critical energy sector is particularly vulnerable. It is in a pincer. Because of cheap energy prices inside the country, artificially propped up by massive subsidies, energy demand is soaring. This siphons off a lot of Iran’s oil production, which would otherwise be sold on the world market for hard currency.

At the same time, because Iran’s oil fields are old and complex, they require modern technology to maintain production. That technology – and the capital investment that can only be provided by the major international oil companies – has been absent for many years. It was driven away partly by the sanctions, ironically assisted by Iran’s own short-sighted negotiating tactics that offered only the most meager profit margins to outside investors. As a result, Iran’s oil production is in decline at the same time that more and more of it is being soaked up by domestic consumption. In a period of relatively low oil prices, this means that Iran’s hard currency earnings are drying up at an alarming rate.

This unenviable economic situation is compounded by what has to be described as perhaps the least competent economic management team of any major country in the world. Ayatollah Khamene`i, the Supreme Leader, seems totally preoccupied with bolstering his own shaky political legitimacy by pandering to the Revolutionary Guards who surround and protect him. The result is corruption on a scale beyond anything the shah’s regime could have imagined.

President Ahmadinejad, also a creature of the Revolutionary Guards, is free to indulge his taste for outlandish and irresponsible rhetoric. His words keep the international and domestic spotlight glued to him; but the effect drives away prospective investors and facilitates the U.S. drive to enlist international support for sanctions against Iran. An American Jewish leader once joked with me that he suspected Ahmadinejad was a Mossad agent: no one, he observed, had been more helpful in promoting donations to Israel and Israeli causes. At the same time, under his leadership Iran has inflation and unemployment that are both in double digits.

But to be fair, Ahmadinejad is the first politician in modern Iranian history willing to address the “third rail” of Iranian politics – the immensely costly subsidies on food and energy. His initial efforts to reduce the amount of subsidized gasoline that Iranians could use met with outbursts of indignation, including torching filling stations. But these rules now seem to be grudgingly accepted and have eased slightly Iran’s energy dilemma. He is now addressing the low tax rates assessed against merchants. This has also resulted in outrage, including closing the bazaars in Iran and other major cities. But his campaign seems to be making progress.

These are needed reforms that would be recommended by any responsible economic overseer, including the International Monetary Fund. Ahmadinejad attempts to balance his daring assaults on the entrenched economic interests by his belligerent rhetoric, always casting himself as the champion of the little guy. In that he resembles his populist predecessors, from Juan Peron to Huey Long to Hugo Chavez. Ahmadinejad takes on America and Israel the way Governor Long took on Standard Oil. But like other populists, Ahmadinejad is the prisoner of his own eccentric view of the world and his loyalty to lieutenants who may or may not be worthy of his faith in them.

The key question about Iran today is not whether it will be attacked or collapse under sanctions. It is whether Iran is capable under its present leadership to take a sober decision about how to deal with the outside world. The Revolutionary Guards have established a dominant position in Iran’s military, its economy, and its politics. Iran increasingly comes to resemble the corporatist states of southern and eastern Europe in the 1920s and ‘30s that we call fascist. Iran is conducting an interior battle with its own demons, from the millenarians on the far right who choose to believe that Khamene`i  is the personal representative of God on earth, to the pragmatic conservatives who simply want a more responsible leadership, to the reformists of the Green movement whose objective is to put the “republic” back into the Islamic Republic by giving the people a greater voice.

This is a yeasty and unpredictable mix. No one knows what is going to happen next.

First published in Gary Sick’s blog. Sick is a senior research scholar at SIPA’s Middle East Institute, and an adjunct professor of International and Public Affairs at Columbia University. Hes erved on the National Security Council under Presidents Ford, Carter, and Reagan.