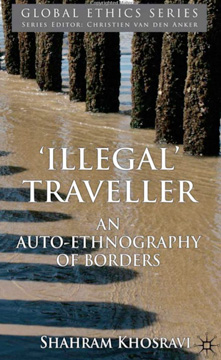 SHAHRAM KHOSRAVI is Associate Professor, Department of Social Anthropology, Stockholm University, Sweden. He is the author of Young and Defiant in Tehran.

From the Introduction
This book is not an autobiography, but an ethnography of borders. Based on my own journey and my informants’ border narratives, I will tell of the nature of borders, border politics, and the rituals and performances of border crossing. Auto-ethnography lets migrants contextualize their accounts of the experience of migrant illegality. It helps us explore abstract concepts of policy and law and translate them into cultural terms grounded in everyday life. Furthermore, focusing on the individual also draws attention to the implementation of policy and law, which produces different insights from focusing narrowly on legislation and formal documents per se (cf. van der Leun 2003). Border stories reveal the interaction between agency and structure in the migratory experiences. They offer a human portrait of illegal travellers.

This book is the outgrowth of my own ‘embodied experience of borders’, of ethnographic fieldwork among undocumented migrants between 2004 and 2008, and of teaching courses on irregular migration and the anthropology of borders. It also emerges from my activities outside academia: freelance journalism, helping arrange events such as film festivals about border crossing, and volunteer work for NGOs helping failed asylum seekers and undocumented migrants in Sweden. In my years as an anthropologist, I have been astonished at how my informants’ experiences overlapped, confirmed, completed, and recalled my own experiences of borders. One interesting aspect of the auto-ethnographic text is that the distinction between ethnographer and ‘others’ is unclear. Similarities between informants’ subjective experiences and my own blur the distinction between anthropologist and informants. This challenges imposed identities and boundaries and offers forms of meaning alternative to the dominant discourse (Pratt 1992). Auto-ethnography links the world of the author with the world of others. It bridges the gap between the anthropologist’s reality and the reality of others.

This book has also emerged from ‘thinking poetically’, that is, ‘keeping alive a sense of what it means to live in the world one struggles to understand’ (Jackson 2007: xii). Through poetic thinking, one does not focus either on one’s own subjectivity or on the objectivity of the world, but on what emerges from the space between (Stoller 2009). Studies of migrant illegality are often written by people who have never experienced it; my aim has been to offer an alternative, partly first-hand, account of unauthorized border crossing that attempts to read the world through ‘illegal’ eyes. I tell the story of those whose history has been crushed underfoot. Like Benjamin in his work on The Arcade Project, I am a ‘ragpicker’. I pick up the refuse of history, gather all that is disregarded. Following Benjamin, I believe that ‘waste materials are to enter into significant connections and fragments are used to gain a new perspective on history’ (Benjamin 2007:252–253). I collect stories of the ‘illegals’: stateless people, failed asylum seekers, undocumented and unregistered people, those who are hidden and clandestine.

Like the testimonios in Latin America, a tradition that confers authority on subaltern voices (Warren 1997), this auto-ethnography gains its narrative power from the concept of witnessing. The significance of the voice of the witness is that the witness has been there, has seen what happened. Witnesses have themselves lived the disaster, and might themselves be victims. They can retell the story and unfold the event with first-hand authority. This does not mean that witnesses, just because they are insiders, possess the only authentic approach. The witness’s narrative is only one of many, albeit one less heard. In Theses on the Concept of History (1999[1940]), Benjamin writes about a Paul Klee painting entitled ‘Angelus Novus’. In the ninth thesis, he describes an angel flying over the ruins of history. His face is toward the past; he is looking back, resisting forgetfulness. He would like to pause and piece together what has been ruined. But a strong storm – a metaphor for progress – from Paradise is blowing, driving him irresistibly into the future, to which his back is turned. In this book I intend just this: to delay, to look back and tell the story of the refuse of history, the story of the defeated – to two of whom this book is dedicated. However, rather than simply being a memoir of the past, the mixed voices here convey a warning for the future.

This book is an essay, recalling the meaning of the French essayer, to try. My hope is that the reader will experience this book like a journey on a ring road, returning at the journey’s end to the starting point, but with unanswered questions, inexplicable problems, unsatisfied curiosity, and unfulfilled expectations. The reader will nevertheless have encountered many people and things along the way. I have tried, following Walter Benjamin’s example, to show things, not tell them.