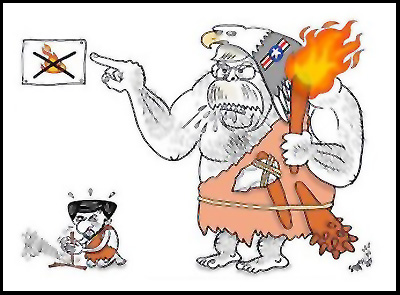 Threats of preemptive attack on Iran with conventional and nuclear weapons are made with greater frequency by officials at the highest levels of government in Israel and the United States. American and Israeli media are filled with growing evidence of racism toward the Persian race by reinforcing a picture of Iranians as sub-humans. One can not avoid the ugly telltale signs of the coming war when doing a simple web-search of news these days. It is obvious the Western public opinion is being prepared to do harm to Iranian people.

Whether the impending genocide of Iranians is justified in the name of protecting Israeli and American national interests is no longer relevant. The recent US national intelligence declaration made it clear that Iran is not pursuing a nuclear weapon. But the facts do not make any difference to the powerful Israeli lobby who calls the shots for the United States. This is the same Israeli interest lobby that helped shape the war with Iraq on false pretenses and now works to check the strategic power of Iran in the Middle East by coaxing the US to once again do its dirty business.

Why the US presidents or presidential contenders have to declare their unchecked allegiance to the protection of Israel before each election and throughout their tenure is no mystery to the author. For skeptics, a web search of “American Israeli Public Affairs Committee” proceedings should open some eyes. At the same time, no one in their right mind can have a public discourse on the topic of US policy toward Israel. As taboo subjects go, this is the proverbial apple which will banish anyone who dares speak from heaven of American political elites. Israel does and says what it wants and US politicians will find a way to deliver in their own time and with very few questions asked.

The famous conservative thinker, Jeffrey Goldberg’s recently published “Time to murder the filthy Persians” stating his mistaken ideas about Iranian motivations and the imperative for attaching Iran. Chairman of the Joint Chiefs, Mike Mullen alluded to the Iran attack plans being made ready by the US. Israeli media are filled with predictions and declarations of imminent war. Israel is conducting civil defense exercises to prepare for conflict. Turkey, and Brazil have stepped up their desperate efforts to prevent a disastrous war. Even Fidel Castro has risen from his death bed to warn Iranians of the Armageddon about to come. There are too many signs for any sane person to ignore.

Drawing parallels with the experience of Pakistan, India and Israel itself, Iran has no other choice but to pursue the ultimate weapon. Judging by the results, going nuclear in each case provides the ultimate safety net against existential threats now being made by the usual suspects. Bullies and hegemons including Israel and the G5 understand the implications of a nuclear counter strike and normally stop their threats and murderous plots by finally “taking some options off the table”. US is actually giving Pakistan financial and military support as it plots against the US interests in the region. India is the recipient of the most advanced Plutonium reactor technology used for accelerated weapons production.. And no one has to explain what Israel enjoys in status and support among the hypocrites. Meanwhile the Russian “prostitutes” are busy peddling the goods to the highest bidder never sure to actually deliver what they appear to be selling.

For Iranians of every color and creed, this is no longer a case of Mullah against the people. Whether you are for or against the Arab Regime, its Bedouin religion or its barbaric ways, it is irrelevant. There is an Iran separate and distinct from the Mullah-Arab Regime same as there is an Iranian identity completely separate and distinct from the Islamic identity. Putting aside differences, all should prepare to fight for Iran and its unique Iranian culture. Those who love Iran and its people should unite around the Regime and prepare for the imminent outbreak of hostilities against the people. Skilled and capable expats should do whatever they can to help Iran build and deploy its nuclear weapon in the shortest time possible.

This is where Mullahs may make a lethal error by actually doing what they publicly claim; that is keeping the objectives of their nuclear program solely for peaceful purposes. This would be an error of existential proportions that can not be remedied in a short few months to come. Only if the world could realize that the ouster of the cancer that grows in Iran is the sole responsibility of Iranians.

The Green movement and the brave sacrifices of so many Iranians came about immediately after the threat of foreign hostility was eased for a brief period. Just as immediately, the heroes will rise again to set Iran straight once the threat of vampires, hyenas and racist colonialists is completely removed. This is the history of Iranian people who have fought bravely to preserve the ancient nation and its unique culture against so many conquerors and marauders.

Let us all be vigilant and unified in the support of Iran and its current Regime until the threats are nullified. Let us prepare to defend and revenge Iran against its mortal enemies. And let us remind those who do harm to Iran of our intentions just as “Caesar’s spirit, raging for revenge, with Ate by his side come hot from hell, shall in these confines with a monarch’s voice cry “Havoc!” and let slip the dogs of war, that this foul deed shall smell above the earth with carrion men, groaning for burial.’