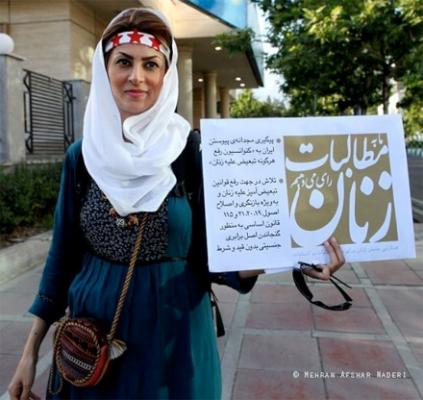 Shiva Nazar-Ahari’s family is gravely concerned about the fact that her court date has not yet been scheduled despite the fact that she has been in temporary detention for nearly a year. Shiva is a journalist, human rights defender and women’s rights activist. A court hearing had been scheduled in June but was postponed for unknown reasons. During that time, Judge PirAbassi, the judge overseeing the case, had promised Shiva and her family that after combining the cases pending against her he would schedule a court date. Shiva is currently being held in the women’s ward at Evin prison. This member of the Committee of Human Rights Reporters has spent over 100 days in solitary confinement. She was arrested in June 2009, one day following the disputed presidential elections, but was released 3 months later on a bail order of 200 Million Tomans (roughly $200,000). She was arrested again on December 20, 2009 along with Koohyar Goudarzi another member of the Committee of Human Rights Reporters, as they traveled to Qom to take part in the funeral services of the late Ayatollah Montazeri. Despite all the months in detention the status of her case remains unclear. Koohyar Goudarzi also remains in prison.

The following is an interview conducted by Kalameh with Shiva’s mother, Shahrzad Kariman:

What is the latest status of Shiva’s case? Will the court hearing be held after all?

It has been seven months since the second time my daughter was arrested, but she remains in prison in a state of limbo. Six of these seven months were spent in Section 209 of Evin prison [managed by the Ministry of Intelligence] and one month has been spent in the public ward. I have gone to the Revolutionary Courts on numerous occasions, but their response has been very insulting.

Why? What have you asked of the Judge overseeing the case to warrant insulting responses?

Shiva’s father and I only have one question, why is it that despite the promises of Judge PirAbassi a month and a half ago, who said that after compiling the cases against Shiva into one case the court would hold a hearing, Shiva remains in prison in a situation of limbo. I went to the courts once to inquire about the situation of my daughter and intended to ask this question, but the person in charge of Judge PirAbassi’s office was very disrespectful, so much so that after that experience I took ill for two days. On another occasion when Shiva’s father went to the office of Judge PirAbassi, Mr. Satari the office manager was similarly disrespectful toward him. Although, I should note, that more recently, their approach has improved.

Has Shiva’s father also followed up with the courts about the date of her trial?

Yes. He only had one question in this respect. Don’t we, as the parents of Shiva, who has been in prison for nearly one year, have the right to ask the court one question? But the office manager of Judge PirAbbasi had the same disrespectful approach toward Shiva’s father. He even threatened my husband, saying that if he did not vacate the court in three minutes, he would be arrested. For this reason, when trying to exit the courts quickly, Shiva’s father slipped and fell on the stairs and broke his leg. What is the logic of the courts that makes them treat the worried parents of a young prisoner in this manner?

Have you complained to the prosecutor’s office about the treatment you are receiving from the courts in following up the case of your daughter?

What is the situation of your daughter in the women’s public ward at Evin prison? Does she benefit from basic sanitary conditions in prison?

Shiva never complains. She did not complain when she was in Section 209 of Evin prison [managed by the Ministry of Intelligence] nor has she complained now that she is in the public ward at Evin. She is currently sharing a prison cell with 26 other female prisoners. The room has only 21 beds, meaning that 5 prisoners have to sleep on the floor and Shiva is one of the ones sleeping on the floor. There is always a shortage of water in this ward and the water is turned off regularly. They only have water for 2-3 hours a day. Sanitary conditions at the Ward are poor, and there is a serious problem with lice. The food given to prisoners of this Ward is not nutritious. There is no fruit available even at the prison store. For example, Shiva told us that 26 people shared a single melon. The store at the prison only sells canned food, which we all know is not nutritious. For this reason, I am worried about my daughter’s health. Despite all the hardships she endures, Shiva never complains and says that she is fine.

So it seems that your daughter’s emotional health is fine?

Yes. Shiva is resilient and she never complains about anything. But the indeterminate state of the case pending against her has worried all of us.

What is your request, if any, of those in charge of Shiva’s case?

I ask all court officials and interrogators to follow up her case, so that her situation is clarified and a court date scheduled. Shiva has put up a bail amount of 200 Million Tomans (roughly $200,000) for her conditional release from prison the first time she was arrested in June. We hope that after her court hearing is held and given that the bail amount is still in place, she will be conditionally released or will be allowed temporary leave so she can come home to her family.