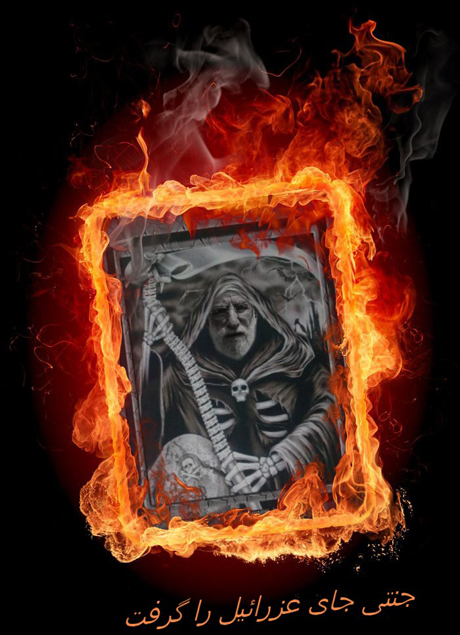 (Based on an image and an original idea by Red Wine)

God was seating on his throne peering at the angels, prophets and all his other helpers who had lined up in front of him and the few who were hovering above the others. Everyone was there with exception of the Azrael (angel of death) who had gone missing since the day before.  Everyone knew that Azrael was the most punctual angel who always turned up just on time. Not earlier and not later, just on time. Now this punctual angel who had never allowed anyone to live one second more or less than the divine allocation was absent. The angels were silently staring at the god hoping that he would shed some lights on the whereabouts of the Azrael.

The all knowing god who knew every secret of the world including inner thoughts of the angels said: How would I know? Perhaps devil has deceived him and now he is eating an apple somewhere. Let me ask Gabriel if he has managed to find anything.

Gabriel who was still breathless and sweat was dropping from his wings shook his head from side to side and said: No news of him anywhere. Just as if he had never existed.

Angels started whispering to each other and the Messiah (Mahdi) who was now worried by the latest developments complained: Oh god, what shall I do?  I was supposed to soon return to the earth and chop everyone’s head. Without Azrael it will be a waste of time. One only dies when her soul is detached by the Azrael. Without him all my efforts will be in vain. I will be chopping the fella’s head only to see him picking it up again and going his way. And then it’s not just one or two heads. There will be a hell of a lot more heads rolling and there is a good chance that someone would pick someone else’s head. Next you would suddenly see that no head matches its body any more, for example it’s a man and has got a woman’s body or vice versa.

Aphrodite interjected: don’t worry darling. Some of them would love you for that.

Mahdi shouted angrily: They can bogger off. Every person to have his own body.

Michael turned to the god again: Oh god you know all the secrets of the world. Please have mercy on us and lead us to the truth.

God replied in a miserable voice: I told you already, I have no clue. This damned turtle that the Akhonds have sent to the space is interfering with my galactic information system and has rendered most of the network useless. I am sure it was devil who thought them the trick.

If Mahdi was worried about the future dilemmas, the problems on earth were present and immediate. In Iran the Islamic regime was now facing existential threats. It was no longer possible to silence the resistance with executions. They would hang a person for an hour and once brought down; he would cough and rub his neck before punching the air and shouting patriotic slogans. Those executed by firing squads would call the name of Iran with perforated bodies once the guns were silenced. The victims of stoning would get up after the last stone was thrown at them and ask the crowd: Do you call yourselves humans?

Now everything was in disarray. A week after the Azrael had disappeared; Japan was full of bankrupt businessmen with Samurai swords through their bodies who were going from bank to bank looking for new credit cards.  The United States, Russia and all other arm exporting countries were facing severe economic problems after all arms orders had been cancelled by customers. Israelis and Palestinians were confused, not knowing what to do to each other anymore.

Israfel removed his trumpet from his lips and begged the god: Oh, your holiness please do something. Ten days have gone by and there is no news of Azrael. Do you want me to go down and blow the last trumpet?

God said disapprovingly: Don’t interfere in my affairs. I told you that this stupid turtle has damaged the whole information network. I never thought that the turtle would go exploring the space when I created it.

Raphael said: Perhaps we should send someone to finish off this turtle.

A boisterous burst of laughter filled the air and Azazel reminded him: This bastard would not go before lurking around for 500 years when there was someone to finish him off.

Gabriel murmured: I am sure the real culprits are the Akhonds.

When Khamenei opened his eyes and found Azrael by his side, he was about to suffer a heart attack. He looked at the Azrael and pleaded with fear:  You? But they said that you had disappeared.

Khamenei rubbed his eyes and focused on Azrael’s face:  Who? Ahmad? Eh, Ahmad, it’s you? Our very own Janati? What a stupid joke. You frightened me to death.

Janati replied: it’s not a joke Ali. I am the new devil of death. You however don’t need to worry; I have not come here on business tonight.

– What do you mean that you are the new devil of death?

– I mean that I have killed Azrael and I am now the new devil of death.

– You killed Azrael? How?

– Well, I tricked him. When he came for me, I told him that I had a last wish. I said no one ever realised who I was and what was going inside me in this world. Look through my ears to see the real me before doing what you have to do. He accepted and looked through my ears and that was his biggest mistake. He stepped back and looked at me in horror and said, oh my god; you have no soul, and fainted. I quickly sucked his soul and finished him off, and then I was fasting and praying to the devil for two weeks. His body is now under my bed.

– That’s the best news my friend. We were getting worried about the survival of the regime.

– Don’t fret; death is not in the hands of the god anymore. It’s now in the devil’s hands and you are even safer. As long as the devil is the king, you have nothing to worry about.

– Then, let’s go and praise the devil for winning this long battle against the god and his cronies.

All angels had gathered in the divine court beneath the god who now looked angry and vengeful. Then he addressed them with a decisive voice: You all know how that damned Janati has killed Azrael and has been appointed as the devil of death by his master.  There is no point. The world has been infected by Akhonds and cannot be saved anymore.  Uriel, from now you are the new angel of death. Israfel, get ready to go down and play your last trumpet. Mahdi, saddle your horse as it’s now the time for you to go down and roll off the heads of unruly bastards.