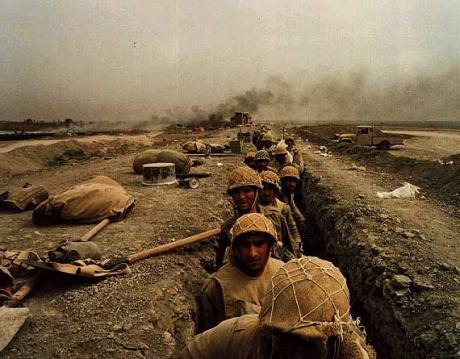 It was 30 years ago today, a beautiful first day of autumn in Tehran.  The leaves were turning brown, the hot summer was becoming mercifully tempered by the now cooler air from the Alborz Mountains. The universities had been closed by Khomeini’s government 5 months earlier for ideological reasons.  However, school age children all over Iran were busily rushing to and excited to attend their first day at school for the academic year. There was young energy and happiness everywhere.

And then it happened.

At 12:30 Tehran time, a force of almost 200 Iraqi jet fighters viciously attacked 11 cities in Iran, the majority entering Iranian airspace undetected.  Their targets were 8 Iranian airbases, 5 airports, 4 major army installations, early warning sites, and some refineries.  Simultaneously, 6 Iraqi armored divisions roared over the Iran Iraq border into the provinces of Khuzestan in the south, as well the central and northern sections of the border. Their objective was to capture Khuzestan and annex it to Iraq as “Arabistan”, with its capital “Al-Ahwaz”. The war was supposed to take only several days.  Instead it took 8 years, becoming the longest war ever fought in the 20th century.  It was also the only war in the 20th century in which all superpowers supported both sides and ensured that no side won.

The revolution had happened less than 2 years earlier, and the Ayatollahs had taken 52 American diplomats hostage less than a year earlier, thus isolating Iran tremendously and ruining its international image.  They also had systematically dismantled Iran’s armed forces, which Iraq had feared strongly for years before.  Many of Iran’s best officers, some of the most highly trained pilots, soldiers, sailors, and marines in the world had been purged from their duties-either expelled, imprisoned, or executed, imprisoned. While some were completely devoted to the former Shah, many would have gladly served their country but could not pass a religious/ideological screening.  Only several months before, the Nojeh coup attempt had occurred, and hundreds of Iran’s best pilots were in prison or decommissioned, and some of their most senior comrades executed without trial.

As a result of these actions, Iran had less than 1 armored division in Khuzestan, with virtually no command.  Its air force was at a small fraction of its former strength, and Saddam Hussein and his allies were convinced that this war would take only several days, and would be short.

But they had forgotten one thing-the resolve of the Iranian people.  Those advising Saddam ignorantly thought that Iranians were divided, and that those who could fight would not because they were at odds with their government.  They failed to realize that Iranians loved their country more than they hated their government.  Then president BaniSadr moved quickly to plead with the clergy to release hundreds of imprisoned pilots and other officers.  These pilots joined their comrades in the fight against the Iraqi invaders. They surprised the world when they showed the failure of Iraq’s air assault, and launched devastating attacks into all parts of Iraq, destroyed the Iraqi Navy and cut them off from the Persian Gulf. It would take almost two years before the Iraq invaders would be expelled from Iran at the great turning point of this war- the liberation of Khorramshahr on May 24, 1982.  The Iraqi invasion and Saddam’s sick dream of “Qadessiyeh” had failed miserably.  This was the greatest victory for the Iranian people in our modern history, and all Iranians fought side by side to show the world they are wrong and we are Iranians.  We will not submit to shame and we will not accept humiliation.

Today is 30 years later.  We must take lessons from those days very carefully.  We won and made Iran a graveyard for the invaders.  But we did so at a cost.  8 years later, after 1 million dead, thousands of innocent chemical victims, millions of displaced Iranian civilians, and almost $1 trillion in damage, the war came to an inconclusive end.  The world had armed Saddam, one of the most incompetent military men in middle east history, with whatever it took to prevent Iran from winning.  Saddam Hussein emerged from this war with one of the largest militaries in the world after 8 years, only to be crushed in 100 hours by the US led coalition in 1991.

In 1980, logic and reason said that Iran should have suffered defeat quickly, and Iranian people’s resolve overcame that massive obstacle.  It was not easy, and it was long and painful, and we and our children and grandchildren continue to pay for it.

I don’t ever want to see any war every happen again on Iranian territory.  This was our “Never again” experience.  Never again should an Iranian child be running from a barbarian’s missile fired at her home.  Never again should an Iranian child lose her father, mother, family, or home to aggressors.  Never again should any of our compatriots be put in a position where they hold a rifle and an RPG, and the other side has thousands of tanks, planes, and chemical weapons that they can use at will. We are Iranians. We want peace, and we, more than anybody else, know the value of peace.  We as a country should be on a path towards peace and strength, not confrontation and weakness.  We should have a strong positive international image, with a strong economy and industry, and a pluralistic modern system in which Iranians of all persuasions are included.  I will let the readers decide whether we have this or are even on our way to such a situation today.  But at least we can agree that that should be our goal.

The only victors in this war were the incumbent superpowers, their arms industries, and all those who benefitted from cheap oil.  The greatest losers of course, were the people of Iraq and Iran.

On this memorable day, I ask all Iranians and Iraqis to take a moment to reflect on this vicious conflict and its victims, and on all those wonderful people who are no longer with us.  I cherish their memories everyday, and ask “why”?  There is no good answer.  The only decent attempt at answering this question is to learn from our mistakes and make peace, coexistence, and tolerance a priority so more wonderful people don’t have to leave us in the future.  Perhaps then, and only then, can we say our loved ones’ lives were not lost in vain.

In the hope of that day.