Hossein is one of us 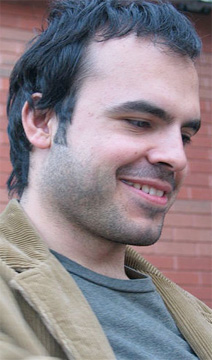 Blogger and Journalist Hossein Derakhshan‘s detention and trial have once again become a much discussed issue. Salman, a writer with the website Kamtarin, conducted an interview with Ozra Kiarashpour, the mother of Hossein Derakhshan about her son’s situation. Thanks to Khorshid Khanoom:

Hello Ms. Derakhshan, thank you for agreeing to the interview with us.

Hello, I really don’t know what will help Hossein and what will harm him, and the only thing I can do is to pray for him. These days I am really bewildered and so is Hossein’s poor father.

How is Hossein doing psychologically these days?

He is extremely overwhelmed and listless. He seems really depressed. He is really tired of being in limbo, being in jail, and being alone for two years. He says he spends most of the day sleeping. He recently requested to at least be transferred to the general ward but instead they agreed to move him to a different and better room, and potted a rose plant for him.

Are you able to visit Hossein?

For over a year we’ve had routine visitation with him once a week, but during the first eight months of his detention we had no visitation and didn’t know where he was.

How do the prison authorities behave during your visits?

It depends on who is there on any particular day but the majority of time they are respectful.

There are still some who doubt that Hossein is in Prison and there were even some who were saying that Hossein is staying at a villa in Zafaraniya [a wealthy area of Tehran] where he is helping the government. Don’t you think the reason for these rumors is linked to the fact that you haven’t really dealt with the media?

I pray that those people never have to endure the pain that we are going through. During the early months of Hossein’s detention we were very confused, didn’t know what was going on, and didn’t know what we should do.

On the one hand, Hossein had requested that we not speak to foreign media. And the domestic media wasn’t interested in us. Even with all of this, Hossein’s father and I wrote a letter to the Head of the Judiciary which was published in a number of places. And once the air cleared a bit, my daughter set up a blog to provide information about Hossein’s situation.

These two years have been very difficult for us. Hossein’s father had several cardiac episodes. At the time when they told Hossein that his father had had a heart attack, he wasn’t allowed to use the phone. My child cried so much and blamed himself so much, which was even more painful for Hossein’s father and I. But we didn’t even tell Hossein that his father was upset because half of what upset Hossein in prison has to do with us.

You wrote a post for the blog that you said was called “Justice for Hossein Derakhshan,” are you familiar with blogging and with computers?

Since my children are often travelling abroad, I have to use the internet as a means of communication. Could it be possible that I know nothing about blogging? The truth is that Hossein used to talk our heads off about blogging. All our suffering unfortunately started with Hossein’s blogging.

Had Hossein come to Iran by invitation of the government?

Hossein had had some conversations with Press TV about working in their Tehran office. Even during the days before his arrest, he would sometimes go to their office since we didn’t have high speed internet at home. Before his return to Iran, the High Council of Iranian Affairs Abroad promised Hossein that his trip would be without problem. He had cleared his trip with this Council which is governmental and which is in contact with the Intelligence Ministry. That’s why even though Hossein knew that they would call him to be questioned, he did not expect to be arrested like this and hadn’t told us what to do in case he was arrested. A representative from the Council told us that they pursued his case on behalf of the Council but that unfortunately they couldn’t do anything further. Why are there such splits in the country’s security apparatus?

Is Hossein accused of espionage?

Absolutely not. I don’t know how these people who constantly accuse Hossein of these things can live with their own conscience. If Hossein is a spy and had a security project, then why hasn’t the documentation for this turned up anywhere? And why wasn’t espionage part of Hossein’s charges?

What do you think the Judge’s ruling will be?

We can’t do anything about the judge’s ruling except to pray since other than God no one knows what the future will bring. The prosecutor has asked for the severest sentence possible to punish Hossein and to make an example of him. As Hossein’s mother, and not as someone whose family has sacrificed much for the sake of the Revolution, I want to ask why are they making an example of Hossein rather than making a role model of him? He is someone who repented and returned to serve his country and is ready to criticize his past thoughts and actions. Are you making an example to prove to people that repenting is useless? To show that supporting the ruling system will have this outcome? All these years, this family has been a steadfast supporter of this ruling system, and Hossein is one of us. It is not fair that you should punish him so severely for honestly conveying his life experiences over these years.

If Hossein is freed, will he leave Iran?

Hossein had grown really tired of living abroad and even now to make us feel better he says he may have been in prison these past two years in Iran but before that, living abrod was like being in prison.

Thank you for the interview, we hope that Hossein’s situation is resolved soon.

Source of the interview originally in Persian.

PrevPreviousWhat you talking about George?
NextNeoconservatives Dust Off “Appeasement” ArgumentNext