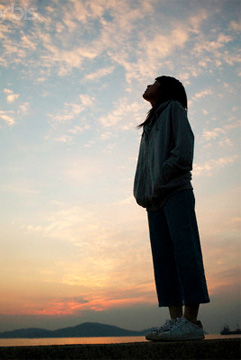 There were movies and books, and there was laughter about bad movies and resentment toward popular books, and they went on forever, somehow it didn’t matter how clever and inventive they were when they talked about them, those things went on forever, and the young man talking to the girl wanted her to know that he had accepted them, he had accepted that they were going to go on being bad and popular, and even the ones that weren’t bad and popular, when he talked about them, he no longer felt like he was talking about himself.

“They talk about outside things,” he said, speaking of the same friends he had dreamed of making when he came to the city, the same conversations he had dreamed of having. “I don’t even know what the thing is that we’re talking about sometimes. I want to tell them that I like the sky.”

“I know how it is,” she said. “The outside things and the inside things.”

“I guess there has to be some talk of outside things.”

They smiled at the secret that was too big to share – that maybe there didn’t, maybe there didn’t have to be a word that was said about a single thing outside of themselves, a single movie or a single book or even a single song, maybe they were enough already without a single thing that gave voice to their heart, maybe they were the voice to their heart. It was almost a way they weren’t supposed to talk. Two people weren’t supposed to start a romance without those outside things. Where was the dynamism supposed to come from? ‘If you like this, then you’ll like this.’ The sky was already there and how was anybody supposed to improve upon it?

The thing that got them was the thought that if you stripped away those outside things, couldn’t anybody be with anybody? If you took away every movie and every book and every song that somebody said to somebody, if you like this, then you’ll like me, then all they were left with was, you’ll like me. All they were left with was, you’ll like me because I’ve been trying, I’ve been trying very evenly and patiently sometimes, and other times very lostly and wonderingly. You’ll like me because I’ve been trying, but then again who hasn’t been trying, and so it was something very tiny to hold in their hand and as big and vast as the city around them as well, which was an exciting way for it to be, because they didn’t know themselves if love was meant to be something very tiny and fragile or something big and vast, but it was nice to be faced with those possibilities right from the start. All they had was trying, and if there was a movie that they both thought was lousy or a book that they both thought was good, they could’ve looked at that and said, there I am, and maybe that’s where love is too, and that would’ve been a place where they could hang their hat, at least for a few days. At least for a few days they could have looked at the world and said that in the middle of this whole thing, an agreement about a movie or a book is possibly the start of everything. They could have done that, but when they started with the inside thing, the sadness of love was contained in the first moment of it along with everything else. They could face the fear that maybe the inside thing was everybody’s inside thing.

And they could do it, they already knew they could do it because they were already willing to talk about inside things and outside things. But they already had a destination. It was the inside thing. It was where they wanted to go. They had already spoken of it like something that was there, and once they got there, they would not have a destination any more. It was nobody’s fault. The outside things went on forever and the inside things did too, but it was impossible to know that just then. It was impossible to know how something could be a destination and go on forever too, which was why when they said goodbye, there was a feeling of hello contained in it, but there was also deeper inside the goodbye, a feeling of goodbye contained in it as well. It would be a while before the young man understood that love was not the girl who felt lost about the things that he felt lost about, it was the girl who felt found about the things that he felt found about. Even if it was the same girl.