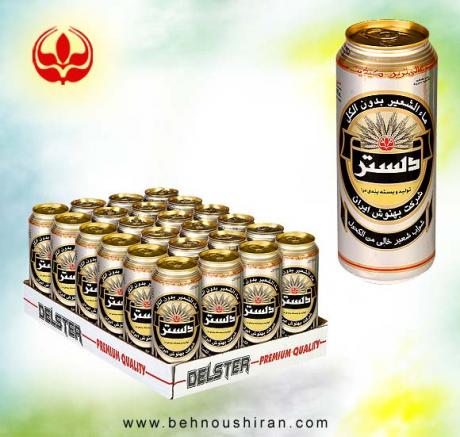 Surfing the web for international beer ratings, I ran into Delster by Iran Behnoosh Co. The beer can says “non alcoholic” in both Farsi and Arabic. It better be non-alcoholic; the Mostazefan foundation is a 63% shareholder. Sadly, Oil Company retirees hold only 1.3% of the company shares or Iran Behnoosh may have been steered in the direction of sneaking a bit of real beer into the brew.  As one beer taster on the site says, “Open up, add yeast, let it sit for a week and try again.” Good fermentation advice!

Others on the site compare the flavor to dishwater, cardboard and paper, though one commenter says the sweet taste is a welcome alternative to mint tea at mealtimes. I wonder what part of Iran he/she was visiting. I have rarely had mint tea served during Persian meals. Maybe he mistook doogh for Persian tea.  Suspicious that the negative responses were politically motivated I searched under some American non-alcoholic beers. Coors non-alcoholic drew the following comment: “Pours a clear piss yellow hue with a medium head that dissipates, leaving a scrim of foam full of big ugly bubbles…overall very bad.”   There goes my conspiracy theory.

By the way, the Lagunitas IPA they make near my hometown in California has pretty good ratings. Here’s one comment I quite agree with: “Pours with a golden body and a white head. Floral hop aroma with lots of tangerine. Some orange blossom honey too as well as perfumey notes. Taste is hoppy, citrus, tangerine, kumquat and fresh honey biscuit dough. Body is light and thin (in a refreshing way). Very sessionable.”     Living in the diaspora has its advantages.