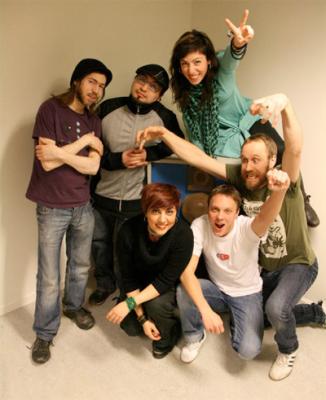 The Abjeez Band will be coming to the San Francisco Bay Area on Saturday, December 4, 2010, to perform at the Great American Music Hall.  I had a chance to chat with Melody (a.k.a. AbjeeZooloo!) of Abjeez Band this week.  The fabulous band is kicking off their American tour in the San Francisco in a short few weeks, and I wanted to find out what to expect so that I could come and tell you!  Here it is:

So, are you guys ready to start your much-awaited US tour?

Yes!  The rest of the band will be joining me by the end of the month and we will start our tour.  San Francisco is the first leg of their tour.  From here we will go to Los Angeles on December 11, Washington DC on December 16, and Atlanta on December 18.

Will your new album be ready in time for this tour?

Our new album is, unfortunately, not quite ready yet, but we will be performing some of our new songs during our tour.  We don’t have a manager, so most of my time and Safoura’s time has been spent on planning the tour and our time for creativity has been limited.  We do the work of a several-person production team all by ourselves!

There is a lot of theatrics in your music videos.  What is the motivation for the theatrics?

When we first started our live performances in Sweden and other places in Europe, because our audiences couldn’t understand our Farsi lyrics, we had to use body language to convey the meaning of our music.  This has stayed with us.  Another reason for this  is that most of our lyrics are written like short stories, and they lend themselves to the theatrical element in our music videos.

I am continually dazzled by the intelligence of the new generation of Iranian music artists I have been seeing and hearing recently.  The new artists seem to have social and political messages and ambitions, more so than the previous generation’s music artists.  What do you think the reason for this is?

Most Iranian singers don’t write their own songs; other people write the lyrics and the music for them.  It is not reasonable to expect those singers to speak passionately and expressively about their lyrics.  Most alternative music bands write their own lyrics, and it is natural that when they talk about their music and its message, they would speak more passionately, owning the sentiments.  We are only one of the emerging numbers of music artists who use their music to convey a message.

Chatting with you about a wide range of topics, it’s clear to me that you are very intelligent, well-studied, and very real human being.  How has the rock star fame affected you?

I doubt being intelligent is a limitation!  Fortunately for us, Safoura and I have been able to put a distance between our artistic world and our personal lives.  Once we step off that stage, we become ourselves again, and so far the fame has not taken us over!   This has not been easy.  It is very hard to receive the attention and to stay real!  I don’t know how far I can do this, because fame limits one’s privacy, but so far, I have been honest with myself, remembering who I am, what I am, and where I have come from.  Fame could be very frightening.  Sometimes you have to pull into your own cocoon to protect yourself and to deflect attention.

Can you tell me a little about your parents?  They must have had a lot to do with your path into music.

My parents live in Sweden.  They are very enlightened individuals.  They never pushed us to do anything, not even to pursue our education.  My mother always just said ‘pick whatever you want to do, and strive to do your best and to become the best in it.’  When my Mom noticed that Safoura liked music, she told her to go and reach for becoming the best guitar player in the world.  My brother and I grew up in Iran and we had access to fewer resources, but whatever they could do for us, they did.  Safoura grew up in Sweden and had access to more resources.  When Safoura said liked to learn flamenco music, they sent her to the best flamenco school in Spain to learn.

My parents have really valued our music as something that we could do as our main professions and careers.  My parents were, and continue to be, our first and best fans.

How did you guys come about forming a two-sister band?

When we first started to write our lyrics and music in 1997, our kind of music did not resemble any other kind of Iranian music.  Even bands that performed rock and alternative music back then, didn’t write to-the-point critical lyrics like ours.  There wasn’t a lot of humor in the lyrics to Iranian musicians’ music.  Even when lyrics tried to define or describe a daily affair, things were always said so poetically and dramatically.  It seemed whatever was ever said or described in the lyrics, was always relayed indirectly, sugar quoted, to the point where “sunshine” and “mountains” and “rivers” always meant something else.  This was because of censorship, mostly self-censorship, whether because of politics or because of religion.

When we first started our work, we were a lot younger and we spoke according to our age.  This was something interesting and somewhat different about us.  Also, there was something about a band comprised of two women, two sisters; this made us interesting to people.  There weren’t that many female Iranian musicians with a different slant on music and lyrics at the time.  That’s why whenever people heard our music, they would tell us that we really had to record our songs, and to perform them onstage.  When we realized that there was a lot of reception for this kind of music, we started thinking about performing it outside of the circle where we lived.

We used to travel to Iran a lot back then.  During one of our trips to Iran, we thought to check and see how people reacted to our music.  Playing our music in Iran, we realized that Iranians inside Iran loved us even more than Iranians outside Iran!  We even received a lot of support from musicians inside Iran, who encouraged us to continue our musical work.  We decided to form a band to record our work in Iran.  We even thought of forming the band in Iran, so we got together with our wonderful friend, Shahrouz Molaie, the Kiosk Band drummer, in Tehran.

Shahrouz took us to a studio in Tehran and we recorded our demo CD, with just our voices and Safoura’s guitar.  We thought of getting together with the musicians who were there, Shahrouz’s friends.  Then we realized it would be too hard to have a band in two different continents and to do things illegally in Iran, as it was illegal for women to sing, etc.  We thought we would have to be fearful and vigilant all the time, and we didn’t like it.  So we decided to form our band in Sweden.

Forming the band in Sweden seems to have worked!  Your other band members are all non-Iranians.  How did that come about and how do you and Safoura make it work with them?

Safoura invited musicians, people she had come to know during the past 13-15 years, to come and form the Abjeez Band with us.  So, we invited her musician friends and formed the Abjeez in 2005.  The band members have remained the same since 2005 without a change, and we believe this is one of our success secrets.

We are a family, the Abjeez family.  We grew up together like this.  Though our other band members don’t speak Farsi, they feel close at heart with this music and their Iranian audience.  They are all professional musicians who have been earning a living as musicians for years.

Abjeez is an independent band, and has not made a lot of money yet, but now if the Abjeez have a tour, they will make it their priority to travel with it.  Abjeez is not just an entertainment music group, we all see it as a tool to convey our message, to talk and play music through it.

We always explain the lyrics and translate them for the other band members.  All the decisions in Abjeez must make sense and everyone must agree with it.   Safoura and I make the final decisions, but we never do anything without consultation.  In our statements, our videos, anything we do, we make sure everyone feels comfortable with it.

Absolutely not!  We support the people of Iran in their quest for freedom and their rights.  So we remain green.  If Iranians inside Iran want to become pink tomorrow, we will become pink, too!  We don’t think that all the people who stepped out onto the streets agreed on the same person or leader, but they were all united and they all got behind one symbol, the green symbol.

As for why some people might have become regretful about stepping in to support the Greens, I think I understand the reason.  Iranians are emotional and temperamental.  We expect everything to happen overnight, so when people did not remain on the streets, some people became disappointed with the green movement.  Thank God things don’t change overnight!  That would be too dangerous.

You routinely perform for non-Iranian audiences, who like your music and come to your performances.  What do the Swedes think about your music?

They don’t get the lyrics, but they love the fusion that Safoura makes in her music which has traces of flamenco, reggae, rock, and eastern themes.  These are interesting to them.  Europeans are more open to world music, therefore whatever is new and different creates curiosity in them.  One of the things they tell us after our concerts is that they appreciate the live performances themselves, the theatrics offered onstage.   Somehow, they get engaged with us and follow us.  For our part, we bring our audience along with us, just like a trip we take together.