Journey Without a Camel 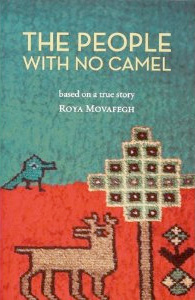 I paused when I saw the title of Roya Movafegh’s first book, The People With No Camel. The grammar, the possible meaning, and her choice of imagery made me wonder – and want more. This is the reader’s first clue that The People With No Camel is not just another Iranian woman’s post-Revolution memoir. Upon opening the book she explains: “According to the laws of Sharia in Iran, if a Muslim man is murdered, his family may be compensated according to the price of one hundred camels. If the same crime is committed against a Muslim woman, her family is entitled to the price of fifty camels. If a Bahai is murdered, no camels apply. I am of the People with No Camel.” So, the image conveys the gravity of the circumstances she will introduce to her readers, in spite of the fact that the story is re-counted through a ten year-old girl’s point of view. The allegory of “the people with no camel” launches a powerful narrative, and depicts the odds faced by a peace-seeking people, where over 300,000 Bahais remain in Iran, deprived of basic rights of education, employment and assembly, and if their leaders survive, languish in prison following sham court trials.

The choice of this imagery reflects Movafegh’s sensibilities as an artist and activist. An accomplished photographer, she has contributed to acclaimed publications while also dedicating her work to improving the lives of young people. In 1998, while living in Harlem, NY, she founded The Young Harlem Photographers, a prize-winning photography workshop for children and youth, and then co-founded the acclaimed Children’s Theatre Company of New York. As she describes, her “art-based programs for children and youth [are] dedicated to endeavors that highlight their inherent nobility, raise social awareness, and encourage becoming agents of change in the world they are inheriting.”

In light of these experiences, it’s no surprise that Movafegh’s story foregoes tracing the comforts of life in Tehran as a young girl to tell a story of flight, in continuous motion. Now she is a mother to two daughters, but having actually escaped Iran as a child, she is able to offer a perspective at once innocent and simple, while conveying the gravity of escape from random, violent, dictatorial rule. Unlike her parents’ concerns, she doesn’t have to know the details of how much cash remains after paying off various middlemen and surprise visitors, or where the next meal in a Pakistani outpost will come from, or how to approach foreign consulate offices that can grant asylum on a whim. But as the responsible first child and obedient daughter, she musters her courage to gain her little brother’s cooperation and helps shed her parent’s angst. Her perspective as a girl, an Iranian, a Bahai, an escapee and now, an artist and a mother, adds an important voice to those on escape to freedom.

At times The People With No Camel had me on the edge of my seat, like during tense border crossings when the family was disguised as Afghan mountain dwellers, crammed in the back of a truck, hiding their Iranian passports by no better means than sitting on them and coaching the children to feign sleep so as not to be questioned by border patrols. It’s been years since I read The Diary of Ann Frank, but Movafegh’s story reminded me of that classic, with the voice of a precocious young girl illustrating the plight of a people.

In the last section of The People With No Camel the artist Movafegh departs from her girls-eye view to paint a parable invoking classic characters from ancient Persian mythology. The allegory weaves a tale involving oppression, freedom, idealism, disappointment and detachment. It shows us freedom is hard won and rarely what we expect.

Persians revere their mystical poet heroes like Hafez and Rumi. Settling in to the style of Movafegh’s fantasy-parable section, I was reminded of transcendent language that is more suited to a contemplative reading for symbols than the short attention span skimming so many of us modern readers may be used to. In the end, like her gift of freedom, The People With No Camel offers a vital, bittersweet contribution to understanding the perils of modern-day courage and displacement, and sheds light on the story of human rights violations that continues to play out in Iran today.

AUTHOR
Homa Sabet Tavangar is the author of Growing Up Global: Raising Children to Be At Home in the World, a Visiting Scholar at the University of Pennsylvania, and contributor to PBS.org.