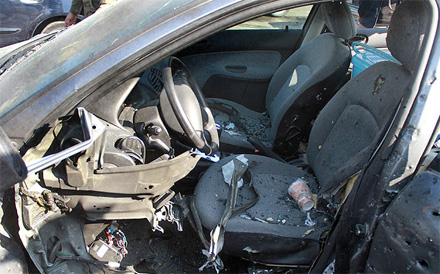 Once again two scientists with nuclear connection have been subject of bomb explosion. Majid Shahriari was an Elementary Particle physicist, and a member of the Scientific Board of Beheshti University. He was driving to work with his wife when the explosion occurred near the intersection of Imam Ali and Artesh Freeway. He was killed and his wife survived with injuries. The assailants riding motorcycles attached magnetized bombs to the car. The other victim of bombing was Dr. Fereydoun Abbasi Davani, an assistant professor of nuclear engineering at Beheshti University. His expertise was in Lasers. An observer driving behind him described that he stopped the car and reached in the back to help his wife out. They were couple meters away from the car when explosion occurred blowing the door off. Tehran Chief of Police, Hossein Sajedinia said no group or individuals have claimed responsibility or suspects taken in custody. He claimed that it is the work of the “lackeys of the Zionist regime”, Great Britain, United States and MkO. He also added “the protection of the professors is the responsibility of the universities and the defense ministry. They are the ones who must answer for this”.

These two bomb attacks were similar to the one that killed Massoud Ali Mohammadi in January 12, 2010. In his case the bomb was attached to a motorcycle close to his car. It was detonated by a remote control.

Certainly, it is a confusing and a difficult issue in trying to figure out who is responsible for attacks on these scientists with connection to nuclear knowledge or Iran’s nuclear program. In article “Assassination: One by One, October 25, 2010, Iranian.com, by this writer, mention was made of SESAME which stands for Synchrotron-light for Experimental Science and Applications in the Middle East.

SESAME is a major project for research center as a cooperative venture by the scientific and government of the region. It is developed under umbrella of the UNESCO on May 30, 2002. The Center is located in Jordan and funded by the members. The present council members are: Bahrain, Egypt, Israel, Jordan, Pakistan, Palestine, and Turkey. Iran and UAE are in the final stages of becoming members of the council. The observers are Germany, Greece, Italy, Kuwait, Russia, Sweden, U.K., and U.S. – the Synchrotron machine is donated by Germany and is in process of assembly. It is a 2.5 GeV SESAME ring that will cover a broad spectral range from the infrared to the hard x-ray parts of the electromagnetic spectrum. It provides for studies, workshops and schools on accelerator science and technology, material research and Structural Molecular Biology.

Majid Shahriari was an elementary particle physicist and a member of scientific Board of the Beheshti University. He knew Ali Mohammadi. Shahriari was a member of the SESAME Project. There was a four men team that was originally assigned to represent Iran. Ali Mohammadi, official representative, Dr. Babak Shokri, another official representative, Dr. Javad Rahighi, a consultant, and Majid Shahriari, a consultant. Of the four, two of them have been assassinated in the same manner: Mohammadi and Shahriari. Davani is a survivor of assassination. Shokri and Rahighi have been safe.

Fereydoun Abbasi Davani is an assistant professor of nuclear engineering at the Beheshti University and expert in Lasers. He is in a list of figures suspected of links to Iran’s nuclear activity in the 2007 U.N. sanctions resolution which puts a travel ban and asset freeze on him. The resolution describes him as a defense ministry scientist who works closely with Mohsen Fakhrizadeh (also under sanction) who heads the nuclear project. Davani has been a member of the Revolutionary Guards since 1980. He has served three tours of duty in the Iran-Iraq war. Davani and Mohammadi were non-resident researchers at the Institute for Research in Fundamental Science (Pajouheshgah Daneshhayeh Bonyadi). Both were colleagues in Imam Hossein University. This university is divided in two parts: one instructs the officers of the IRGC and the other is for qualified general public. They both are also linked to Institute of Applied Physics, which does research for Iran’s nuclear program. In summary:

1. We have learned that Mohammadi had more involvement with Iran’s nuclear program than we knew previously.

2. SESAME is supported by all government participants including Iran. If Iran did not want to be a part of it, or ban its scientists from membership they simply could just do that.

3. Mohammadi was known to be a Green Movement Moussavi supporter. So are many others in upper positions. Would that be of any consequence to assassinate him verses his beneficial contributions in research and instructing the new generation of scientists.

4. Shahriari and Davani have had immaculate record of service and devotion to their work. Why would the Islamic Republic want to eliminate them?

There are numerous questions relative to conclusions that one may draw. When asked about Iranian accusations, Israeli government spokesman Mark Regev said Israel does not comment on such matters. The U.S. State Department spokesman P.J. Crowley said, “We decry acts of terrorism, wherever they occur. And beyond that, we do not have any information on what happened”.

We may still, not has all the information to draw a definite conclusion. The present facts have me to a point of giving the Islamic Republic the benefit of the doubt.