Who’s a threat to peace? 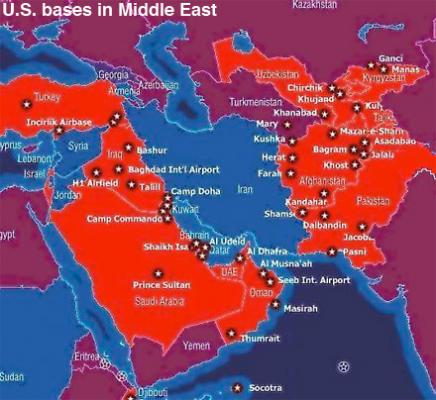 The latest batch of Wikileaks revelations give the impression that, next to Israel, it’s the Arab states that are most energetically pressuring the U.S. to attack Iran. In terms of the real threat to Iran, that ‘s definitely putting the cart before the horse.

In the first place, the Arab governments mentioned as being hostile to Iran – Saudi Arabia, Egypt, Jordan, Bahrain, Abu Dhabi and the United Arab Emirates – are all undemocratic, unpopular regimes that depend on U.S. support to stay in power. As such, they seem to have absorbed the unrelenting years of U.S. claims that Iran is the region’s greatest threat to peace.

A completely different view, however, is held by these governments’ own subjects, among whom Iran’s independent stance actually is hugely popular. According to a recent poll (1) that asked Arab people in Saudi Arabia, Egypt, Jordan, Lebanon, Morocco and the United Arab Emirates to name two countries they thought were the greatest threat to the region, 88 percent said Israel, 77 percent said the U.S. and only 10 percent mentioned Iran.

Meanwhile, governments in the region that don’t hold a hostile view of Iran include those of Iraq, Afghanistan, Syria, Lebanon and Turkey, not all of which are hostile to the U.S.

As to where the real threat to Iran comes from, it should be remembered that, despite massive US arms sales to Saudi Arabia (2), not one Arab country has the military capability of launching a serious attack against Iran. Only one country in the region has that ability in the region: Israel.

But Israel is dependent for its continued existence on its $3 billion in annual U.S. subsidies, plus the diplomatic firewall the U.S. maintains for it in the U.N. Security Council. There is almost no way Israel could attack Iran unless it were first fully confident that it would be backed by U.S. forces, either because it had already received a green light or because it calculated Washington would have no other choice.

Without a doubt, Iran does represent a threat to U.S. imperial interests in the Middle East. Thanks to its large oil and gas reserves, and the fact that those resources are controlled by its government, Iran has been able to emerge from a devastating Western-supported eight-year war of aggression by Iraq as an independent economic, military and political regional power. Iran takes no orders from Washington or London, its natural resources are off-limits to exploitation by Western corporations and it has no love for the wealthy, corrupt, pro-Western governments that dominate the area.

As such, Iran represents an obstacle to the hegemony the U.S. desires. But openly declaring hegemony to be its goal would win no friends among either local governments or populations, so the U.S. has resorted to fabricating the myth of an Iranian nuclear weapons program, much as it promoted support for a war against Iraq by creating a myth about weapons of mass destruction, ties to al-Qaeda and links to the attacks of 9/11. President Bush also authorized support for a number of terrorist organizations to destabilize the Islamic Republic of Iran. (3)

Although the U.S. has been charging for some eight years that Iran is using its nuclear energy program as a cover for the development of nuclear weapons, it has never provided the first shred of proof. And yet, U.S. charges of an Iranian nuclear weapons program have formed the basis for four sets of U.N. sanctions against Iran.

The latest, implemented in June 2010, has been based on “evidence” the U.S. provided of alleged Iranian plans to redesign a certain kind of missile to accommodate nuclear warheads. However, as revealed recently by investigative reporter Gareth Porter, the “evidence” refers to an outmoded missile Iran had stopped using years ago. It is simply a fabrication similar to the fabricated evidence against Iraq (4).

Despite some disagreement over how much of its nuclear-related activities Iran is legally required to disclose, the U.N.’s International Atomic Energy Agency, charged with monitoring compliance with the Nuclear Non-Proliferation Treaty, reported on Nov. 23 of this year that it “continues to verify the non-diversion of declared nuclear materials in Iran.”

And in the Arab poll referred to above, 77 percent said that Iran should have the right to its nuclear program and should not be pressured to stop its activities.

No, the principle threat to peace in the Middle East, at least as regards to Iran is concerned, remains the United States, which for years, prodded by nuclear-armed Israel, has declared that, in dealing with Iran, “all options are on the table.” As such, the onus is on the U.S. to remove this threat once and for all.

On Dec. 5, Iran is scheduled to begin revived negotiations with representatives of the five permanent U.N. Security Council members, plus Germany. This would be an ideal time for Washington to make the following declaration: that it will not attack Iran, will not allow an attack by Israel, will end all sanctions against Iran, will recognize Iran’s right under the Nuclear Non Proliferation Treaty to pursue peaceful nuclear power, will return Iran’s nuclear file from the U.N. Security Council to the IAEA in exchange for Iran’s stated pledge to allow the intrusive inspections of the IAEA’s Additional Protocol and will agree to discuss all outstanding differences in a spirit of mutual respect.

Phil Wilayto is a member of CASMII’s Board of Directors and author of “In Defense of Iran: Notes from a U.S. Peace Delegation’s Journey through the Islamic Republic.”

A shorter version of this article appeared on Guardian’s website. Another version appeared in the Guardian newspaper today.