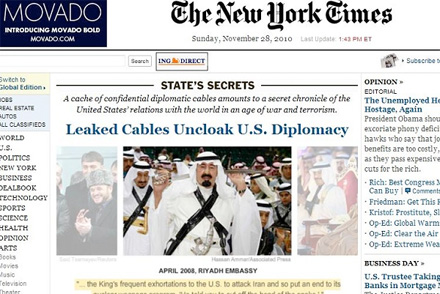 The dominant theme that emerged in U.S. media coverage of the first round of Wikileaks diplomatic cables last week was that Arab regimes in the Gulf – led by Saudi Arabia – shared Israel’s view that Iran’s nuclear program had to be stopped by military force, if necessary.

The New York Times generated that version with a front- page story featuring an alleged quote by King Abdullah of Saudi Arabia urging the United States to “cut off the head of the snake”, as well as other statements by Gulf Arab leaders suggesting support for military action.

“The cables reveal how Iran’s ascent has unified Israel and many longtime Arab adversaries -notably the Saudis – in a common cause,” the Times claimed.

The notion that these leaders, like Israel, favor a military solution to Iran’s nuclear program has become widely accepted by the news media in the past week. In a curtain-raiser to this week’s talks in Geneva between Iran and the world’s most powerful nations, for example, the Washington Post Monday asserted that the Wikileaks disclosure “show[ed] that Persian Gulf leaders have pressed for a military attack on Iran’s nuclear facilities…”

But a careful reading of all the diplomatic cables reporting the views of Saudi and other Gulf Arab regimes on Iran shows that the Times’ account seriously distorted the content – and in the case of the Saudis, ignored the context – of the cables released by Wikileaks.

The original Times story, headlined “From Arabs and Israelis, Sharp Distress Over a Nuclear Iran”, referred to “a largely silent front of Arab states whose position on sanctions and force looked much like the Israelis”.

Israeli Prime Minister Benjamin Netanyahu and his U.S. neo- conservative backers immediately seized on the story as confirmation of what Israel has been saying all along.

In fact, the cables show that most Gulf Arab regimes – including Saudi Arabia itself – have been seriously concerned about the consequences of a strike against Iran for their own security, in sharp contrast to Israel’s open advocacy of such a strike. They also show the United Arab Emirates (UAE) and Kuwait expressing that concern with greater urgency in the past two years than previously.

Those facts were completely ignored, however, in the Times’ account.

The most widely cited quote in support of the Times’ thesis since the story’s publication one week ago has been Abdullah’s appeals to “cut off the head of the snake”, referring to Iran. The story asserted that the Saudi ambassador in Washington, Adel al-Jubeir, had recalled the king’s “frequent exhortations to the U.S. to attack Iran” during an April 2008 meeting with Gen. David Petraeus, the incoming chief of the U.S. Central Command (CENTCOM).

The implication was that al-Jubeir had made that statement during the Petraeus-Abdullah meeting. But the reporting cable makes clear that the Saudi ambassador made the remark two days later, in a conversation with the U.S. Deputy Chief of Mission in Riyadh, Michael Gfoeller.

In his meeting with Petraeus, in fact, Abdullah had not spoken about Iran’s nuclear program but focused instead on the importance of “resisting and rolling back Iranian influence and subversion in Iraq”, according to the cable.

The cable actually draws a contrast between al-Jubeir’s remarks and those made by Foreign Minister Saud al-Faisal and director general of intelligence Prince Muqrin during Petraeus’s visit. “On the other hand,” it states after citing al-Jubeir’s position, the foreign minister “called instead for much more severe U.S. and international sanctions on Iran, including a travel ban and further restrictions on bank lending.” Prince Muqrin “echoed these views”, according to the cable.

The foreign minister would only say that “the use of military pressure against Iran should not be ruled out,” the cable said.

That statement mirrored precisely the official position of the George W. Bush administration at the time.

Even if Abdullah had in fact offered explicit support for a military attack against Iran in the meeting with Petraeus, however, that would not be a reliable indicator of Saudi policy toward the issue, according to Chas Freeman, a veteran diplomat who served as Washington’s ambassador to Saudi Arabia from 1989 to 1992 and maintains contact with top Saudi officials.

Freeman told us that such a statement would “fit a pattern of communication with the United States of ingratiating themselves with their protector”.

Significantly, in that respect, the Abdullah-Petraeus meeting came three months after President Bush had visited Riyadh seeking support for a more confrontational stance against Iran; five weeks after Petraeus’s predecessor at CENTCOM, Adm. William Fallon, had been fired in part for public statements that there would be no war against Iran; and less than a month after Vice President Dick Cheney had reportedly sought support for military action during his own visit to the kingdom.

Thomas Lippman, former Washington Post Middle East bureau chief and an adjunct scholar at the Middle East Institute, who has written a book on Saudi-U.S. relations, also said that the Abdullah quote would have been in line with the usual Saudi pattern of “telling the Americans what they wanted to hear”.

“They wanted to be assured that they would be under the protection of the U.S.,” Lippman told us.

In fact, the cables covering the period since President Barack Obama took office suggest that Saudi views have given even greater emphasis to political and economic strategies in dealing with Iran than was the case in 2008.

A Feb. 10, 2010 cable from Riyadh, for example, reported that Abdullah, disillusioned with U.S. blunders in Iraq that have given Iran the upper hand there, “had concluded that he needs to proceed with his strategy to counter Iranian influence in the region”.

The new Saudi strategy, according to the cable, features promoting reconciliation between Hamas and the Palestinian Authority combined with expanding relations with Russia, China and India to create “diplomatic and economic pressure[s] on Iran that do not directly depend on U.S. help”.

UAE Worries About a “Preemptive Strike”

As for the UAE, the Times’ account of the cables suggested an evolution in its thinking from earlier warnings that a U.S. or Israeli military strike would be “catastrophic” to a far more hawkish position. In February 2007, a cable quotes Mohammed bin Zayed Al-Nahyan, the Crown Prince of Abu Dhabi, as saying that the Iranian nuclear programme “must be stopped by all means available”.

That exhortation, however, was put in a different context by the diplomat who reported on his conversation with bin Zayed, who also serves as deputy supreme commander of the UAE armed forces.

The diplomat noted that such “tough talk on Iran” should be “taken in the context of strong UAE interest in acquiring advanced military technology”. Indeed, the UAE at the time was negotiating agreements to buy a record $17 billion in U.S. arms over the next several years.

Despite bin Zayed’s bluster, the U.S. diplomat wrote in the Feb. 7, 2007 cable, the UAE “is clearly nervous about any U.S. actions that could upset their much larger and militarily superior neighbor”.

Indeed, two years later, the crown prince told visiting U.S. special representative for Afghanistan and Pakistan Richard Holbrooke that a “military solution would only delay [Iran’s nuclear] program, not derail it” and that “war with Iran would only harm the UAE”. He also said he was “deeply concerned” over a possible Israeli military strike which, he added, “would have little impact on Iran’s capabilities,” according to an Apr. 5, 2009 cable.

He repeated his concerns about an Israeli attack to other high-ranking U.S. visitors three months later. After a Jul. 15 meeting between bin Zayed and Treasury Secretary Timothy Geithner, the embassy reported, “Without timely and decisive action by the United States, MbZ believes Israel will strike Iran, causing Iran to launch missile attacks – including hits on the UAE – and to unleash terror attacks worldwide.” He then suggested that “the key to containing Iran revolves around progress in the Israel/Palestine issue.”

According to a Jul. 23, 2009 cable, the prince subsequently declared to visiting senior State Department officials that “[Iranian President Mahmoud] Ahmadinejad is Hitler” – a remark highlighted in the Times’ account that has also gained widespread media attention.

But the cable reported further expressions of alarm over the prospect and possible consequences of an Israeli pre-emptive strike. The prince called for Washington to immediately begin “joint planning” with the UAE to address such a “worst-case scenario”.

Most recently, a Feb. 22, 2010 cable has the UAE’s foreign minister, Sheikh Abdullah bin Zayed Al Nayan, warning a visiting delegation headed by Rep. Nita Lowey, a strong supporter of Israel in Congress, that any “crisis or confrontation in the region [over Iran’s nuclear program] would create oil supply problems world wide.”

According to the cable, the minister ended the meeting with a “soliloquy on the importance of a successful peace process between Israel and its neighbors as perhaps the best way of reducing Iran’s regional influence.”

“Iran Has Not Bothered Us”

While confirming growing Arab fears about Iran’s regional clout and nuclear ambitions, the cables suggest that other Gulf Arab leaders – with the possible exception of Bahrain’s King Hamad, the only regional leader with a majority Shi’a population – have little or no appetite for military action against Iran.

“A year or two ago, many in Kuwait hoped a silent, targeted strike would take out the troublesome reactor and leave the region more relaxed,” a cable quotes a senior foreign ministry official who also happens to be the son of Kuwait’s prime minister as recalling to his U.S. interlocutor last February.

“Now, however, they feared that any effort to disrupt the nuclear program, either military or through tough sanctions ‘would go badly for the West,'” according to the cable, which quotes another official as saying that, while the emirate was worried about Iran’s nuclear program, it was “equally concerned about military preemption” and the retaliation that was likely to follow.

Qatar, meanwhile, is unwilling to “provoke a fight” with Iran, according to the emir of Qatar, as reported in a February 2010 cable on a meeting between the emir and Senator John Kerry. The emir explained that Doha would not “provoke a fight” with Iran, because its primary interest was a natural-gas field it shared with Tehran. He added that Iran “has not bothered us” during the history of relations between the two states.

A Feb. 2, 2010 cable makes it clear that the sultan of Oman, who has given the U.S. access to three military bases on its territory, is determined to maintain balance between Washington and Tehran. The cable reported that Muscat had twice rejected official U.S. offers to include it in a collective missile defense system aimed at Iran in 2009.

As for Bahrain, the Gulf’s only Shi’a-majority sheikhdom and host of the U.S. 5th Fleet, the Times quoted a November 2009 cable in which King Hamad al-Khalifa declares that Iran’s nuclear “program must be stopped” and warns that “[t]he danger of letting it go on is greater than the danger of stopping it.”

No other cable from Manama elaborates, however, on what means the U.S. or other countries should use to halt the program.

Gareth Porter is an investigative historian and journalist specialising in U.S. national security policy. The paperback edition of his latest book, “Perils of Dominance: Imbalance of Power and the Road to War in Vietnam”, was published in 2006.

Jim Lobe‘s blog on U.S. foreign policy can be read at http://www.lobelog.com.