Shooting the Heart of the Monster 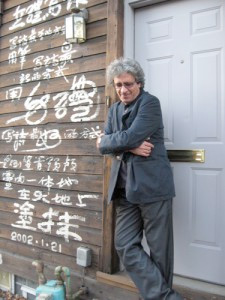 Boy meets girl. Boy falls in love with girl. Boy battles ghosts assassins, flees morality police, and has his thoughts crossed out by a writer trying to get his story past the Ministry of Culture and Islamic Guidance.

Welcome to Censoring an Iranian Love Story, Shahriar Mandanipour’s innovative novel that braids together the story of a writer attempting to pen a romance acceptable to the censors and the tale of two young lovers trying to connect in a country where being together could cost them their lives.

“I can’t get back inside the country because of this book,” Mandanipour told the audience at his City of Asylum/Pittsburgh reading. Mandanipour is regarded as one of the most accomplished contemporary Iranian writers, but was unable to publish in his native country for six years. Currently, he is a visiting scholar at Harvard University. Censoring an Iranian Love Story is his first novel translated in English.

As he explains in this interview with Sampsonia Way, censorship “dominates his soul,” even though he lives in America. But the Iranian imagination, according to Mandanipour, can create subversive and sexy stories in the blanks of the censor’s redactions.

Why did you leave Iran?

In 2006, I came to Brown University with the intent of going back after a year. Then Mahmoud Ahmadinejad was elected and censorship got worse. After I spoke out against censorship, my friends told me not to come back. Then I published my novel, got an appointment at Harvard, and year by year, time’s passed. Sometimes I can’t believe that five years have already passed.

How did censorship get worse under Ahmadinejad?

Under the Islamic constitution, censoring books is forbidden, but the Ministry of Culture and Islamic Guidance created a trick. You can publish your book, but you have to get a permit to get the book out of the publishing house. To get the permit you have to be cleared by the ministry.

How strict they are depends on the political situation. Under Ahmadinejad it’s insane, really insane. The censors know nothing about literature. They are foolish people who are afraid that if they permit a book, they will find out later there’s something behind the sentences and it will be a headache.

If it dominates your soul, can you be free of censorship even after you leave Iran?

You began writing seriously while fighting in the 1979 revolution, which overthrew the monarchy and replaced it with an Islamic republic. What was that experience like for you?

I told myself, “Shahriar, you are going to be a writer and there is a war. You shouldn’t be at your house.” I don’t regret that experience, although war is regretful in the end. You have to kill or be killed. You will lose your best friends, your best soldiers. Around 15 soldiers in my platoon died, some in my arms.

To keep my mind safe I wrote. Because of the violence, I decided to write a love story. As I wrote, I would hear the Iraqi artillery shooting mortar shells. It takes a shell about three seconds to get to you. You hear them shoot and know a mortar shell is on its way. Sometimes, I’d have to choose a word in those few moments between death and life. It could be my last word. Never mind if I died and nobody read my story. If I could find the best word, it’s life. It’s good, it’s beautiful.

You fought for the country that now censors you and forced you into exile. Do you feel betrayed by your country?

I didn’t think about it that way. I love my country. It gave me everything. It gave me my language and my prose. But right now it’s a place of great suffering. Iran is a rich country, but Iranians are getting poorer and poorer as a result of this regime. Hundreds of students are in jail, being tortured, in solitary confinement. Hundreds of Iranian activists are in jail.

Don’t judge Iranians on the basis of Iran’s government. The government is not representing Iran. They are aliens who’ve captured power. There is a sort of monster in this country. Because they come from Iran, the monster could be family. We have to find a way to tame it, to enlighten it. We have to show them how much of a monster they are and how much of an alien they are.

What is the responsibility of the writer in a situation like that?

I don’t believe in any inherent commitment or responsibility for a writer. The only responsibility is to write well. Unfortunately circumstances force responsibility on you and you can’t ignore it. For instance, in 1994, I was one of 134 writers who signed a declaration against censorship. If we were living in a free country, there would be no need to write a sort of political statement against the regime.

I have to write an artistic story, not a political story. But when you are living and writing in a tyrannical regime, everything you write, even a love story, can be political. If you write beautifully you shoot a bullet to the heart of the monster.

What sort of dangers did you face because you took a stance against censorship?

After that statement, 23 of us were invited to Armenia by the Armenian Association of Writers. As stupid writers we accepted and took a bus to Armenia. At 5 a.m., the bus driver tried to drive into a deep valley and jump out. Luckily the bus stopped at the edge. He wanted to kill us like lambs. After—I couldn’t believe it—they arrested us. Then the police came to see if the assassination was successful and found us on the side of the road. We spent the night in jail, then the secret police told us to go home.

You have published in Iran. Are you willing to make compromises so your work can get around the censors?

I don’t agree with censorship, but I have to publish. It’s my personal war. Writing is my gun; I have to use it. If the censors force me to change the word “breast” to because it arouses, and it doesn’t affect the rest of the story, I will do it. If the censor asked me to change a group of sentences that would ruin the story, I prefer not to publish it. I publish a lot outside of Iran right now.


Censoring an Iranian Love Story dramatizes that dance with the censors as the fictional narrator struggles to write a love story without subversive words. What made you want to approach the subject of censorship in a novel?

I was tired of talking about censorship, so I got the idea to write the story and censor it to show how you can write in a way that the censor won’t understand but the reader will. I wrote 15 pages and read it at a conference at Brown University. I realized American audiences didn’t understand it, but they were touched by it. That gave me energy to turn it into a novel.

The novel has a very unique form with changing typography and sections that are crossed out. Do you consider it a postmodern novel?

All the stories have been told. The brave writer doesn’t find a new story, but a new way of telling an old story. If he can, he will make a masterpiece. We have to find a new way of narrating. The story will tell him how to do the job, not the aesthetic school. I love postmodern stories, but I don’t want to be buried in the grave of a label.

If you can find a fresh narrator, then the story goes easily. You find something that wasn’t in your mind before. You find something that is greater than you. When a writer starts writing a story, he is like an egg. He feels weak against the story, against the art, against creativity. He feels very weak, but, if the story works, sentence by sentence, he can feel he is creating. The best pleasure in this world is the moment you finish a story and you feel that it is a masterpiece. You say, “Ah, I’ve made it.”

In Censoring an Iranian Love Story, the censors are no match for the imagination. When they take out a word, your protagonist imagines something much dirtier than what was originally there.

Even if you cross words out, you can still write the sexiest stories in the world. Particularly in a country like Iran where people are familiar with censorship, I can censor the word “the hand” and make ellipses, and the reader will think of many, many different things. It is the power of literature and the power of the word. Words have souls and many voices.

AUTHOR
Elizabeth Hoover is the associate editor of Sampsonia Way. She earned her MFA in Creative Writing from Indiana University, where she received a Project on African Expressive Traditions grant and the Won-Joon Yon Scholarship for Racial Tolerance. She has written for American Heritage, Life, and Poets and Writers. Her criticism has appeared in the Los Angeles Times, the Philadelphia Inquirer, and the Pittsburgh Post-Gazette. She has published poetry in The Adirondack Review, Hayden’s Ferry Review,
and the Atlanta Review. Recently, New Letters nominated her for a Pushcart Prize.