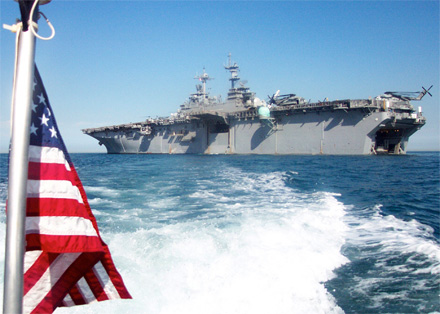 In a move that threatens to exacerbate tensions in a region already pushed to the brink, the US Navy recently circulated an official directive to its personnel to refer to the Persian Gulf by the propaganda term “Arabian Gulf.” The directive, appearing in the US Navy Style Guide, flies in the face of 2,500 years of acceptance of the term “Persian Gulf,” and is viewed by many as means to divide the Middle East along ethnic fault lines. The Navy’s controversial move reopens old wounds and engenders enmity that puts US service members in the region in danger.

“Arabian Gulf” is a phrase rooted not in history or geography but instead in the political machinations of British colonialists in the first half of the 20th century. The term was , a British adviser to Bahrain. His proposal to officially use the term was rejected by the British Colonial and Foreign offices. Two decades later, the term was resurrected by the Anglo-Iranian Oil Company during its dispute with Mohammad Mossadegh, the Iranian Prime Minister whose battle with British oil interests would culminate in a US-sponsored coup d’état that continues to haunt US-Iran relations.

The term gained notoriety in the 1960s during the Pan-Arabism era as part of an effort exploit ethnic divisions to unite Arabs against non-Arabs–namely Iranians and Israelis. It was later used by Saddam Hussein to justify his territorial ambitions in the Middle East and, most recently, adopted by Osama Bin Laden as a means to rally Arab populations by emphasizing ethnic rivalries in the region.

Now, in an environment of heightening tensions between Israel, the Arab states, and Iran–particularly in the midst of increasing rumors of military confrontation fueled in part by the recent Wikileaks cables–the Navy’s needless provocation has reportedly raised the ire of the other branches of the military. The other services should understandably be frustrated that the Navy would risk increasing regional tensions that increase potential risks for US servicemembers in the region.

The Navy’s move has also prompted a swift response from members Iranian-American community who understand that regional stability is not aided by such provocations. Iranian Americans have sent over 3,000 letters to Secretary of Defense Robert Gates organized through a National Iranian American Council action alert calling for the correct name to be used. Protests also appeared en masse on Facebook, generating coverage by CNN and bringing the Navy’s fan page to a virtual standstill. The page’s administrators posted multiple messages to attempt to address the issue.

Similar provocations were when one of its top officials referred to “Arabian Gulf” during prepared statements regarding the recent Saudi arms deal. While the State Department has thus far failed to issue a clarification on this point, its own Board of Geographic Names has held since 1917 that “Persian Gulf” is the correct term, and it is understood that this continues to be the official US Government position.

A response posted by the Navy explains that the branch uses the controversial term because it is the “naming convention recognized by our regional Arab partner nations.” But this explanation is cause for even further concern. The US Navy is effectively providing legitimacy to a propaganda term designed to fuel ethnic tensions in the Middle East by blindly repeating it.

Just as the US should not accede to any call for military action that would endanger American interests and put our troops in harm’s way, the Navy should not acquiesce to dangerous naming conventions that help escalate tensions that could ultimately help drag the US into war.

In the interest of promoting stability in the Middle East rather than exacerbating tensions, the US Navy should put its foot down and assert that it will not needlessly stoke tensions and heighten the risks in the region by other states’ propaganda. No superpower should find itself consigned to advancing a foreign country’s political messaging that could very well put its own servicemembers in danger.