The life of Sohrab (part two) 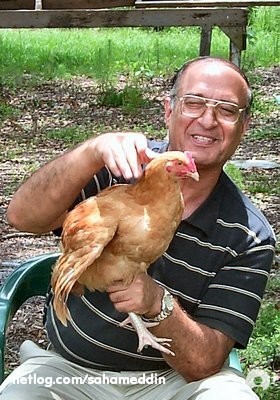 The life of Sohrab (Part two)

I saw Shahin again four years later. They came to our house to see us; she had a girl who was about three years old. Now she was even more beautiful. She was now a married lady with a daughter. But in reality she was a girl not even twenty years old. Now it seemed that she want to be again with the people in the same age of her or younger.  Her husband was still working in Abadan and she came here to Shimiran, because Abadan was very hot at that time. It was end of spring. (In that time there were no
AC or cooler system in normal houses in Tehran, and as I told before even refrigerator or washing machine was not really introduce to the normal Iranian people. The time of this story happened should be 1948 or so) she dressed very nicely and her daughter was also in very beautiful dress. I was in the ninth grade of high school, and about fourteen years old. She invited me to a dancing party and asked me if I can dance? I was tall, but six years younger than her. She was a married woman and I was only a boy who started to like girls. And she was my beloved cousin.  My father was now very sick, he had a sort of cancer and he got every day worse. He was not even fifty years old, but he looked now like an old man. The cancer destroyed his body and also took his patience and hope.  He cried in the time he was alone, because he knew soon he will be worse and may be die.  He had two boys and both of us were under eighteen. He did not work for a long time, he worked may be twenty two years as a high school teacher and now it was three years that he could not go to school to teach. Even walking was a problem for him.  Most of the time he was lying on his bed and it was very boring for him to stay the whole day at home and be in the bed. But he got every day weaker and soon he should go to the hospital, because we all should go to school and nobody could stay at home to be with him. And he needs really a better situation a good nurse or so.

We all helped the mother to take care of the father. But it was difficult for us not going to school and stay at home and takes care of the father. Shahin said, she will take care of him for some days, so my mother and we could rest a little bit.  Her father also my uncle tried also to be closer to us and he tried to play a role of my father. He was also a teacher and he was very nice to me. I loved him just like my father and he was few years younger as my father so he could understand me better.  He and his wife were Baha’i, but my father was a Moslem and my mother was not an active Baha’i, my uncle speaks sometimes about Baha’i with her, but she does not show any interest.  She was more Sophie and believes more in mystic and literature and humanity than religion. One time she told my uncle that Babb and Bahaullah are just huge philosopher and not prophet. They are like Melawi and Hafez or Leon Nicolawich Alexanddrowich Tolstoy, she said they wrote powerful books and they could think very rational, but if they have a connection with super nature or   the believing of God; it is not clear for me. With other words, my mother could not accept them as a prophet, but as philosopher or great people.

Sometimes I could not understand them, both of them were academic and both of them finished the university with good score and both of them had MA degree, why one of them was so religious and the other one was more scientists and my father was Moslem.  The wife of my uncle was also an academic personality, but she was Baha’i.  Sometimes I thought if the truth is one, why these four people around me all with university degrees have three different ideas.  My father was Moslem, my mother was humanitarians and believed in science and humanity or moral, and my uncle and his wife were active Baha’i. For me as a boy with fourteen- fifteen  , and be in the nine grade of high school all of them said right and at least I could agree with all of them.  My father told me, that Imam Hussein and Ali were huge personality and they fight for humanity and just. They even are killed for fighting against unjust. In the time he speaks about Imam Hussein, he cried very bitterly and his face was wet of his crying. His eyes were red and he was very upset to speak about Imam. Now he was so sick and still prayed to God and tried to sit and pray , even sitting was difficult for him to do the praying, so in the middle of his pray, he was forced to lay down on the bed and continued his praying in a lying position. Even I saw him that could not speak properly and he continued his praying by his eyes.  If there is a god why he should be so punished? Why such a religious man like my father should be so sick that he cannot even pray to his God?  I remembered that he influence me so deep that I pray in the night that we have exam so long and so deep instead of learning my lesson properly. So next day the whole pray did not help me and I could not pass the exam, because instead of learning I prayed too much.  Later I thought that pray has no function if you did not learn properly. So I study and learned more and prayed less.  The result was much better.

My uncle told my mother the Bahaullah is a prophet of God, because he had so many nice and powerful books. And if somebody said I am a doctor, we should see how he can handle his knowledge with the patients and if he can help the patients, than he is a doctor and a good doctor. But my mother told her brother that many great philosophers did say the same thinks and their books and knowledge is the same as Bahaullah.  Any way after a few days that Shahin helped my father, his condition got worse and we should take him to the hospital and few days after that, one day that all of us were there. He looked at us and died in vain.  My mother cried and told us, the poor man is now free from so much pain and difficulties. And told me Sohrab do not be sad, if somebody is so sick like he was and dies every day, it is a great gift for him to die for ever, because dying every day is much more painful.   Somehow I was agree with her, because I saw that he was so sad and so weak, that he needs people so badly for sitting or lying. He could not even move in his bed. All his muscles have gone and he had only skin and bones. Now Shahin and her sister and her parents were very nice to us, because we had a very hard situation. They come often to us and try to replace the empty place of my father.  In the time that my father was sick and stayed at home, I was not so comfortable to go out for party with Shahin. But now I need more social life to forget the lost of my father.

Shahin saw that I am so sad, because of the death of my father, tries to be nicer to me as normal. She tried to come more to us and be our company.  My uncle also did the same. She took now me to the party that there was more fun also dancing. And one day she said Sohrab you should dance with me. My brother had his own friends and generally he did not come with us.  She told me that I should put my hand around her and we start to dance. She was very patient and tried to teach me Walls and Blue Danu.  She wanted now to continue her study and asked me if we can also learn together.  She could help me in English and I should help her in maths and biology.  Her husband wanted her back to Abadan and after about one year and few months; she went back to her husband. One day that we were in the bus, she told me. To be married is not so good, too. May be she married more or less for the wedding party or for rings and jewels her husband gave her or for a curiosity, or she wanted to have a real dull  or baby.  But now she sees that all of these are boring and she wished to be a high school girl again.  Or be a student at university like her mother.  She did not like to go to Abadan and stay there alone with the husband and child. Here in Tehran she had a lot of friends and family. Over there, she was almost always alone and should wait for her husband to come back from the work. She even told me if the divorce was not bad, she would be divorce her husband. She wants to be a student again.

I think after three more years she came back to Tehran and again alone with the girl. I finished my high school and was trying to go to pass the entry exam of the university. She told me that she can help me in English and I can teach her the rest of the materials. She wanted to take exam and get her high school diploma.  But she said the work at home does not let her to study properly.  I could only be accepted in the language faculty and my mother and my uncle told me, to be teacher like them is not good, I should try to be a medical doctor.   But with my relative weak knowledge how can I pass the entry exam for medical faculty?  After a consultation my uncle and my mother agreed that I go to Europe to study medicine. My brother was good in math and he was student in the technical faculty.