I am an Iranian-American. I am a hypocrite! 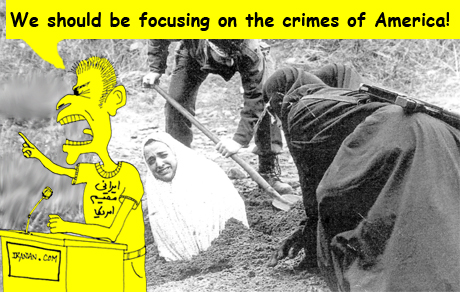 Who am I? I am Iranian-American! I am a hypocrite. I am a wonderful person. Get to know me:

I am an Iranian-American, but not an American. I live in the United States, enjoy all she has to offer, and in the end contribute very little to her. Basically, I dont give a shit about Americans or their country, as long as business is good and things are rosy for me.

I eat from both toobreh and akhor. I make trips back to Iran once in while, give off some poz in front of the others there when I tell them I’m from Orange County or wherver the fuck it is that I live in the states. Yeah, Im successful. Eat that. I have a beezeeness there. I even intentionally Americanize my Farsi accent when talking Farsi to other Iranians in Iran, so that people will know I’m coming from America.

Do as I say, not as I do! In Iran, when young folks ask me of how to come and live in America, I reply “deevooneh haa! why do you want to come to America? You dont know! Life is shitty there! I work like a dog there! They are racist! I had to drive a taxi there! Stay here, and ghadr-e vatan ro bedooneed!”, but then I’m usually the first to breathe a sigh of relief when the GPS map shows my Airbus exiting Iranian airspace. “Thank God, Im safe” I mutter to myself, while checking out the KLM stewardess’ ass down the aisle. Ah, back to freedom again.

I’m sophisticated. When the flight attendant asks, “please be seated until full stop at the gate”, I still get up while in the taxiway to get my stuff before everybody else does! (kosss-e khaaharesh, who does she think she is telling me to sit down? I have rights!). When I get up to leave the airplane, I leave behind 7-8 empty bottles of Heineken, and all the trash I could generate, all over the place. I paid for this $1400 ticket! So I have a right to shit all over the place. Besides, I must remind the flight attendants that they have a job to do (to clean up my shit), instead of giving me orders what to do!

I am educated. I go to college here in the states, become educated, become a doctor or mohandes, then make money. You guessed right: I’m smart. But I wonder why is it that Iranian-American lawyers are such a rare species. And why is it that the jews have such strong lobbies everywhere. Filthy jews! My mother said they were najes!

I hate racists! I hate jews too! And Israel! I tazaahor that I dont. But I really do. I’ve been brainwashed after 30 years of watching IRIB and hearing that jews love money, have big noses, and are evil, that I now actually believe Israel and the jews are out to kill me and my kind. I’m Aryan! And Nazis were cool btw! They had these cool uniforms, and Reza Shah loved them!

I love all ethnicities and people! But I hate afghanis. Theyre all over the place in Tehran! Theyre dangerous! But not as much as the Lors. The Torks are OK though, because Torks are Khar. And the Arabs? Who said Arabs exist in Iran? That’s an Israeli lie! They want our oil! But anyway, I cry rivers of tears for those Palestinians! The UN even said it: Zionism is racism! Those filthy jewish capitalists! Even Peter Griffin said it: “Jews are gross because they rhyme with eeww!”

I constantly remind everyone how stupid Americans are! Oh yeah, I looooove coming on Iranian.com and facebook and posting links (like this one) showing how stupid Americans are! But if Ahmadinejad says Britain is located west of Africa, it shows how smart we are! Because anything he says, people will clap and say takbeer, and buy. See that’s intellignce right there. That’s why I love to go and eat dinner with him in NY, each time he visits and embarrasses Americans at the UN! Awwww yeah!

I’m a political pundit! And I tell you Obama is an idiot! I love to tell everyone how Obama is unfit and unqualified as a president. Dumbass! But deep down in my heart, Im praying that Oh God Oh God he stays, and doesnt let Palin and Rove and Cheney’s people take over again! Please! Not the Republicans again!

I love to hate America. Didnt they shoot down that Flight 655 Airliner in 1988 over the Persian Gulf? May they rot in hell! Never mind that in the same year, 30000 people were executed in Iran, by Iranians. That never happened. Or if it did, it’s not important, because the world hates America! America is the problem! They hate us Iranians. And if I’m living in America, it’s only because I deserve it. No, wait, they actually deserve me. havent you heard? Iranians are the most educated minority living in America!

I hate America’s politics. And I’m not going to do anything to contribute either. That’s why I seldom, if rarely at all take part in civic responsibilities. No, wait, I actually do! I vote once every 4 years in the elections on Nov 4th! See? I’m involved! I give my precious few minutes for this country every 4 years! Seriously, Kennedy was a dumbass to say “Ask not what your country can do for you – ask what you can do for your country”. Of course they have to serve us! We bring culture to this country! We are a 7000 year old race! Their country is only 200 years old! Therefore, I dont have to get involved in anything, but they have to respect us! I resent the fact that we have no lobbies or influence or respect in Congress. After all, we own Los Angeles a.k.a. Tehrangeles!

I am a US citizen. I swore my allegiance to the flag of the United States when I became a citizen. But I hate the US Navy, Army, Marines, Air Force! And I hate their foreign policy, and their stupid flag! Invading and bombing and killing everyone! Never mind that the Talib and and Saddam dont exist any more. That was God’s will. And why do they keep putting sanctions on Iran? They have to be friends with the mullahs! Hey Hillary! Stop hating us, and make friends with the mullahs! Open diplomatic relations! Kiss up! Apologize! I want to open an export-import business in Iran that makes use of my connections here in California. Those damn Human Rights activists! All they want to do is complain complain complain and distract us from having normal relations! All while America is the greatest sponsor of terrorism of all! But dont forget, I’m a proud US citizen! (only, I dont beleive shit in any of her institutions. I’m basically proud of living in CA and being successful.) My name is even American. They call me Gabriel. (It used to be Gol-Agha when I was naturalized). Oh, OK, I’m really an Iranian citizen, holding a US passport. Happy now? But that actually shows how zerang we are! hee hee.

Terrorists should not have nuclear weapons. But for Iran, it’s OK, because it’s their right. And if Jannati one morning wakes up and decides to declare nuking Israel or Europe or the US as halal, well, I’ll just move to Canada to be safe. I have 3 cousins there, and I can speak French too. Plus, I have a degree from USC. I’m smart. They need us.

Americans are dumb people. I went to college here. They were all stupid. Couldnt even handle Algebra. Look at Silicon Valley. Full of Persians and Indians and Chinese. And whoever says America is supposed to have foreigners because it’s a nation of immigrants, is a zionist. And did I tell you, the reason why Americans have twice as many Nobel Prizes as other countries is because the Nobel committee is made up of Jews. And the Apollo Moon landing never happened. Here, check out the proof. Honestly, what do the Americans have? What have they contributed to civilization? McDonalds? Guns? They dont even have a miracle for the third millenium!

And finally, my favorite of them all, “The legend of Persian penis is not a myth, it is a fact, I promise you this“.

So there you have it.