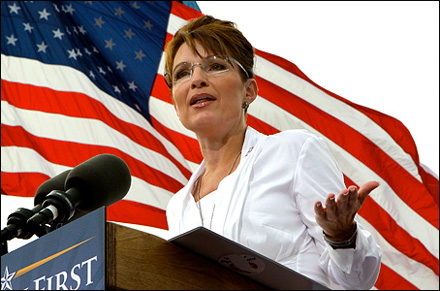 Sarah Palin — former governor of Alaska and Senator John McCain’s running mate in the 2008 U.S. presidential election — published an op-ed in USA Today, that takes the most fanciful neoconservative myths about the Islamic Republic and turns them into a tortured argument for “truly ‘crippling’ sanctions”, U.S. support for regime change in Tehran, and military strikes against Iranian nuclear targets.

Given the disastrous consequences of neoconservative foreign policy ideas regarding Iraq and other Middle Eastern issues in recent years, those ideas and the people who framed them should have been discredited and should now be marginalized — meaning, not taken seriously — in future policy debates. But that is clearly not the case. The neoconservatives and their particular approach to American foreign policy in the Middle East are back in force, and the current focus of their advocacy and activism is pushing the United States into a military confrontation with Iran.

It is even more striking that many “progressives”, “liberal internationalists” (we like John Mearshimer’s description, “liberal imperialist”, better), and “human rights advocates” — who would recoil at the suggestion they were conservatives of any sort, neo- or otherwise — are buying into and helping to legitimate bad neoconservative ideas about the Islamic Republic. By doing so, these left-of-center forces are bolstering the neoconservatives’ drive to war, whether they intend this or not. We saw this happen in the run-up to the 2003 invasion of Iraq, too.

Interestingly, one of the few pockets of politically engaged people in the United States who are prepared to raise serious questions about the wisdom of another ill-conceived U.S. military adventure in the Middle East is found within the “Tea Party” movement, of which Sarah Palin is a leading light. Notwithstanding Palin’s acceptance of the neoconservative narratives that have come to dominate foreign policy discussions within the Republican Party in recent years, the Tea Party is, in fact, deeply divided on foreign policy. Some of the movement’s other leading lights — including at least a couple who will be sworn in as United States Senators in a few days, like Rand Paul (R-KY) — are stalwart in their criticism of the Iraq war and their determination that the United States not launch another “war of choice” in the Middle East that will end up doing even greater damage to America’s interests and international standing.

It seems a daunting challenge for truly principled conservatives to take on what has become the entrenched consensus on foreign policy in GOP circles. But to the extent some of the Tea Partiers are inclined to try, we wish them well. It would be one of the great ironies of recent American history if the most outspoken congressional opponents of potential moves by the Obama Administration toward military confrontation with Iran turned out to be serious conservatives who actually care about the U.S. Constitution.

First published in www.HuffingtonPost.com. A version of this post will also appear on www.RaceForIran.com.

AUTHORS
Flynt and Hillary Mann Leverett, Director of the Iran Project at the New America Foundation.