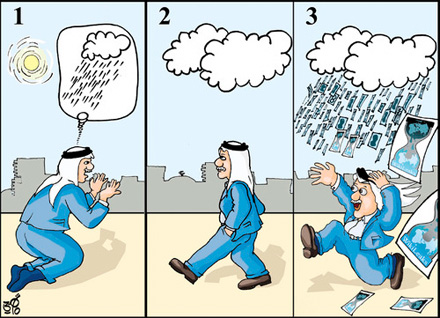 Recent WikiLeaks revelations about the discrepancy between the public and private views on Iran voiced by Gulf Arab leaders have been widely covered by the pan-Arab media without provoking policy shifts or internal tensions in Gulf Arab states. U.S. officials should therefore be encouraged in their policy of pressing for a robust regional coalition to curb Iran’s ambitions.

Since the WikiLeaks story broke in late November, various Gulf Arab official spokesmen have generally refused to confirm their privately hostile comments about Iran — but have not disavowed them, either. The story has not been censored by the Arab media, as some Western analysts have alleged, although it is correct to say that the semiofficial press in most countries has covered it sparsely. But there is widespread access to the internet, pan-Arab newspapers, and satellite television channels, which have provided ample coverage and commentary. Most Arab media outlets (except the semiofficial Syrian papers and the pro-Hizballah elements in the Lebanese press) also accept the veracity of WikiLeaks — unlike the Iranian media, which seems to be on the defensive, claiming to view the leaked cables as part of some nefarious plot.

Official Responses
Of the six Gulf Cooperation Council (GCC) states — Qatar, Oman, Saudi Arabia, Kuwait, Bahrain, and the United Arab Emirates (UAE) — the latter four have offered official public comment on the WikiLeaks affair, along the following lines: avoiding direct remarks about the diplomatic cables; “reiterating” support for diplomacy and dialogue to resolve the Iranian nuclear dispute; and acknowledging Iran’s right to peaceful nuclear energy while implicitly (or even explicitly) rejecting its pursuit of weapons-grade nuclear fuel. One Saudi spokesman voiced lack of interest in the leaks, despite his country’s widely reported display of overt hostility to Iran throughout the confidential cables. “These documents,” he declared, “do not concern the Kingdom of Saudi Arabia…. The Kingdom’s policies and positions have always been clear.” A Saudi spokesman later commented that King Abdullah had never asked the United States to bomb Iran.

A spokesman for Bahrain insisted a bit more expansively that it has always supported the pursuit of nuclear energy for peaceful purposes, along with a Middle East free of weapons of mass destruction. Bahrain’s foreign minister, Sheikh Ahmed al-Khalifa, in a press conference with Secretary of State Hillary Clinton, refused to comment on the leaked documents, on the grounds that they are “the property of the United States Government, and they have been leaked in a way that is considered illegal.” Sheikh Ahmed did state that although Bahrain’s policy is to support the right to nuclear power for peaceful use, “taking that power, to developing it into a cycle for weapon grade [sic], that is something that we can never accept, and we can never live with in the region.” This comment, however, has not been monitored in the Arabic-language media.

Similarly, UAE minister of state Anwar Gargash stated that the leaked cables represent “the Americans’ point of view and that some of the comments have been taken out of context.” At a recent security conference in Manama, UAE foreign minister Sheikh Abdullah bin Zayed al-Nahyan proposed that “any solution with Iran should come from the region, and the GCC countries should have a role in these negotiations.” Sheikh Abdullah later stressed that Iran has a right to peaceful nuclear energy but needs to come clean to the international community on its nuclear program. Kuwaiti leader Sheikh Sabah al-Ahmed al-Sabah told the conference that dialogue was the best way to arrive at a peaceful solution to the nuclear standoff.

Oman seems to have maintained its usual discreet silence, although one leaked cable makes it clear that Sultan Qaboos bin Said is very aware of both Iran’s propensity to subvert and America’s crucial role in maintaining Gulf security.

The response of Qatar, which has better relations with Iran than most other countries, is apparent through its ownership of al-Jazeera, the satellite television network broadcasting in both Arabic and English, with associated websites. It has managed the WikiLeaks story, either in order to downplay its posturing vis-a-vis Iran or to embarrass its rivals and the United States. It has done so, to judge from a content analysis of its websites, simply by selectively focusing more on some aspects of the story than on others.

Wide Arab Satellite Television Coverage, with Divergent Slants
Al-Jazeera has featured at least seventy-six articles and editorials on WikiLeaks on its Arabic website from November 25 to December 9, and even provides a WikiLeaks portal on its home page. Roughly 20 percent of al-Jazeera’s reporting on the subject has focused on American difficulties with WikiLeaks, and another 40 percent has been about WikiLeaks itself and its founder’s legal problems. Less covered, by comparison, is the Arab dimension — and much of that seems calculated to needle other Arab leaders by noting their calls for strikes against Iran, ties to Israel, and cooperation with the United States.

Significantly, al-Jazeera did not report on the leaked cable suggesting that Qatar might permit an American attack against Iran from its soil in exchange for security agreements. There has been no mention of Qatari prime minister Sheikh Hamad bin Jassim al-Thani characterizing his relationship with Iranians as “they lie to us, and we lie to them,” nor of his “throwing cold water” on Iranian attempts at expanding ties with Qatar. Al-Jazeera did report, though, on one cable in which an Israeli official criticized the channel for its sympathy toward Iran.

The other widely watched pan-Arab channel is al-Arabiya, headquartered in Dubai and created by Saudi Arabia to be a direct competitor to al-Jazeera. Al-Arabiya had considerably fewer articles and editorials related to WikiLeaks on its Arabic website from November 25 to December 9. Even so, the total of forty-nine such items — averaging more than three each day — was substantial. Al-Arabiya’s coverage was also spread somewhat differently, with approximately 30 percent dedicated to American difficulties and 20 percent dedicated to WikiLeaks and its founder.

In one unusual incident, al-Arabiya reported that Qatar secretly backed a U.S. attack against Iran in exchange for the exclusive right to develop a gas field shared by the two countries — an account that goes beyond what was actually in the leaked documents. Al-Arabiya also reported that Saudi Arabia and Bahrain have asked the United States to take a firm stance against Iran — language significantly softened from the Saudi king’s alleged advice to “cut off the head of the snake.” And on December 13, Al-Arabiya, unlike al-Jazeera, featured a story about Iranian opposition leader Mir Hossein Mousavi’s online accusation that WikiLeaks exposes the faults of Iranian president Mahmoud Ahmadinezhad’s leadership.

Treatment by Pan-Arab Newspapers
Although most of the mainstream or semiofficial Arab national dailies have given WikiLeaks very little coverage, the large-circulation pan-Arab papers based in London, all with elaborate online versions, have filled this gap. For example, the Saudi-funded al-Sharq al-Awsat, one of the most widely read, posted at least 104 articles and editorials on its website related to WikiLeaks from November 25 to December 9. American difficulties with WikiLeaks were featured in 27 percent of its articles on the matter, followed by general musings on media and diplomacy at 19 percent.

Near the opposite political pole of the influential London-based dailies is al-Quds al-Arabi, with a radical and often pro-Hamas line. This paper, too, has frequently reported and editorialized about WikiLeaks, but with an entirely different slant. The tone is well captured in a December 9 column by its chief editor: “Some [Arab leaders] talked about the formation of Arab forces to strike Hizballah, while other demanded the severance of the head of the Iranian snake…. However, we did not see one document — so far at least — showing official Arab anger (especially among the moderate states) toward the American or the Israeli viewpoint.” In giving WikiLeaks credibility and citing such specifics, this paper differs from its counterparts in either Syria or Lebanon, or in Iran. They have all tended to dismiss these cables as deliberate American or Israeli lies and provocations — without reprinting any of the particulars about Arab-Iranian or other regional tensions.

Internet Interest
In addition to the extensive coverage in the pan-Arab press and satellite television channels, internet traffic related to WikiLeaks is quite high in many key Arab countries, both in Arabic and especially in English. For example, as of December 9, Saudi Arabian Google searches for “WikiLeaks” in Arabic had doubled in one week, and Saudi searches for “WikiLeaks” in English grew by 500 percent in the previous month, making it the second most popular such item in that longer timeframe. In the UAE, these searches have soared so much in the past month that Google does not even provide a number expressing a relative increase.

Conclusion
Whatever the legal future is for WikiLeaks and its founder, Julian Assange, further leaks seem inevitable. The affair represents an embarrassment to the confidentiality of American diplomatic relationships and a communications security disaster. But as far as the Gulf Arabs are concerned, it is also an opportunity for U.S. policy to reinforce their opposition to Iran — an opportunity that Washington needs to pursue with urgency.

AUTHOR
David Pollock is a senior fellow at The Washington Institute, specializing in Middle Eastern and broader Muslim public opinion, media analysis, and related issues. He would like to thank research assistant Andrew Engel for his valuable contribution to this article.