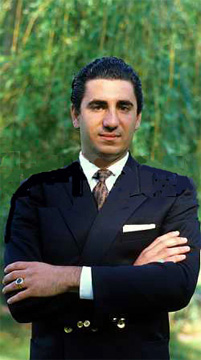 The suicide of the shah’s son is the latest tragedy for a dynasty drenched in blood. Stephen Kinzer on the death of a prince. Plus, more on Prince Alireza Pahlavi’s life.

Down the street from my apartment in Boston’s South End, a single gunshot shattered the pre-dawn darkness Tuesday. Police arrived to find a suicide. This doesn’t happen any more often in the South End than anywhere else, and passers-by like me were left to imagine what tragedy lay behind it. Then came news of the man’s identity. He was Prince Alireza Pahlavi, son of the late shah of Iran.

This shocking act of self-slaughter was the latest violent tragedy in the long history of a family drenched in blood—first that of the Iranians it tortured and killed, then its own. It is a drama of Shakespearean dimensions. The shah once ruled Iran with an iron fist, but his family later paid dearly for his sins, echoing Hamlet’s judgment that royal crime “cannot come to good.”

Prince Alireza’s father died in humiliating exile barely a year after being chased from his homeland in one of the 20th century’s most spectacular revolutions. His aunt, Princess Ashraf, the shah’s twin sister, a once-sinister figure known as Iran’s “black panther,” has suffered through depressions and addictions, three failed marriages, and the assassination of one of her sons. His sister, Leila, was found dead in a London hotel room in 2001 after taking an overdose of barbiturates.

“Like millions of young Iranians, he too was deeply disturbed by all the ills fallen upon his beloved homeland, as well as carrying the burden of losing a father and a sister in his young life,” the Pahlavi family said in a brief statement on Tuesday. “Although he struggled for years to overcome his sorrow, he finally succumbed.”

Iran has also succumbed over the course of a cruel century, in large part because of the depredations of the Pahlavi dynasty. Yet this was a dynasty that set out to modernize and strengthen a nation that was prostrate and on the brink of extinction when it seized power. Prince Alireza’s tragedy mirrored that of his long-suffering land.

The founder of the dynasty, Reza Shah, Prince Alireza’s grandfather, was a titanic figure, a brutal tyrant but also a visionary reformer. He was an illiterate soldier who came to power in a coup and made himself shah in 1926. The main reason he refused to lead his country toward democracy was that he wished his son to be shah after he was gone.

That came to pass with Mohammad Reza Shah’s ascension in 1941, but the son turned out to be a cowardly wimp, completely unlike his commanding father. He hated the democracy that emerged in Iran after World War II—personified by its most formidable leader, Prime Minister Mohammad Mossadegh—but could do nothing to crush it. Then, like a gift from God, the CIA and British MI-6 arrived to overthrow Mossadegh in 1953, angered by his attempt to nationalize Iran’s oil industry. That allowed Mohammad Reza Shah to take absolute power.

The Pahlavi dynasty was one of the few facts of 20th-century geopolitical life that nearly everyone considered permanent and unalterable. Its collapse in 1979 stunned the world no less than the collapse of the Soviet Union a decade later.

Prince Alireza spent his childhood in royal luxury. He was the second son of an absolute monarch who held the fate of 30 million people in his hands, became America’s chief ally in the Middle East, and lost himself in such deep megalomania that he came to consider himself one of the greatest kings of all time, rightful successor to Persian titans like Cyrus, Darius and Xerxes.