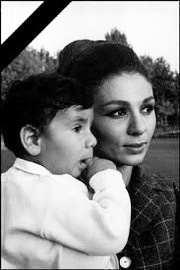 Muhammad Sahimi, who writes for TehranBureau.com told : “Iranians are concerned about Iran. But, almost none commit suicide because of it.”

He was referring to the claim that Alireza Pahlavi’s suicide may have resulted, in the words of his older brother Reza, from the fact that Pahlavi was “deeply disturbed by all the ills fallen upon his beloved homeland”.

Mr Sahimi described this as “just a sheer political attempt to gain sympathy and perhaps support of Iranians inside Iran.”

One wonders whether he had seen Reza Pahlavi’s press conference in Boston where, while paying tribute to his “harmless” brother, the former crown prince nearly broke down in tears.

It’s a tad cynical to suggest that the poor man was scheming a PR coup while mourning the second of his siblings to “succumb” to the “illness” that is suicidal depression – in 2001 his 31-year-old sister Leila was found dead in London following an overdose.

If anything, Reza is to be commended for having the gumption to admit that such an ‘illness’ exists in his family – in doing so he has broken a taboo.

Ever concerned with presenting an immaculate façade, many Iranians associate depression with “divanegi” — madness.

We like to think it’s others who suffer it, not us.

But, as Pahlavi says, the condition is by no means limited to his family – or for that matter to Iranians.

One of Alireza’s friends told VOA Persian that his condition was part of a ‘collective’ depression. It’s possible.

Ahmadinejad representing Iran on the international stage, the aftermath of 2009’s fraudulent elections, headlines about a woman who might be stoned — such things can trigger depression.

Mr Sahimi’s suggestion that suicides in Iran are not affected by political and social conditions is curious — for they are in every other country.

Reza Pahlavi has every right to parallel his family’s suffering with that of Iranians at home and abroad.

Far from being the Imperial Family they once were, today’s Pahlavis are clearly as human and vulnerable as the rest of us – it would take a hard-hearted soul not to feel for Farah Pahlavi at this time.

Of course, Mr Sahimi is not alone in downplaying the significance of Alireza’s death.

On Facebook one woman posted in response to claims that the Pahlavis are experiencing a surge in popularity: “not one single person on my facebook who lives in Iran commented on Alireza’s death. These people range from 30 to 48 and no one mentioned anything. Almost all are against regime. One of them had even noted positively about recent mid term elections in the US but no single post from Iran on death of Alireza.”

That probably says more about the fears of Facebook-users in the Islamic Republic than anything else.

In any case, this is surely a time to stand in solidarity with Reza, the former queen Farah, and the Pahlavi family as they struggle to overcome unimaginable sorrow.