How to be Iranian 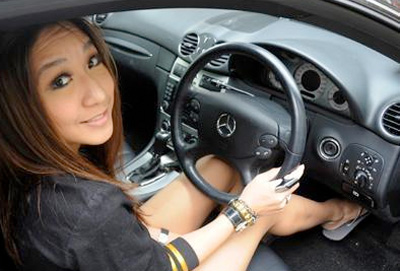 For 11th grade English class creative writing assignment: Iranians, or Persians, as we often like to be called, are complicated people. Achieving the status of being Iranian is not an easy task, but with much dedication and a strong liver, it can be done. Also, let me say now that there are basically only two types of Iranians, the first generation, and the second generation, since there were no Iranians in this country prior to 1979 (citation needed). These two generations are very different in nature, and it seems that the second generation is determined to undo the good name the first generation has created for itself. While there are many exceptions, to make it easier, you can basically think of the first generation as the “good” generation and the second, as the “bad” one. Note: the following rules and observations are purely comedic in nature but are not exaggerated at all.

Get a Mercedes or BMW: Iranians drive German cars. That’s it. It’s seen as a symbol of status, but these cars are most often driven by Iranian women who can’t actually drive them. Nevertheless, to be fully integrated into Iranian-American society, a German car is essential.

2nd Generation rules: Iranian girls receive either a BMW or Mercedes SUV, or a Range Rover as an 18th birthday present from their daddies. This is especially prevalent with California Iranians, who are another species altogether.

Have the alcohol tolerance of an elephant: Iranian men, while not blatantly obvious about it, look at alcohol tolerance as a symbol of manliness, as do men in many other cultures. The difference, though, is that even after 8 glasses of premium whiskey and several bottles of French wine, Iranians still don’t get drunk (Note, this is not true for 2nd gen. Iranians, who get drunk at least 4 times a week.) While many think that Iran is a dry country, this is actually not true. While alcohol is illegal in Iran, it’s still the third most important food group after kabob and khoresht. Iran has often been called the “Ireland of the Middle East”, while Iranians themselves tend to be worse than the Irish, the Germans, and the Polish all put together.

Learn to tarof: Absolutely 100% essential. While you may find the occasional Iranian who drives a Japanese car and doesn’t drink, you will NEVER find one who doesn’t tarof. Tarof is a Persian word which has no direct translation into English. It basically means putting your guest before yourself. A reasonable concept, but Iranians do it in their own way. Here are a couple common occurrences of tarof among Iranians:

•    After dinner, the guests argue about who “gets” to do the dishes. A guest must always run up to the sink and at least put the gloves on, but it is the host’s job to push them away and yell at them to sit down and have some tea. TAROF

•    At a restaurant, at the end of the meal, each man must pull out his wallet and try to pay the check. While this is common in American society, as well, Iranians are different in that they have no problem yelling at each other for 30+ minutes in the middle of a crowded restaurant to decide who gets to pay. In the end, the one who has had the most to drink emerges victorious and gets to pay for the bill inevitably full of filet-mingon and premium wine. TAROF

Learn to appreciate Iranian classical music: While many Iranians themselves don’t actually enjoy classical Persian music, when there is an elder around, it is basic etiquette to close one’s eyes and sway one’s head to the sound of a man holding a note for several minutes. This makes it appear as though one is in deep thought and even if you can’t actually appreciate this music, learn to fake through it. (Note, 2nd gen. doesn’t have to do this. Typical 2nd gen. Persian music is Lil Wayne, Wiz Khalifa, Kid Cudi, etc.)

Learn to love doogh: Doogh, in my opinion, is Iran’s worst culinary contribution to society. However, when I am around other Iranians, I’ll chug it down like it’s the elixir of life. Doogh is a milky white soda, and it tastes about as bad as it sounds. It is made from plain, unflavored yogurt (you know, the sour kind), and carbonated water. To enhance the doogh-drinking experience, various spices are added that have absolutely no business being in a beverage, like salt, pepper, and a mélange of others I can’t identify.

Wear the best brands:  For men, this includes mainly Giorgio Armani and Hugo Boss. Lacoste, Michael Kors, and Hilfiger are also acceptable. For women, this includes mainly D&G, Versace, Burberry, Anthropologie, Chanel, and Dior. Bvlgari jewelry for women is a must, as is a Rolex for men. Sunglasses may only be Oakley, Gucci, Dior, or Armani. These rules are non-negotiable and are very serious. (Note: this is not true for 2nd gen. Iranians. A typical wardrobe for a 2nd gen. Iranian male is roughly 80% Puma, 10% Adidas, 5% Nike, and 5% Lacoste. For a 2nd gen. Iranian female, it consists mainly of Uggs and designer jeans.)

Lose your voice during soccer games: Iranians, especially men, cannot keep quiet while watching a soccer game. While this is common in all cultures, Iranians will go so far as to insult the coach’s mother, insult a player’s mother, or physically attack the television screen. Remotes are best kept out of reach, lest they get embedded into the drywall after Esteghlal Tehran (or Manchester United for 2nd gen. Iranians) loses. An important note: During World Cups, it is essential to root for either Brazil or Germany if Iran is not playing. Iranian Brazil supporters will spit at the sight of the Argentine team and often call Maradona “Ahmadinejad’s best friend” (a HUGE insult for Iranians). Iranian Germany fans are much less common, but still exist mainly as a result of the mass Iranian immigration to Germany in the 80’s.

So, in conclusion, being Iranian isn’t easy. It’s a lot of hard work that can possibly even lead to cirrhosis, but somebody’s got to do it. For all you Persian wannabes out there, my only advice to you is to follow these seven basic rules of being Iranian and to educate yourselves about Iranian politics, the one thing I forgot to talk about. In the end, all your effort may pay off, and you may emerge as a “born-again Persian”. Good luck in all your endeavors, and remember, once you go Persian, there is no other version. Khodahafez!