The King and Us 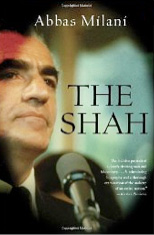 Publishers Weekly on The Shah a biography by Abbas Milani: Over the course of almost 40 years, Mohammad Reza Shah was a colossus in Iran, the one constant in a swirl of changing loyalties, political fortunes, and pressures both domestic and international; by the end of his reign, virtually no state decision could be taken, save by him. But as this biography reveals, this accumulation of authority was more a function of the Shah’s lifelong distrust of all around him than it was any indication of skill in governing, or of genuine control. Milani paints a richly detailed picture of a complex man plagued by demons and paranoia (much of it well-founded), at once insecure and megalomaniacal. Yet the thicket of biographical detail can leaves the reader longing for more analysis.

Why a biography of the Shah now? There have been at least a dozen books on his life. Most have been “commissioned,” written to lionize or demonize him. Even those that were dedicated to finding and reporting the truths of his life were stymied by the fact that much remained hidden in still-classified documents, mired in adulating or acrimonious whispers, or marred by conspiracy theories concocted by his friends and his foes, or by himself.

He was one of the pivotal figures of the second half of the twentieth century, and certainly one of the most tragic. The passion and pathos of his thirty-seven-year tenure on the Peacock Throne first turned Iran into one of the fastest-industrializing authoritarian countries in the world, comparable to Taiwan, South Korea, and Turkey. But the pathologies of his rule ultimately begot a revolution that turned the country into a center of Islamic radicalism.

The Cold War began in Iran when the Shah was but a novice king, and his fall more than three decades later heralded the beginning of its end. The failure to predict his fall must be considered one of the great intelligence failures of the twentieth century. The aftershocks of his fall in 1979 continue to be felt not just in Iran but in the Middle East and the rest of the world. Understanding his life, and mapping out the contours of his fall, are possible only now, when thousands of pages of hitherto classified documents in British, American, and Iranian archives have been made public.

In fact, a new look at the Shah’s life, free from the excesses of his overzealous defenders and detractors, is now not only possible but more than ever necessary.

The revolution that overthrew him in 1979 was democratic in its nature and demands. Sadly, it begot a regime more despotic than the Shah’s own modernizing authoritarianism. The continuous tumult in Iranian politics over the last three decades is rooted in the fact that the democratic dreams and aspirations of that revolution were aborted and remain unrealized. Understanding the forces that overthrew the Shah, then, helps us understand the dynamics of Iran’s current democratic movement. Like all histories, this one is as much about the future as it is about the past.

Some of the Shah’s supporters today praise his demeanor in the heady days of revolutionary upheaval as consistent with his stoic devotion to nonviolence and his respect for human life; he could have easily retained his power, they argue, had he been willing to shed blood and use the full force of his mighty military. The Shah championed this argument himself when, in his last book, Answer to History, he wrote, “A sovereign may not save his throne by shedding his countryman’s blood.”10 But this was, at best, only one of the many reasons for his stoic behavior. With the onset of the crisis, the Shah lost his resolve. The man who only months earlier had taunted the West as lazy and dismissed democracy as only befitting the blue- eyed world; the King who had previously stood up to pressures from U.S. presidents—including Richard Nixon, with whom he had a particularly close relationship—to reduce the price of oil was suddenly unable to make any decisions without prior consultation with the British and American ambassadors. Adding to the Shah’s distress was the fact that these ambassadors had made it clear that their governments would not support a military crackdown against the opposition.

Some of the Shah’s supporters conceded that, in his last months of rule, he suffered from inaction, even vacillation, but they attribute it all to the debilitating side effects of the drugs he had been taking for his lymphoma. They conveniently overlook a long history that underscored, long before the beginning of the new wave of protests, the Shah’s inability to withstand pressure and his storied indecisiveness in times of crisis. For the Shah, character was destiny, and many of his weaknesses as a leader were his virtues as a human being. In 1978 the cancer that ate away at his body and the side effects of the drugs he took to battle it only reinforced behavior patterns that were in fact rooted more in his personality than in any of his physician’s prescriptions.

The Shah is available at major bookstores and Amazon.com.