Gearing up for change in Iran 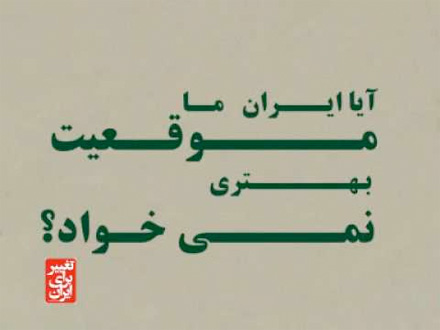 One word alone can explain why, in 1979, Iranians from all walks of life took to the streets of Tehran and other major Iranian cities to take part in what later became known as the Islamic Revolution: Freedom, that is to say, freedom from the chains of an autocratic regime that had, for so long, undermined their attempts at democratization at both the political and economic levels.

Thirty-two years have now passed since that dramatic event, and it is quite clear that Iranians, both at home and abroad, are very much divided as to the worth of the 1979 revolution.

While a large segment of the Iranian population has, as a result of the Islamic Republic’s utter disrespect for human rights and gross mismanagement of the Iranian economy and politics, reached the conclusion that the revolution was a big mistake, many others have refused to judge the past through the prism of the present, consequently advocating a deeper, more dialectical understanding of what took place in 1979.

Whatever views exist, though, as to the usefulness of the 1979 revolution, one thing is for certain: discontented Iranians the world over are actively seeking ways of promoting fundamental change in Iran through efforts of often a grassroots nature, including, perhaps, the possibility of yet another revolution [1].

Of course, the existence of this sort of attitude on the part of the majority of Iranians inside Iran has instilled much fear in the hearts and minds of the ruling elite in Iran, a clear indication of which is the Intelligence Ministry’s often paranoid behavior towards activists, former politicians, ethnic and religious minorities, and civil society organizations (e.g., trade unions), which has so far led to many politically motivated executions and incarcerations.

But the rulers in Iran have only themselves to blame for the emergence of such an attitude among so many ordinary Iranians, simply because they have refused, to this very day, to acknowledge the fact that the country’s governing institutions, similar to its natural resources, are the sole property of its people and, therefore, are not to be exploited for personal or factional gains.

Were they to acknowledge, and thus act upon, this fact in a manner conducive to real national unity, they would find discontented Iranians quite forgiving, and Iran would surely be able to recover from its weak position on the world stage in a matter of only a few short years.

Judging from their past behavior, however, they will not be so rational as to do this; therefore, requiring the opposition to renew its commitment to the struggle for a democratic Iran in ways that are bolder than before.

So far, individual acts of resistance have done a good job of keeping the spirit of the democratic movement alive throughout the country.

However, these individual acts of courage lack wider national recognition and thus cannot be expected to automatically or on their own lead to any sort of collective action that would be capable of either bringing down the regime or forcing its hardliners to sit around a negotiating table and hammer out the terms of peace and a lasting national reconciliation.

For collective action to occur, the leaders of the opposition must become more proactive in mobilizing the masses.

And, if it is a less violent transition to democracy that they are after, then they should perhaps consider making their moves while Supreme Leader Ali Khamenei is still alive, for fear that his replacement might be more hostile to the reform movement than he has ever been [2].

Finally, let us hope that the 32nd anniversary of the Iranian revolution can somehow serve as a platform from which to launch a viable democracy in Iran.

AUTHOR
Jalal Alavi is a sociologist and political commentator specializing in issues related to Iran.

NOTES
1. Former President Mohammad Khatami is also of the opinion these days that Iran might be moving in this direction. See here.

2. Ample evidence suggests that many of the hardliners in Iran are unhappy with Khamenei’s hitherto lax attitude toward the leaders of the Green Movement and are thus anxiously awaiting his departure.