Learn from our mistakes 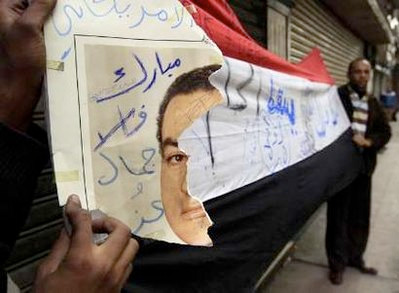 The world is watching the heroic uprising of the brave Egyptian people, and their just demand for political freedom, government accountability and a better living standard.

Over 32 years ago, Iranian people did the same against the oppressive regime of the then Shah of Iran, for the same reasons.

My dear Egyptian brothers and sisters,

When we look back in our own lives, sometimes there are situations we wish we handled differently, had we KNOWN more, or had we been wiser. Life of a nation is no different. So I am writing to you, to share our experience, in the hope, the people of Egypt can do better than people of Iran, in dealing with their dictator, and build a better Egypt.

32 years ago, as the emotions of our nation was focused on the immediate removal of the Shah, our mind was not looking forward as to what to replace that old bankrupt system with? Today, not only are Iranian people no closer to a more accountable government nor better living standards, our social freedom along with our political freedom has been taken away from us as well.

Today in Iran, we don’t have basic political freedom to assemble, as the Islamic Regime of Iran, does not allow freedom of assembly. Today, the Islamic Regime of Iran, does not even allow a candidate that passed its filtering process, and according to their own statistics received over 13 million votes, to hold a simple rally. How much freedom do you think an Iranian have today? Today, we do not have political parties. Even political factions are not tolerated within the Islamic regime.

My dear Egyptian brothers and sisters,

In spite of Iran’s vast natural resources, many in Iran live in poverty and those who ask for accountability, are persecuted. So to flee Iran, appears to be the main option. As a result, some of the best and brightest talents of Iran, lives outside Iran, contributing to the host country who sheltered them instead of their own!

Not only books, films, newspapers are routinely censored for not having the same view as the Islamic Regime, their authors are often imprisoned and in many cases even murdered for such attempts.

Under Islamic Regime of Iran today, we do not have freedom of speech, access to unfiltered internet, nor even can we watch news other than what they want us to see on satellite TV in the privacy of our home! For the past 32 years, the Iranian people have faced the threat of a Islamic Regime guard raiding their homes, for the crime of watching something other than appears on their TV’s.

— Don’t bring religion to government. We Iranian people unfortunately did, and the results are far worse than what we had. Fortunately, you do not have a powerful character like Khomanee who said one thing, before reaching power, and the opposite after. But still, avoid those who provide their strict religious belief as the solution, for complex problems that faces us today. Our problems today, require collective cooperation and rational thinking, and the freedom to do so. Do not let political-Islam to make you envy even these dark days of Mobark, 30 years later!

–Don’t just focus on removal of that brutal, ignorant dictator Mobark, but also focus on visionary Egyptions that are NOT power hungry, focused on solving the issues, and are not hateful in their speeches.

–When the tyrant Mobarak finally agrees to step down, don’t try to destroy your government and start from zero. That would only take you back another 30 years like it has done so for Iran. Every system, has bad but also very good individual that serves it.

–Don’t execute or torture anyone, even those who tortured you or executed your loved ones. That’s the only way to insure, execution and torture will be eradicated.

–Destruction of headquarters of Mobarks party is valid reaction to his despotic rule, but do not destroy banks, theaters. Those all belong to Egypt not Mobark.

–When you are rewriting you constitution, do not trust closed door sessions. Read every page of the documents and understand their ramifications. It is better to take the time to come up with a great document, than to hurry this process and have to redo it again in 30 years!

–Here’s one we should have chanted from day 1 and we did not, Iran for all Iranian. Say, Egypt for all Egyptians! Moslem or Christian, northerner or southerners. Be aware of anyone who tries to do otherwise.

The whole world is watching and we hope you set a better example than our revolution did. We hope we can learn from you. A powerful, democratic Egypt is good for the region. Egypt is now in a unique position to be great both for her own people but also a good example for the region.

PrevPreviousMr. Khamenei, Is the Arab Revolution Also Being Organized by the American and the British?
Next“CANADA, RAISE YOUR VOICE LOUDER FOR SAEED MALEKPOUR!”Next