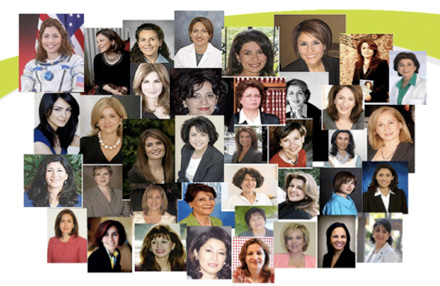 When I signed up to attend the recent women’s meeting in Irvine, California, titled Pathways to Success, I thought it best to keep my expectations low. I knew the conference was coordinated by Coastline Community College and Coastline Foundation, whose executive director happens to be an Iranian-American, Ms. Maryam Khosravani. As a member of PAAIA, I also knew that this organization had cosponsored the event. But it was the impressive list of speakers that lured me.

I wasn’t sure what to expect from such a meeting. Being a first attempt at something new, no doubt there would be a need for some improvement. However, grateful to be invited to introduce my new novel, and being only a day long and an hour away, the least I could do would be some networking.

The lobby of Hyatt Hotel in Irvine welcomed me with friendly young volunteers, who presented my nametag and an information package neatly designed to resemble a ladies’ purse. I thought that a nice touch for a ladies’ meeting. Around the lobby, there were the usual booths to promote different businesses: skin doctors, consultants, jewelers and even a raffle table. So far, nothing seemed unusual.

Even though I knew the impressive list of speakers on the program, the Iranian pessimist in me doubted if half of them would show up.  I have attended enough events to know about those infamous last minute cancellations and anyway, the list seemed too good to be true. A friend had laughed and told me before, “Ya, right! Like Anousheh Ansari has nothing better to do than to come to Irvine and be part of a panel of four!” We’d see about that. In any case, interesting as her story may be, Ms. Ansari was only a part of a panel.

My first surprise came from the timely manner in which they started each event. By the end of the day, I could adjust my watch to the sound of that chime! No sooner had the soft bells echoed than ladies – and a few gentlemen – shuffled into the three conference halls to enjoy the discussions which began within minutes, and this we had to do or the doors would be closed. The same friend who had doubted speakers’ attendance, had also told me that due to limited advertisement, fewer than expected had registered. Now with more than five hundred present, the three conference rooms ended up with standing room only.

Throughout the day, I listened to proficient women, whose accomplishments made me even more proud of being an Iranian. On-site videos showed us some of these ladies, who had put the benefit of others way above their own. From the little Iranian girl, who received medical treatment in US to the natives in Amazon forests in need of rescue, these ladies offered help around the globe. What astounded me was the fact that they all spoke flawless English and even Firoozeh Dumas spoke – and laughed – without an accent!

Over the years, I had heard much about the success of Iranian-American men, but knew only few stories regarding women. The panel discussions proved to be one more impressive than the other. It came to a point where choice lost its meaning and I knew that no matter which conference room I entered, I would be in for a treat.

No doubt, the organizers and volunteers will receive their share of criticism, because we are so good at finding fault in everything. But having attended other Iranian meetings, where food and tea seem to be the focal point and discussions often end in argument and hurt, I was deeply touched by the smooth conduct at this conference and learned much from it.

At the conclusion, as an upbeat music brought all the participants to the stage, the line-up of so many accomplished ladies brought tears to my eyes and I was swollen with pride. The day had turned into a surrealistic experience that I found not only moving, but also empowering.

Will they do this again next year? I certainly hope so. But considering the successful outcome, they’re going to need a convention center!

AUTHOR
Zohreh Ghahremani is the author of Sky of Red Poppies, available now on Amazon & most bookstores. www.zoeghahremani.com