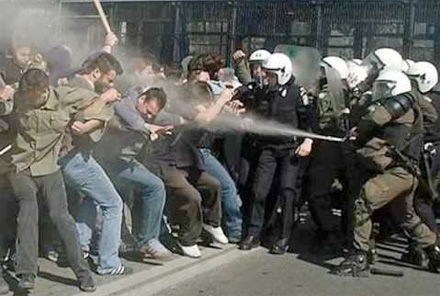 I believe every single person posting their opinions in this and other similar sites, wants democracy for Iran. None of us unless not in the right state of mind would ever prefer dictatorship over democracy. However to achieve any goal there is a right way and a wrong way and this is where our paths part.

In my humble opinion the path to democracy is a long slow process and not an overnight revolutionary shortcut.

NONE and I mean NONE, of the major revolutions in the world have ever led directly to democracy by itself. As a few good examples I can mention, Iran, Cuba, Russia and China, all of which lead to dictatorships and tyranny by the likes of Khomeini, Mao, Castro and Stalin that made the people of those countries so miserable that overtime they developed a nostalgic longing for the previous dictator. Even in case of the French, after the revolution the country ended up in the hands of one Napoleon Bonaparte and we all know about how democratic he was. If we could bring ourselves to have a logical look at all these scenarios, we can then see that this could only be natural outcome.

You see, this is in the nature of revolutions. They are illogical impulsive and almost always born out of frustration and that is the recipe for disaster. You see, to have a democratic system one first needs to understand what a democracy is and more importantly understand his/her responsibly toward society and how to behave in a democratic manner.

This is why even in case of France revolution it did not end in democracy until the French people started to behave in a democratic manner and went through that slow painstaking process of evolution. On the other hand in the UK there was no revolution in that sense, but the people and the establishment felt the need to change and went through the same processes and got the same result or may be even a better one, by keeping their heritage intact. Although these are two different types of democracy, they are democratic in nature and that is how it should be. Democracy is not one size fits all. Every democracy has to be a refraction of the cultures and people of that society.

The path to democracy is a long process of evolution and not an overnight revolution. It is very easy to create scapegoats and blame all the problems on one individual or even one party. But the bottom line is that in no society will democracy be achievable unless by every member of that society starting to act responsibly and respecting each others point of view. Otherwise we could be in the long hall of going through the same vicious cycle of replacing one dictator with another.

Even today, although I absolutely HATE the Islamic Republic and everything it stands for, especially its leader, I am not sure if another revolution is the answer. Not because I think the IRI is up to the job but because I believe that we as a nation are not yet ready for democracy.

Now! I know this statement makes a lot of people furious but to make you see my logic I set you with a humble test.

As far as I know democracy means freedom of opposition and YES that means sometimes people whom you do not like and might have been fighting with all your life might be voted into office.

So think about this! What if tomorrow in a free and fair election the people of Iran decided to bring back the constitutional monarchy and make Reza Pahlavi the new ceremonial king? Just like the UK and Norway. What if they decided to have a democratic republic select him or Mousavi or Rajavi, or even the leader of communist party, as their president? What if they even decided to keep and reform the Islamic Republic by reforming the constitution and just punishing those who committed crimes against people? Then what? Will you still respect the will of the masses and let democracy follow its course? Now, you do not need to answer me just be honest to yourself.

I can confidently claim that there are still many little dictators amongst us who can not even stand those who think differently. Dictators who can not even bear the thought of anyone selecting the son of the Shah, the person whom they fought 30 years ago, as their leader. Not because they have any constructive criticism and legitimate questions but because they are still fighting the battle of decades ago.

It is true that the Supreme Leader is a brutal dictator with no respect for human rights or even life. But remember that it is not him in the prisons who tortures, rapes and kills his own countrymen. It is not him in the streets who beats and shoots the very people he took an oath to protect. But it is the other Iranians who through their own free will and just because they can not bear any voice of opposition questioning their beliefs or challenging their interests and authority, are committing those heinous crimes in his name.

No matter how much we hate Khamenei or the Shah or Khomeini, the crimes of their police and secret services can not be entirely be blamed on them. This is simply because those who carried out these crimes, did it on their own free will and for whatever reason chose to do it.

This is the very same principle held in the trial of Hitler’s concentration camp guards in Nuremberg, where defence lawyers argued that they were just following orders. However the judges did not accept this and stated that every individual is responsible for his own choices and actions.

The same argument was risen when Mao argued that the person who controls the guns controls the power, but and an American philosopher challenged him stating unless one has the consent of those behind the guns, power is only an illusion and this is the hearth of our argument. Personal responsibility and having the courage to say NO to evil.

Only a few days ago the world witnessed how the Egyptian army had the courage to say no to oppression and massacre. They simply realised that the government of Egypt and its army are there to serve the people and not the other way round. Unfortunately however our armed forces have not so far come to that enlightenment.

It is very easy to scapegoat Khamenei or the Shah and get rid of them. Or even bring down the Islamic Republic, just like we did with the monarchy. But until we defeat that little dictator within ourselves and start respecting opposition, noting will fundamentally change. We might be able to change the face of dictatorship but its nature will stay the same

This does not mean we should avoid questioning and scrutanizing the opposition their purpose, plans and vision or even their motivation. But this should only be done is a civilised manner without resorting to insult accusation or ridicule.

shart-e laazem va kafee, or the necessary and adequate conditions. Some conditions although necessary, they are not solely adequate for achieving a goal and this logic applies very much to our argument here. Another revolution and a swift end to the reign of the IRI might be necessary for establishment of democracy in our country but unless each and every one of us start taking our responsibilities seriously and give respect to the opposition, it would never be enough.