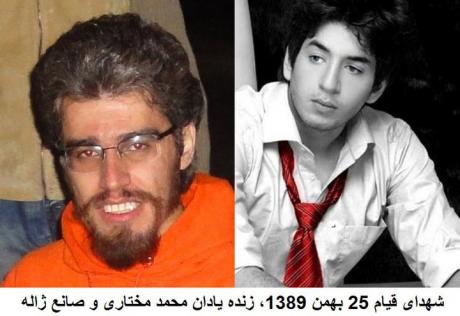 It was not yet February 14th when Mohammad Mokhtari, 22, changed his facebook profile picture. He uploaded the 25 Bahman (February 14th) logo. Mohammad was going to the demonstration. He was tired and unhappy. In his last Facebook status, he wrote: “Oh God, please give me the honour to die on my feet, for I am tried of living seated and degraded”. Sane Jaleh was a fine arts student. He had dreams. He was Kurdish. He wanted to serve his land like Bahman Qobadi [film director]. He also wanted to attend the protests.


Hundreds of thousands of Sane’s and Mohammad’s count down the seconds [to protest]. Hundreds of armed agents also wait. Sane and Mohammad attended to say “no” to dictatorship. The armed agents were there to say “yes” to dictatorship. Mohammad and Sane went to say: “We deserver a better life.” Those carrying arms went to say: “You do not deserve a better life.” Mohammad and Sane had faith that one day they will take back their country from the dictator. The job of the dictator’s allies is to kill faith, to kill the young, to kill hope…

February 14th arrived. The Mohammad’s and Sane’s showed up everywhere. Hundreds of thousands flooded the streets. They screamed. They chanted. They said: “We are tired of dictatorship.” They said that dictator should go. They said: “We want our life and country back. We want our freedom. We want our human rights. We do not want a dictator.”

The forces of repression are everywhere. They are angry that they have, not been able to kill hope, failed to restrain the will [of the people for change], not succeeded in establishing the reign of terror, and been unable to keep the streets empty [of protesters]. The Mohammad’s and Sane’s in Mashhad, Shiraz, Isfahan, and other cities chanted slogans. All their voices became one, which turned into a scream.  Their voice was heard by everyone. It reached the ears of the people of various cities, the nation, and the world. The dictator, however, does not hear this voice.


In another corner of the city, they have imprisoned Mehdi Karroubi and Mir Hossein Mousavi. They have cut their contacts with the outside world.

The allies of the dictator are outraged. The voices bother them. They do not like human beings. They are agitated that they have not been able to kill the wills of humans. They fear the existence and the presence of the people. They only know how to beat people. They hit from the left and the right, using batons, sticks, and chains. They detain hundreds. they have learnt not to like people. They have learnt that the only way is to hit and kill. Screams and slogans stem and boil from the heart of the people. Bullets come out from the guns of the dictators.

Mohammad and Sane are two young men who laid in the street, soaked in blood. The bullets of the dictator took their lives.

They died and their murderers buried their bodies. Their murderers placed the most severe pressures on their families. Those who think like the dictator have put Mousavi and Karroubi under house arrest. They say that Karroubi and Mousavi must be executed. The streets are empty now. Nobody has any news of Karroubi and Mousavi. The dictator is still in power. Sane Jale is no longer with us. Mohammad Mokhtari died on his feet [standnig tall]. God saw his [Facebook] status, but did not hear his scream. The dictator has not heard it yet either…