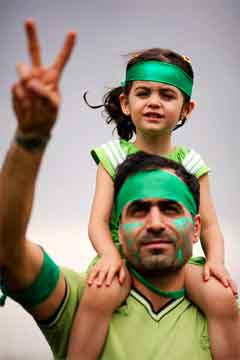 The key thing that many seem to forget or ignore is the way Iran’s legal system and constitution is set up. This is the crucial point for all of us to get through our heads, because as wishful as we all are for various levels of reform to occur, it simply can’t, according to established Iranian Law and it’s strange Constitution.

It is currently a felony crime to suggest that Iran’s constitution be changed. The warrant which can be issued if you keep pushing your luck, is the familiar “Corrupt Upon The Earth” (Mofsed-e-Fel-Arz) and “Anti-Revolutionary” (Zeddeh Enghelab), each of which carries the death penalty at worst, 10-15 years in prison at best.

So this means you cannot suggest any changes to Iran’s Constitution.

As I am sure all of you are now a bit more aware, this is a key basis of the Supreme Leader’s unelected role in Iran’s governance, as well as all of the other Councils which hold various equally unelected powers of state.

So to change Iran from within and consequently peacefully, as we all aspire and hope for, would require the change of the Constitution, which as I hope you all now truly get, is illegal.

Even if Khamenei himself suggested revising the Constitution, he would be breaking the law. And I am sure there are many inside the many councils who would love the chance to hang him for that!

So this reason, and the fact that the leadership in Iran is sitting quite pretty now, reform of Iran’s Constitution isn’t going to happen from within. Ever.

To further secure their security, this second edition of the Constitution, which was revised after Khomeini’s death, has also been declared a “Perfect Document” which also locks the deal tighter than a Seal’s asshole.

What is an even more important subtle detail for all of you to know, understand, and try to digest into your articles, feedback, comments and posts, so that you really understand the current set up, and why street protests can never amount to peaceful reform, is this;

In the second revision, they also removed ALL amendment clauses, rules and regulations. This means that there is no rule, process, procedure for changing the Constitution. So you cannot for example ask the Majles to vote on an amendment that would eliminate the post of Supreme Leader, or require the SL to be elected etc.

Do you understand the impact of this?

I hope so, because as you can see, without tearing up the Constitution, (which would be illegal) even if done via a coup or second revolution, there is absolutely now way to change Iran’s system of governance.

The only other way that Iran can reform from the current radical form of unelected governance that has these corrupt and unaccountable councils full of religious leaders ruling every aspect of government and life, is for these council members to slowly dissolve themselves over time. To make themselves irrelevant.

By the unlikely act of simply not showing up for work, or dying of old age one by one and not being replaced, so that many many many years from now, we end up with Constitutionally required traditional or ceremonial councils of elders, and a ceremonial Supreme Leader who are so old, weak, and out of it, that they really have little or no power anymore, and don’t even want the responsibility.   In mock executive orders that have no real Constitutional basis of power or credibility, they would “sign” over their decision making power to the new crop of “lower level” elected officials in a new ceremonial political tradition.

So when this reform through “attrition” happens one day, after a national election in which a new President was elected, the official (but ceremonial) Supreme Leader would symbolically hand over powers to the newly elected president and true representative of the people, and that would be that.

It would be carried live on TV across the land, and everyone would dress up in their finest, beaming smiles, and applaud and then exchange Sonbols. And then we would all go out for Chelo Kabab.

In the event of a bad President or crisis, the SL could theoretically take powers back according to the Constitution.

Of course another alternative is the escalation fo these protests into a quick civil war, followed by another round of executions of top officials, and then we would all watch and see what the 30 somethings can figure out this time.