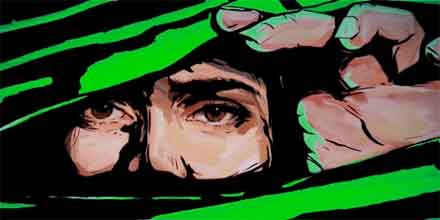 At least tens of thousands of Iranians poured into the streets of Tehran and elsewhere on February 14, breathing new life into the stagnant Green Movement. Though the opposition was never truly quashed following the brutal post-election crackdown, this weeks protests were nonetheless crucial in publicly dispelling the regime’s contention that the movement was, , a senior commander in the Revolutionary Guard, “nothing more than a dead corpse.” So while most agreed that the Greens had only gone underground after last year’s protests tapered off, it was uncertain if the movement could mobilize again, and in significant numbers. On Monday they showed that they could.

The scenes on YouTube were familiar: protesters hurrying away from storming Basiji motorbikes, teargas canisters flying through the air, an isolated member of the government’s militia surrounded by demonstrators — and beaten. Yet there was a subtle but discernible difference between the 25 Bahman protests and those that followed the rigged 2009 election. What started out with a simple demand — “Where is my vote?” — has evolved into something far more confrontational. The chants heard on Monday were indicative of this. “Mubarak! Ben Ali! It’s now the turn of Seyed Ali!” protesters chanted, referring to Ali Khamenei, the Supreme Leader of the regime.

And so despite what the movement’s leaders, Mir-Hossein Mousavi and Mehdi Karoubi, are forced to say publicly, this is no longer a struggle merely aimed at “reforming” the existing system. Those days are over, and both Mousavi and Karoubi likely recognize this in private. Their decision to stage the protests on 25 Bahman — and not repeat last year’s tactic of ‘hijacking’ official rallies, such as the one on 22 Bahman — reflects this point.

Something’s in the air

A year after the last major protests in the country, the Iranian opposition is now directly and unequivocally challenging the very legitimacy of the regime. And while similar sentiments were heard as last year’s protests turned violent, things have changed considerably since then. In the wake of revolutions in Tunisia and Egypt and the several other uprisings that have followed in the Middle East and North Africa, the Iranian people are no longer alone in challenging their authoritarian leaders. Indeed, the entire region appears to be on the cusp of enormous and lasting change. It is a zeitgeist that is captured on the cover of this week’s Economist.

The Islamic Republic finds itself in a precarious position. As protests in Egypt grew, the regime could no longer stay silent on such a seismic shift in its backyard. The official spin — calling it an Egyptian “Islamic awakening” — was of course necessitated by its own crackdown on post-election protests in 2009 and into last year. While such propaganda may serve well with older and more susceptible classes, Iran’s youth knows the power of information and watched Egypt’s youth achieve what they could not: the overthrow of their ruling dictator. The hypocrisy of Khamenei’s praise towards Egypt has surely not been lost on them.

What’s particularly ironic is how recent events are unfolding in a manner strikingly opposite of how Iran’s early revolutionaries envisioned them. Following the Islamic Revolution, the country’s foreign policy was primarily focused on ‘spreading’ the revolution to the Arab and Sunni world — essentially a policy of foreign intervention. Even after Saddam Hussein attacked Iran, leading to a prolonged eight-year war, Ayatollah Khomeini declared that the “road to Qods (Jerusalem) passes through Karbala,” a holy city in southern Iraq. Ultimately the Iran-Iraq war and a series of economic sanctions forced the Islamic Republic to shift its focus inwards to domestic issues, as well as act more rationally on the international stage. Despite its proxies in the Levant, the revolution has not spread.

But now, with the fall of Hosni Mubarak some 32 years later, the regime is claiming that it has. In reality, the it has been the numerous secular and democratic Arab uprisings that have galvanized the Iranian opposition out of hibernation. These are popular movements and there is a palpable solidarity between the protesters of different states, their goals essentially the same. Egyptian protestors were inspired by the success of the Tunisians, who in turn cheered the much larger Arab state on as its people toppled their own dictator. Calls for ‘days of rage’ has been borrowed by Syrian and Yemeni protesters after the tactic proved effective in Egypt. Iran is similarly affected. A statement released by a group of protesters in Tahrir Square called on Egyptians to stand “in solidarity with the Iranian people who suffer injustice, dictatorship and corruption,” while Wael Ghonim, the reluctant heroic face of the Egyptian revolution, sported a green wristband identifying with the Iran’s opposition after he was released from custody. “I would tell Iranians to learn from the Egyptians, as we have learned from you guys, that at the end of the day with the power of people, we can do whatever we want to do,” he said.

And yet this same wave of unrest, while troubling for the Islamic Republic on the domestic front, is greatly benefiting it outside its borders. While the regime is busy suppressing dissent at home, it has begun repositioning itself in the region to reflect recent developments. With Egypt, Hosni Mubarak (who was quoted as saying he had a “visceral hatred” for the Islamic Republic in a diplomatic cable released by Wikileaks) is no longer a thorn in the regime’s side. And while the future Egyptian state will likely continue to respect its existing international treaty obligations, a representative Egypt will undoubtedly be far less cozy with Israel, Iran’s greatest threat.

In Yemen, a loose coalition of opposition forces have been clashing with authorities for weeks. Although the Gulf state is predominantly Sunni, it does have a sizable Shi’aa minority and an insurgent separatist movement headed by the Houthi clain. In 2009, Yemen’s top counter-terrorism official went so far as to say that there was “” that Iran was supporting the separatists. At the very least, even a weakened Yemeni state considerably benefits the Islamic Republic.

And then, of course, there is Bahrain. A small island nation in the Persian Gulf where 70% of the people trace their Shi’aa roots back to Iran, the country is an authoritarian Sunni monarchy whose two emirs (father and then son) have ruled for 50 years. Unlike Egypt, where Coptic Christians and Sunni Muslims stood in solidarity against the government, sectarian fault-lines are likely to play a key role as confrontations with the Bahraini kingdom continue. While the protests have thus far focused on economic and political reforms, Hamad bin Isa Al Khalifa, the King of Bahrain, has been keen to capitalize on his country’s religious pluralism. Police action was necessary to pull Bahrain back from the “brink of a sectarian abyss,” his foreign minister said responding to the country’s violent response to peaceful demonstrators, which has left at least five dead. (It is unclear how the kingdom’s reliance on a security force made up of Sunni foreign nationals does not play on these same tensions.) Were Bahrain to follow Tunisia and Egypt, the emergence of a government more reflective of the country’s Shi’aa majority would undoubtedly be a win for Iran.

The rub for the Islamic Republic remains that any geostrategic gains would come from the same contagion that has seemingly revived the Green movement at home. The White House, who was caught off-guard and criticized by some for its earlier handling of events in Egypt, is trying to stay ahead of the curve this time around, and has noticeably tweaked its Iran policy during the past week. “I find it ironic that you’ve got the Iranian regime pretending to celebrate what happened in Egypt, when in fact they have acted in direct contrast to what happened in Egypt by gunning down and beating people who were trying to express themselves peacefully,” Obama pointedly said following the 25 Bahman protests. The State Department has even started a Farsi Twitter feed.

The shift is a wise move. Since the two countries share no diplomatic relations, the U.S. does not have to walk the same tightrope it faces when its Arab allies (such as Egypt or Bahrain) face down pro-democracy protests. And unlike 2009, when it was uncertain whether or not Obama’s policy of engaging Iran would pay off in nuclear talks, today it is the Islamic Republic that is eager to bargain at the negotiating table. A fourth round of economic sanctions are biting at Iran’s stagnant economy, and the regime’s much-prized nuclear program is in apparent disarray, having been fed damaging sedimented uranium, poorly engineered from the get-go, and sabotaged by the Stuxnet virus. President Obama was also keen to want to not taint the Green movement earlier on, comparing the United States to a “handy political football” for the regime at the time. But despite the White House’s initial hands-off approach to post-election protests, the regime labeled opposition figures as ‘seditionists’ and agents of the West anyway.

Regardless of American policy towards Iran, the stakes have been considerably raised inside the country. The regime has dug in its heels and resorted to violence, as it has since post-election protests broke out. If there is a lesson to be taken away from the fall of Mubarak and Ben Ali, it is that demonstrators are only emboldened by compromise. Brute force, unfortunately, is effective. The Islamic Republic was itself born from a revolution, after all, and the tide only definitively turned in its favor after the Shah addressed the nation, acknowledging their demands. The revolutionaries smelled blood.

But suppression can hold down a people for only so long, as the countless upheavals throughout the region show. If the Iranians are able to mobilize in numbers comparable to 2009, then the regime has reason for concern. Even many of the protesters who braved the streets on Monday were surprised at the large turnout. And despite several heavy clashes with security forces, there was also surprise at the level of restraint by many in uniform. Since the protests, a letter signed by several senior Revolutionary Guard officers and addressed to Guards’ top commander has emerged, demanding that they not be ordered to fire on peaceful demonstrators. If the letter is indeed authentic and the demands of its signatories true, then it would be an enormous development and immediately threaten the regime’s grip on power. With a significantly lessened threat of violence and personal injury, protesters could potentially pour into the streets en masse as they have in other countries, and capture the public space, where revolutions are born. But in light of last year’s crackdown, the opposite outcome is equally possible. In these precipitous times, nothing is certain.