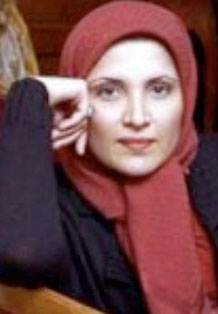 In a cold, concrete cell at Tehran’s Evin prison sits 36-year Hengameh Shahidi, a single mother to one little girl.  The well-respected, award winning journalist and fervent women’s rights advocate was recently sentenced to a 6-year prison term for “conspiring against the Islamic regime.”  In the Islamic Republic of Iran, promoting Women Rights and speaking out against violations at the hands of the reigning Ayatollahs is clearly, a grave crime. Some of Hengameh’s distinguishing work includes acting as the first female Iranian journalist of the Iran-Iraq war, as well as being one of the earliest voices in the campaign against the stoning of women in the Islamic republic.

While studying towards a PhD in Human Rights at the University of London, Hengameh returned to Iran to act as the advisor for women’s issues in then-candidate Mehdi Karroubi’s National-Trust Reformist Party (Etemad-e-Melli) during the June 2009 [S]elections, a candidate who as the head of the 6th  Islamic parliament intervened to halt the proceedings of a bill proposing to reform repressive press laws and ordered the bill to be removed from the docket. dedicated to loosening the laws governing press and media.  Her politically charged arrest on 29 June was an attempt to choke her communication with other similarly minded Iranians, as well as foreign sources.  Her crime led to her solitary confinement in Iran’s most notorious prison.

The Islamic Republic of Iran ranks highest in the world in the imprisonment of journalists. Doubly infuriating, this week the International Campaign for Human Right in Iran released the Regime’s execution statistics since January 1, 2011—within the last three weeks alone, the Ayatollahs have shed the blood of close to 50 of their nationals; on average, one person has been executed every 8 hours since the start of the new year

Today Hengameh lives a grim reality.  Not only is she physically and psychologically tortured, but she also continues to be denied appropriate medical treatment.  Her pre-existing heart disease has since progressed, and she has further developed new ailments and low blood pressure.  Although the prison doctor has repeatedly stated that Hengameh must be cared for at a proper facility beyond the prison walls, he too is continuously ignored, which further begs the question of whether or not his position is simply symbolic.

Furthermore, Hengameh is kept from consistently and thoroughly communicating with her lawyer, and is also allowed only minimal contact with family. Just two weeks ago, she was officially banned from using the prison phone, for no substantive reason. Along with her young daughter, her parents and siblings are kept completely in the dark regarding her health, and her fate.

As an Iranian woman myself, Hengameh’s case is particularly distressing.  Her imprisonment has lead Iranian dissidents like me, to start a campaign demanding her immediate release.  The “Free Hengameh Shahidi Campaign” has gained momentum both inside and outside Iran, as civil society raises its voice against the Regime’s brutality, especially in the treatment of women.

Although I am an unwavering proponent of regime change, while Hengameh is a proponent of regime reform, our political discrepancy makes no difference.  Free Speech is a natural right deserved by all, even those we may disagree with it must be upheld across the globe, and it must transcend the boundaries between differing political persuasions.

Hengameh’s imprisonment and our campaign for her immediate freedom, eerily coincide with the run-up to International Women’s Day.  Celebrated annually on 8 March, women from all corners of the world gather to address women’s issues which transcend political and religious borders—the infringement on Hengameh’s rights is one such issue.

This story is no anomaly– it is one of thousands of Iranian women, like Nasrin Sotoudeh, Mahdieh Golroo, and Nazanin Khosravani, imprisoned yearly for similar “offenses,” or engaging in outlawed “western” behavior.

The oppressive nature of the Islamic Republic controls every aspect of one’s life—from hairstyle to what one may express.  The cultural riches, intellectualism and advancement which characterized the ancient Persian Empire are seemingly void in today’s Iran, occupied by self-interested Ayatollahs. The obvious vacuum, where one easily senses the loss of what was, and perhaps, what grandeur could have been was no natural occurrence—it was the intentional imposition of an Islamic Regime seeking to rid Iran of Western values, liberal perspectives and societal progress.

These ayatollahs don’t spare oppression on any sector of society.  Recently, however, the Regime’s brutality has been increasingly focused on local journalists, seeking to suffocate any attempt at free speech.

The leaders of Islamic Regime claim that obtaining nuclear technology is Islamic Republic of Iran’s indisputable right while they can’t even respect basic human rights, dignity and freedom for people.

Hengameh’s case is the forefront of the battle for freedom of speech in Iran.  Unfortunately, her story has received very little western attention—her American and European colleagues seem fairly complacent, unconcerned about the fact that journalists in Iran are facing the unimaginable.

The reality of Hengameh’s forced silence anoints us each with the conscious responsibility to be her voice for women’s rights and civil liberties, but also to be the voice advocating for her freedom.  The “Free Hengameh Shahidi Campaign” will utilize these next weeks prior to International Women’s Day, demanding Hengameh’s release.  Consider doing what you can, and be her voice for freedom and free speech—join us at HengamehShahidi.org for more information on how to be a voice for regime change in Iran.

AUTHOR
Elham Yaghoubian, is a writer, activist and Co-founder of MPG, Iranian for a Secular Republic organization.