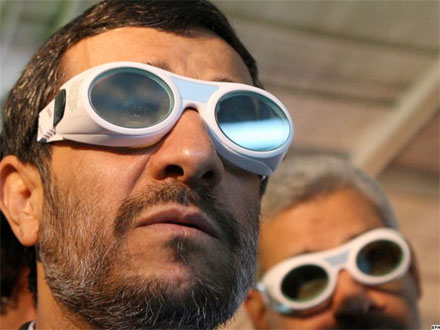 On March 1, the Pentagon announced it was sending the USS Monterey — a vessel equipped with the sophisticated Aegis radar system, capable of protecting Europe from a potential Iranian nuclear missile strike — to the Mediterranean. The guided missile cruiser is the first part of a missile shield announced by the Obama administration in 2009. Its deployment comes one week after the Vienna-based International Atomic Energy Agency (IAEA) released a notably outspoken report on Iran’s nuclear activities and lack of cooperation with inspectors operating under the UN Security Council’s mandate. Issued on February 25, the report appears to agree, at least in part, with the conclusions of a new U.S. National Intelligence Estimate (NIE) on Iran, about which members of Congress and their staff were briefed a week earlier. Together, the reports paint a picture of Iran persisting in its controversial nuclear activities despite international concern, although the U.S. report suggests that sanctions and sabotage have slowed the program.

New NIE
The latest NIE reportedly revises the conclusions of a controversial 2007 NIE on Iran, which argued that the regime had halted its clandestine work on a nuclear weapons program. When the 2007 estimate’s “key judgments” were declassified and released, they offered a starkly different perspective than the message emanating from the Bush White House, which had been emphasizing a growing Iranian threat. Yet public perception of the 2007 NIE largely ignored one of its other key findings: that Iran was continuing to develop uranium enrichment technology. In the absence of a civilian need for such technology, this finding suggested that enriched uranium was being produced for nuclear weapons.

The new NIE remains classified and is only available to a limited readership in government. Yet the U.S. media, quoting sources in Congress, has offered a glimpse of one of the estimate’s main conclusions: although Tehran has yet to make a strategic decision on whether to build a nuclear weapon, it is developing the unspecified components of a bomb, itself a complicated engineering challenge.

Tougher IAEA Report?
The quarterly IAEA reports are intended to record the agency’s progress in persuading Tehran to convince the world that its nuclear activities are for peaceful purposes. This is a diplomatic obligation for Iran as a signatory of the Nuclear Nonproliferation Treaty. In addition, mandatory provisions of several UN Security Council resolutions oblige Tehran to cooperate with IAEA inspectors. Progress has been slow at best, but under the leadership of director-general Yukiya Amano, who took over from Mohamed ElBaradei in late 2009, the quarterly reports have indicated a tougher IAEA approach to Iran.

The February 25 report noted the following:

* Contrary to Security Council resolutions, Iran has not suspended its uranium enrichment activities at several facilities, which are under IAEA safeguards. Indeed, enrichment activities have been expanded at both a pilot plant and the main plant at Natanz, and at an enrichment plant called Fordow, near the holy city of Qom. Tehran admitted the existence of the latter facility in 2009, days before it was revealed by U.S. and European surveillance. Indeed, Iran is enriching with more than 5,000 centrifuges, 1,000 more than three months ago. (A rare optimistic note is that Iran’s total of 8,000 centrifuges is slightly less than the total at the time of the last report, suggesting breakdowns remain a problem.)

* Iran has now produced more than 3,600 kilograms of low-enriched uranium; if processed into higher proportions of the fissile isotope U-235, this amount could theoretically be enough for several atomic bombs. In addition, Iran continues to enrich some of this to a higher (20 percent) proportion of U-235, a cause for concern because anything beyond is defined as highly enriched uranium (HEU). Iran is also working on two new centrifuge designs that might be more efficient than its problematic IR-1 centrifuge.

* Iran is not responding to information requests about the Fordow plant and has yet to tell the IAEA anything about ten new centrifuge plants. Sites for five of these plants have already been chosen, and construction will begin on one of them before the Iranian new year (March 20) or shortly afterward.

* Iran has provided no further information regarding its claim last year that it possessed laser enrichment technology, nor on its later announcement that it was developing a new type of centrifuge. The regime has also ignored IAEA requests about additional locations related to the manufacture of centrifuges and research and development on enrichment.

* Although Iran has stated that it is not working on reprocessing — which the IAEA confirmed, but only in the facilities it was permitted to inspect –the regime continues to work on heavy-water projects in violation of Security Council resolutions.

* Under a section titled “Possible Military Dimensions,” the IAEA report refers to “new information recently received “as well as concerns “about the possible existence in Iran…of activities related to the development of a nuclear payload for a missile.” This disturbing conclusion reinforces previous evidence that Iran is working hard to design a nuclear weapon small enough to fit on top of a missile less than three feet in diameter. It also suggests that Iran intends to design an implosion-type device, which is more challenging than the gun-type design used in the Hiroshima bomb and later developed by apartheid-era South Africa. Nuclear devices for missiles must also be more durable than those dropped from aircraft because they need to cope with the huge acceleration and high reentry temperatures associated with rocket launches.

(The IAEA report also notes that Iran has had to delay the start-up of the Russian-designed Bushehr civil nuclear power reactor because of unspecified problems requiring the unloading of the uranium fuel rods. The New York Times subsequently reported a problem with the reactor’s cooling pumps. Although Bushehr is not an immediate proliferation concern, its personnel need many of the same skills required for the controversial portions of Iran’s nuclear program.)

Tehran’s Nuclear Intentions
Iran’s nuclear progress has been extraordinarily slow. Using technology similar to Iran’s, Pakistan needed eight years to reach the testing stage in the 1970s and 1980s.Iran is believed to have been working on nuclear weapons since the mid-1980s, or roughly twenty-five years. Some of the delay can be attributed to poor administration, but the technical challenges and the disruption of needed imports of material and equipment have also contributed to the slowness. The reported, and perhaps unreported, incidents of sabotage have probably played a role as well.

The United States sees this delay as confirmation that its sanctions policies are working, while also claiming that Tehran has yet to make a “strategic decision” on whether to move from the technical ability stage to actually making a testable device. Yet it is difficult to reach the same optimistic conclusion from reading the IAEA report, and it makes the deployment of USS Monterey seem unnecessary.

Much of the confidence that Iran remains unable to make a nuclear device rests on the knowledge that its IR-1 centrifuge has never been successfully used to make the required 90 percent HEU needed for a deliverable atomic bomb. Iran’s attempts to develop two new centrifuge types, known as IR-4 and IR-2M, could be beyond the regime’s technical skills. Given Tehran’s relations with Pyongyang, however, Iran could obtain access to advanced P-2 centrifuges, which were revealed to be operating in North Korea last year. Pakistan has used this type of centrifuge to develop enough HEU for as many as a hundred atomic bombs.

Tehran is still refusing to engage in any meaningful dialogue with either the IAEA or the international community — the January talks in Istanbul between Iran and the P5+1 (United States, Russia, China, Britain, France, and Germany) failed to make any progress. Meanwhile its nuclear decisionmaking is likely being affected by the popular demonstrations sweeping the Arab world, which it probably sees as distracting Washington and weakening the U.S. position in the region. The resultant higher oil prices will certainly compensate Iran for the effect of trade sanctions. Both the IAEA report and the new NIE should serve as reminders not to become complacent about the threat of a nuclear Iran.

AUTHOR
Simon Henderson is the Baker fellow and director of the Gulf and Energy Policy Program at The Washington Institute.