Reza Joon, man up or get out! 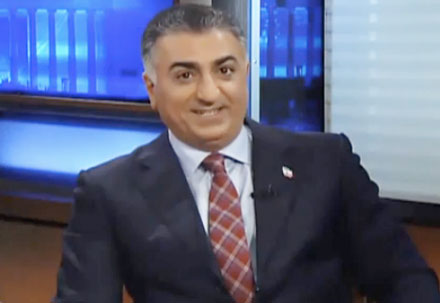 On March 6th at 12am, a BBC reporter slipped into the city of Zawiya under heavy fighting between the Libyan government forces and the rebels. As he wondered the streets, the BBC reporter came across a rebel fighter who was walking about, smoking a cigarette. The reporter stopped the rebel and asked him who and where his leader was. The rebel pointed at the sky and said, “God. He is up there somewhere.”

Just like the Libyan uprising, the Iranian democracy movement is pretty much in the hands of fate. With no cohesive strategy, mixed signals, characters with questionable pasts, infightings and conflicting reports of whereabouts of green movement leaders, the people’s demands for that illusive democracy is again grinding to a halt.

As the green movement’s leadership goes MIA and its organizational structure falters under the weight of IRI pressure and self-inflicted wounds, Reza Pahlavi finds an opening to fill the vacuum. Pahlavi in recent weeks has stepped up his efforts to repaint a new image of himself among Iranians. Pahlavi, who understands the value of good PR, has been making the rounds in Iranian satellite TV circus, answering questions that have been haunting him for the past thirty years. This sudden shift of strategy is helping his image and keeping him in the loop as a possible contender.

RP is taking a page from the US political playbook. His strategy is simple. Wait for the right opportunity to throw jabs. He comes in to political forefront every time the green movement suffers a setback. And during the green movement’s occasional moments of glory, he fades into shadows and waits for the next opportunity. This strategy keeps him around as a relevant player without exposing him to too much risk. RP is betting on the possibility that the green movement will eventually evolve into a secular movement with nationalistic connotation, and if that happens, he will be the VIP guest at the party and most likely at the top of the leadership food chain.

But Reza is committing a serious miscalculation. He does not quite understand the mentality of the very same people his father and especially grandfather ruled for many years. Reza Pahlavi is betting his money on a few westernized, educated Iranians who embrace and understand the structural hierarchy of a sound political system. That strategy is a big failure. Iran is a heavily traditional society. A society that heroism and valor is embedded in its DNA.

The very fiber of Iranian society is made from what Fereydoun Hoveyda called “Rostam Syndrome.” Iran is a country that its core population embraces leaders who display selfless acts of bravery… leaders who are willing to sacrifice everything they have to fight against what they believe are direct attacks on the good of the society. Now, that has not always paid off for our people. We often end up with leaders who hurt us more than they help us. Nevertheless, we are who we are.

Reza Pahlavi’s grandfather is a good example of Iranians’ infatuation with bravery in leadership. Reza Khan was a commander that led from the front. He repeatedly displayed courage under fire as he stored his dominion. He began an all-out assault against tribal bandits who terrorized the Fars province. He personally battled the tribal leaders, killed the bandits and stored order in a region that had never heard of the word: law. He then went to war against mullahs and did something unheard of before him. He intimidated, harassed and hung mullahs from ropes. That was challenging the status quo with courage not words… something that Iranians had not experienced much during the reign of the Qajar Dynasty.

Unlike Reza Khan, his son was not exactly what you call the icon of bravery. He repeatedly fled the country during the times of crisis and hardly ever showed any acts of selfless courage. Khomeini on the other hand, driven by paranoia that crusaders were still at war with Islam, and Israel and the US were on the path of destroying the very fabric of the Islamic values, showed courage by standing against shah and the imaginary forces behind him. Khomeini did not carry much credibility with Iranians at the beginning of the revolution but his status was elevated to Rostam when he intimidated shah to pack and leave.

Reza Pahlavi so far has shown no such courage. He has repeatedly missed opportunities to capture his people’s imagination. He seems to be relying too much on good old lip service (I volunteered to go back to Iran as a pilot to fight against Iraq’s invasion) instead of showing true courage through actions.

Pahlavi strikes me as a person who genuinely believes and respects personal freedoms. He displays a high degree of intelligence and great love for his country. He also seems to be an opportunistic politician who gets his moments in the spotlight as they come. He is not a risk-taker and does not seem to have the killer instinct that his grandfather had. And ultimately, he does not strike me as someone who can satisfy Iranians’ “Rostam Syndrome.” Maybe someday he will prove me wrong… but it’s highly unlikely.

Now, some say that Reza has chosen the path of nonviolence. So did Gandhi and Martin Luther King. But what separates them from Reza and people like him is the simple fact that Gandhi and MLK never hesitated to put their lives, families, fortunes and comfort in jeopardy for their people. Courageous leadership like that inspires people.