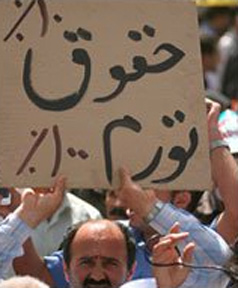 On Feb. 28, Mahmoud Ahmadinejad boldly , “Iran is among the few countries in the world where no one goes to bed hungry.” It’s hardly the first grandiose claim the Iranian president has made about the state of the Iranian economy. He recently announced that unemployment would be eradicated in two years. And the president defiantly insisted last November that Iran’s economy is booming, despite international sanctions.

These sorts of hubristic pronouncements once made Ahmadinejad popular among his base of lower-working-class supporters, who benefited from government handouts. But these days, the president’s exaggerations are running up against economic reality: For the average Iranian, times are tough. The country’s economy is weak, unemployment has skyrocketed to 14.6 percent officially (real numbers are surely higher), and inflation is creeping up as the government cuts subsidies on energy, food, and other consumer goods. So stark is the contrast between the government line and reality that, for the first time, Ahmadinejad’s perpetual optimism is losing — rather than winning — supporters.

The president’s claim about hunger in Iran went down particularly poorly with his base among the lower class. The next day, on March 1, when Ahmadinejad delivered a speech in the industrial city of Khorramabad, whose working-class population once warmly embraced him, he found the mood rather cold. A sign held up above the crowd read, “We the workers of Parsilon [a factory] are hungry.” Another sign in the crowd read, “Swear to God, we’ve come to a breaking point from all the discrimination and injustice.”

Such workers have historically made up a significant portion of Ahmadinejad’s base. Their loyalty cemented with generous government largesse, they mostly stayed on the side of the president after the contested June 2009 election, when thousands of protesters took to the streets to denounce the results. Those discontents called themselves the Green Movement, drawn primarily from the ranks of the middle class, intelligentsia, and students. The underclass, still loyal to the regime and Ahmadinejad, became known as the Blues, to underscore the fact that, to the extent that they had jobs, they were primarily engaged in blue-collar professions.

Although the Greens and Blues were once split by socioeconomic and political lines, the parlous state of the economy is making the line between them less distinct: The Blues are going Green.

How did the president’s base falter? For starters, Ahmadinejad spent more than two years trying to convince the Iranian parliament to let him ease fuel and other subsidies, a move that according to the IMF was supposed to “serve the dual purpose of generating more revenue for the country and curbing the wasteful use of energy.” Ahmadinejad won the political battle to lift the subsidies, but he hasn’t succeeded in controlling the inflation and economic mayhem that have resulted. The government’s attempts to mitigate the inflationary effects of the president’s fiscal and monetary reforms are undermining Iran’s already anemic rate of economic growth, bankrupting firms, and exacerbating employment.

Indeed, according to several recent reports, including one by Djavad Salehi-Isfahani of the Brookings Institution, the Iranian economy is on a precipice. Ahmadinejad’s new subsidies plan, which eliminates heavy discounts on fuel and food, has thus far pushed inflation to an annual rate of 15 percent, which may well rise further. The prices of important consumer and food staples have risen even faster; the price of bread has doubled, and gas prices have quadrupled.

The government is attempting to alleviate the effects of increased prices by providing its citizens with handouts of cash. But by every indication, the economy is still going to get worse, something that could give the opposition increased ammunition. The Economist Intelligence Unit’s Iran report, published in December, predicts that inflation will continue to plague the country for at least the next four years. All these rising costs will begin to fuel a vicious cycle, Salehi-Isfahani fears: Rather than buying locally made goods, Iranians will be more likely to consume imports, spending “their subsidy money on imported goods on which prices do not rise.” To make matters worse, Ahmadinejad’s preferred method for combating inflation is keeping the value of Iran’s exchange rate artificially high and flooding the market with cheap imports, primarily from China. And finally, adding to the general apprehension is a recent Ahmadinejad budget that relies on an inconceivable $13 billion rise in oil exports for 2011.

The youth stand to bear the brunt of this economic downturn. According to estimates by researchers Omid Memarian and Tara Nesvaderani, unemployment among young Iranians already stands at 70 percent. Although at first glance this might appear an exaggerated figure, the estimate is probably not widely off the mark. Independent economists have consistently maintained that the actual rate of unemployment in Iran is probably twice the officially announced figure and that unemployment in the ranks of the youth is double the overall figure. Moreover, it doesn’t appear that Ahmadinejad’s cash handouts will relieve their situation. In fact, the Economist Intelligence Unit predicts that youth unemployment will rise further in the coming year. A recent report by Iranian government researchers shows that about half of Iranians living in urban centers are living below the poverty line. Out of work and living with little means, young lower-class Iranians could quickly grow frustrated with their government’s inability to provide them with decent jobs.

Enter the Green Movement, which understands that its opposition would be significantly stronger if the Blues would come on board. Although currently under house arrest, the Green Movement’s leaders, Mir Hossein Mousavi and Mehdi Karroubi, attempted to reach out to the Blues prior to their incarceration. The most recent Green manifesto, for example, released in this February and signed by both Mousavi and Karroubi, seeks to broaden the base of the movement beyond the middle and educated classes by appealing to workers and farmers, as well as ethnic and religious minorities. Apart from calling for free, fair, and competitive elections as well as the establishment of an accountable government that protects civil, minority, and women’s rights, the manifesto calls for the necessity of promoting social and economic justice.

If this approach is even marginally successful, cracks may well develop in the government’s security structure. The Basij security forces, which became well-known for their prominent role in the suppression of the 2009 protests, are the “enforcers” of the current regime — and the Basij are made up primarily of lower-class youth. As their families’ economic conditions worsen, however, Basij loyalty to the government may no longer be taken for granted. If working-class families join the Green opposition in the streets, the Basij would be confronted by their friends and family members in the very crowds they are charged to control. Perhaps this might impel them to have second thoughts about firing on the demonstrators.

As its leaders understand, the Green Movement’s future hinges crucially on its ability to make common cause with the Blues. The continued deterioration of the economy creates that opportunity; only time will tell whether it will come to more than that.

AUTHOR
Dariush Zahedi is a lecturer in the political science department at the University of California, Berkeley. Hamed Aleaziz is a freelance journalist.