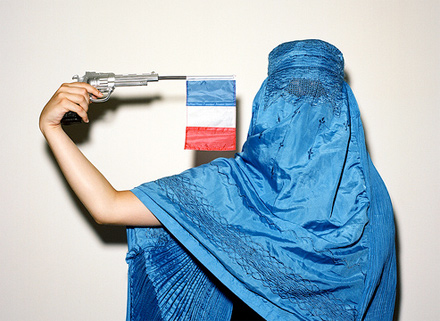 France has now officially outlawed the Islamic niqab or burqa in public. French President Sarkozy said in 2009, “The issue of the burqa is not a religious issue, it is a question of freedom and of women’s dignity … The burqa is not a religious sign; it is a sign of the subjugation, of the submission of women. I want to say solemnly that it will not be welcome on our territory.”

This statement by Sarkozy isn’t going to save any Muslim woman’s self-respect or free her from her oppressor by forcing her indoors and out of public life. If a woman is being forced to wear the burqa or niqab by a dictatorial husband or father, the French have just made it more difficult for her to break free from her oppressor. However, most Muslim women choose to wear the niqab of their own free will, and with this ban France has just pushed another segment of their Muslim population further from the mainstream. France outlawed the hijab, or the simple headscarf in public schools and institutions in 2004, and it has forced girls who want an education to either compromise their religious values, or compromise their academic and professional future. Where’s the liberté in that?

A small minority of Muslim women in certain parts of the world wear what is known as the abaya (black cloak) and the niqab (face veil). It is known as a burqa in South and Central Asia and seen most often as the blue full-body veil worn by Afghan women. This form of covering is the manifestation of the strictest interpretation of modesty in Islam. Women who choose this practice consider themselves seriously observant Muslims and believe this form of dress allows them to move about the outside world while protecting their dignity.

People get nervous around these women. I have often heard the refrain, “You need to see a person’s face to judge their character.” I disagree based on my own experience with Muslim women who wear the niqab. I have always known them as highly disciplined, and solid in their faith convictions despite society’s derision. They believe in keeping their physical attributes out of the public conversation by covering. While I don’t subscribe to this strict interpretation of Islamic modesty, I respect the woman who does.

Case in point: I had been corresponding with a young woman in regard to a part-time position on the behalf of one of my clients. The job would include conducting various marketing events within her local Muslim community. Because she lives in another city, I had no chance to meet her until this weekend when I traveled there. Because I am familiar with this city’s Muslim community, I was not surprised to meet her wearing a black abaya and black headscarf. She and I had coffee in a café, and as the interview progressed she proved to be everything her emails and our previous phone conversations led me to believe about her without the benefit of a face-to-face meeting. She is an extremely enthusiastic and professional young woman filled with exciting ideas for marketing my client’s product. Toward the end of the conversation she mentioned that she usually wore the niqab face veil but she decided that she would not don it for our meeting in case I would be uncomfortable. I told her I wouldn’t have been bothered by it in the least. I felt sorry she had come out without her veil on my account — but to be fair, she didn’t know me. While she knew that I’m also a Muslim, she couldn’t be sure I wouldn’t discriminate against her on behalf of my client. After I assured her that her faith practices are her own business, and that my client has great respect for Muslims, she visibly relaxed and we continued our conversation.

Her character, personality and professionalism were evident long before I saw her clothing, or her face. In her American city she happily moves about her neighborhood dressed the way the French have now outlawed. She told me the Muslims are an integral part of her city’s greater community, and she is very comfortable wherever she goes in her graceful, black garments. I will recommend that my client hire this young woman; I’m completely confident that she is going to far exceed the expectations we had for this position.

As I’ve written before, if you strip a woman of what she feels is her dignity, you’ll have a lot of indignant women. We all know American women can become pretty indignant if someone tells us what not to wear.