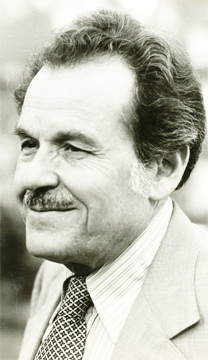 I wanted to write about my father Nosratollah Amini on the second anniversary of his death (April 20th) and how profound an effect his death has had on me. I said to myself, maybe I should just stay silent and let someone else who knew him speak this time. Dr. Yarshater was kind enough to do so. These two men were friends until each went his separate way. Yet those kinds of friendships, built on mutual respect, always remain alive. When I called Dr. Yarshater to attend a memorial we organized while my father was still alive, he accepted my invitation without hesitation, and took a train from NYC to Washington to be present. My father was so elated to see him.

I am compiling a “yadnameh” about my father, in hopes of keeping his memory alive. He left his mark on me and to this day, I see his impact in my interaction with people. Sometimes during Ayd, I would ask him for a new poem and he would recite one for me, without having to think about it. I don’t have the privilege to do that anymore but I have concluded that the best way to honor him is to go back to Persian poetry. Among the many books I have in my possession is a Divan-e- Khajeh Hafiz Shirazi, published in Tehran, in 1320/1941 in an old leather cover. I will cherish it and remember him every time I turn the pages.

The late Mr. Nosratollah Amini was one of the distinguished personalities of Dr. Mosaddeq era. He served from 1951-1953 as the Mayor of Tehran, appointed by Dr. Mosaddeq as one of the people he trusted their integrity and capability.

I became acquainted with Mr. Amini through a common friend, Dr. Mahmoud Sana’i, Professor of psychology at the University of Tehran. Sana’i was from Arak, the same city that Amini came from, and they were close friends. He introduced me to Amini and I became fascinated by his personality. He had a keen sense of humor, but what initially attracted me most was the amount of poetry that he could recite from memory and the effective way he recited them. Acquaintance led to friendship and to a deep admiration of his many qualities.

His speech had a slight and pleasant trace of Araki accent. Even though our meetings were mostly spent in enjoyment of Persian poetry, there was also a serious side to Amini’s life and thinking. He loved Iran profoundly and cared about its fate. His patriotism and his dislike of communism attracted him to Dr. Mosaddeq. His devotion to Dr. Mosaddeq’s way of thinking soon made Amini a confident and helper of his. When Dr. Mosaddeq fell, Amini remained a staunch supporter of him and showed a fidelity that continued to the end of his life.

In 1961 I left Iran to reside in New York. For a number of years I did not have adequate news of him. I heard that he had been appointed at the beginning of the Revolution the Governor of Fars, but he had resigned after a month. In 1979 he left Iran and took residence in the US in Virginia. Many years later when I eventually saw him in a gathering, life had taken its toll and he was on a wheelchair, but his liveliness and presence of mind had not suffered. It was a pleasure to see him with his pleasant smile, brightening his face.

I visited him in his residence and we talked about good old days. I was glad to see that Mrs. Amini and his kindly daughter, Fariba, were taking good care of him. But nature does not make any exceptions. A day came when I heard the sad news of his passing. I attended his memorial as did many of his old friends. I am glad that his children keep his memory alive.