The Persian Mohican is Gone 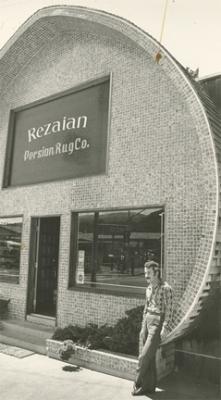 Climbing up Powell St. in downtown San Francisco and turning left onto Sutter, a big shop used to capture your attention with a the wise Jedi master Yoda on its display window, glaring at you as if inviting you in. This was Taghi Rezaian’s last carpet store; departed Taghi Rezaian.

In contrast to the simple exterior of the shop, inside was an elegant combination of furor and flurry. Hundreds of colourful rugs with different designs and patterns, fine and coarse textures, large and small had been piled on top of each other. And if you stepped into the backroom, confused you would feel as though you had entered into an intricate tale from One Thousand and One Nights, wondering what this far off – not only geographically but historically as well– Island was doing there.

Taghi, who would spot the look of surprise on your face, would tell you the story behind some of these carpets with his sweet and mellow English accent that is the trademark of Iranians and if you became a little more intimate with him, he might have even brought out a bottle of wine from the stockpile – although he never drank himself – and throw an oriental feast for you on the rugs.

Taghi Rezaian who was born in the chaotic year when the Second World War started born into a family who were caretakers of the holy Shiite shrine in Mashhad, Iran. He came to the West Coast to study when he was 20. He fell in love with an American girl, married her and made the U.S. his home. Simultaneously he started a successful carpet business. Taghi was one of the first carpet dealers in the West Coast.

We no longer dare set foot inside Mr. Rezaian’s store. From the moment his heart stopped beating on that rainy spring day of April 3, all our memories of the ancient tales became haunted. Reality is starting to sink in: it was not the carpets that enchanted; it was Taghi who charmed you with his words, glances, manner and hearty laughter.

His death signals the loss of one of the last survivors of a gone generation – yes! the generation we have been calling elders for some time now –in which one could see traces of unique and nostalgic authenticity in. He was one of the last Persian Mohicans. A combination of traditional strength, which showed itself in his full moustache and a compassionate heart which peaked out from under his moustache every time he laughed.

Above all, he came from a generation where one could not easily categorize or describe him within man-made and artificial identity demarcations.

Despite his commitment to Iranians, Taghi always thought of himself as an American. He would say “I’m Iranian by birth and American by choice, and I’m proud of both.” He never believed that there was anything contradictory about that, although citizens and authorities of both Iran and the US often tried to paint him as the “other.”

But the “other” was also a ” godfather” as many people used to call Taghi. He supported many Iranians in their quests to start lives in the U.S.; sponsored green card applicants, gave jobs to those who were desperate, and co-signed mortgages for literally hundreds of Americans and Iranians.

While the 444 days of Hostage Crisis interpolated the Iranian community with shame, some even denying their origins, Taghi offered a rug valued at $1000 to each of the hostages when they were released in 1981. Of the 52 over 40 accepted.

We always wanted to find the opportunity to sit and listen to his words of wisdom ad detailed memories; memories of the historical past of the two nations and their mergers.

But we always postpone our desires for the sake of tomorrow.

As a Persian poet says, “soon, it gets too late!” and this is exactly our story with Taghi Rezaian.

And may ‘the rest’ rest in peace.