These wars must end! 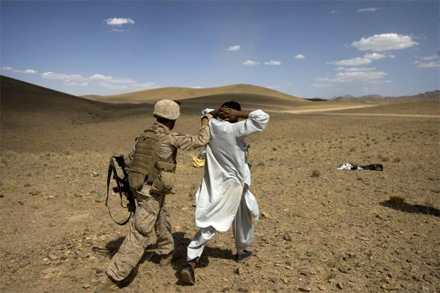 Today it is an undeniable fact that the overwhelming majority of the peoples of Afghanistan and South Asia, through their protests and militant struggles, have urgently demanded that the U.S. along with its “coalition of the willing”, after ten years of occupation, killings and devastation, withdraw its forces from their homeland immediately.

Every passing day of US-EU military occupation of that country inflames the rage of hatred in the hearts of Afghan and Pakistan patriotic forces against the empire’s foreign policy makers and strengthens their resolve to fight back and neutralize the invading armies of the western hemisphere.

It is also equally certain that the prolongation of the wars of aggression in three if not four theatres of war – Iraq, Afghanistan, Pakistan and Libya – by Washington, London and Paris would also increase the number of fatalities of the invading armies.

Although the Obama Administration, the U.S. Defense (or in fact War) Department and the intelligence-corporate media each one in its own design try to bury the U.S. military casualties under mountains of obscenely-entertaining advertisements, hyped up crime-ridden news reports and the ample coverage of the selfish and superficial games performed by the heads of the two parties on essential social programs, the truth of the tragic fate of many young Americans, with working class origins, springs out.

2010 ranked as the highest year for NATO-Pentagon fatalities in Afghanistan since the war began ten years ago!  No less than 711 NATO servicemen died in this year.  But not every war casualty falls in the active theatre of the war.  Some become victims after they return to the US of A.

Consider the sad case of the 28 year-old ex-Marine corporal Hunter who had earned a purple heart after taking a sniper’s bullet in his left wrist but still was returned to combat in Afghanistan.  In the wake of his return to the U.S., he lobbied for Veterans on the steps of the U.S. Congress, road-biked with injured veterans and in the aftermath of earthquakes in Chile and Haiti, he joined the humanitarian efforts in those countries.  Then, three weeks ago, on March 31, Corporal Hunt bolted himself in his Houston apartment and using his own gun, committed suicide.  He became another casualty of the wars that are waged to fatten the bank accounts of the war industries, which this past year of economic difficulties for millions of workers around the world saw record profit margins!

In another encounter, an Afghan freedom fighter who had joined the Afghan’s national army just a month earlier and wearing his new military uniform entered the military base near the city of Jalalabad, in eastern Afghanistan at 7:30 AM and detonated a bomb that killed five NATO officers and four Afghan soldiers.  This incident which took place on April 16 represented the biggest recent killing of NATO troops from a single attack.

On the same day, April 16, five International Security Assistance Force service members lost their lives following an armed attack by a team of Afghan resistance forces in the eastern region of the country.  A day before, on April 15, the police chief of Afghanistan’s southern Kandahar Province, Khan Mohammad Mojahid, lost his life following an attack on his headquarters. During the same military engagement two other police officers were wounded.

Attacks and fatalities similar to those mentioned above are too many to name in this short article.  But it is important to see that the balance of forces in the U.S. war in Afghanistan is turning consistently against the U.S. occupation forces and this reality has been admitted by the top U.S. military commanders that the wars on the borders of China and the former Soviet Republic are not winnable.

The fact is that the U.S. armed forces and the “coalition of the willing” by occupying a foreign country and raising the level of their exposure have made the forces a natural and easy target for the resistance forces who know the topography of their country like the back of their hands. Also it is public knowledge, at least in the rest of the world that the European members of NATO already have decided to withdraw their armed forces from Afghanistan for good.  The world, except Washington, is cognizant of the fact that no amount of indiscriminate shelling and killing of civilians would bring the people of Afghanistan to their knees.

In that country the losses of U.S. personnel stands at 1533, UK 363, other members of the alliance including Canada is 512 and the sum total reaches 2408.

Summing up the waste of lives engineered by Washington in the two countries adds up to 7,177.  Knowing that the ratio of wounded to dead is generally 10 to 1, the number of western troops wounded in both wars reaches about 70,000 human beings lives destroyed.

Let’s not forget that the U.S. foreign policy in the mid-east and south-Asia has undoubtedly inflicted a tremendous human cost on the people in the occupied lands.

These wars must end!

AUTHOR
Ardeshir Ommani is an Iranian-born writer, political economist and president of the American Iranian Friendship Committee (AIFC) www.iranaifc.com in the USA. He can be reached at: Ardeshiromm@optonline.net

PrevPreviousچخه
NextLunch Break: The latest enemies of Iran – dogs and their ownersNext