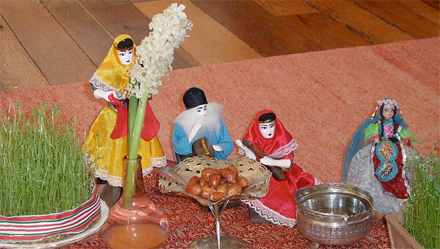 Everyone on my dad’s side of the family speaks Persian. At family reunions they all jabber like exotic birds, their hands spinning and twirling for emphasis. Every so often I catch a word that I know, or my name, and I try hard to make out what’s going on, but I never can.  So I just sit there, pretending I’m having fun, and waiting for someone to translate for me.

Besides my mom, I am the only one who doesn’t understand. You would think having someone like me would make me feel better, but it doesn’t. It makes me upset, and embarrassed. As ashamed as I am to admit this, I want my mom to be one of these ladies, sipping drinks, wearing fancy designers, and talking loudly in fluent Persian. I don’t want her to have to ask what’s going on, and what the joke is. I want her in on it.

When my grandma visits from Iran, she has to switch to English around me so I will understand. English is not her first language, and it makes communication harder. Whereas she can talk to my cousins easily, she struggles when talking to me. When I’m with all of them, they all talk while I stand awkwardly to the side, pretending I know what is being said.

When I was little, my dad made some lame attempts at teaching me Persian, which consisted of him having me repeat words. At 4 years old I wasn’t too interested in repeating words that had no meaning to me. When I try to talk to my dad about not teaching me, he gets defensive, I don’t get very far. He shuts down and tells me I didn’t want to learn.

My dad doesn’t identify with his heritage much. He moved to America when he was 16. His parents sent him away to protect him from the beginnings of the Iranian Revolution. He finished high school and went to college in North Carolina, and didn’t go back to Iran until he was 36, so for some reason he doesn’t connect with being Iranian. He doesn’t want to celebrate the holidays, and wouldn’t if we didn’t make him. He barely even visits his family, and when he does go it’s not for very long.

In November 2008, my family went to Iran for two weeks to bring back my grandma. It was my third time going, and the one I remember the clearest. We stopped in Paris and then boarded the plane to Tehran, the capital city of Iran. My grandma’s sister lives there, along with my dad’s cousins. We stayed at her little apartment, and visited some traditional Iranian places, like palaces and old style teahouses.  The thing I remember most was that she had some sappy romance novels that I would secretly read in the bathroom, or when my parents were out of the house.

Next, it was off to Shiraz where we stayed in my dad’s old house. It’s a big house, with a garden and a greenhouse out front, and flowers everywhere. The inside of the house is traditional; stiff and over packed with furniture, and I love it. I love to walk around in there, going through old treasures and exploring the little nooks and crannies. In the sitting room area there are little bowls, always filled with Iranian sweets that I love to go and sneak.

One of my favorite parts of going to Iran is unpacking the suitcases. I’m not talking about my suitcase. I’m talking about the ones my aunt sends to my grandparents. Their whole basement is filled with boxes and suitcases from her that have never been unpacked. However, sometimes we are allowed to open one. It’s great because you never know what you’re going to find. I have seen everything from sunglasses to XXXL sweatshirts, broken DVR players, and maps. Just opening one of those suitcases is hours of fun and adventure.

Besides that, there isn’t much to do in Iran. There are some palaces and gardens you can visit, or some bazaars, big outdoor malls with stands to go shop in. Since we had gone to a lot of those last time we went to Iran, we spent a lot of time in the house. My days mainly consisted of breakfast, reading, (my grandma had a lot of romance novels as well) lunch, schoolwork, dinner… Everyday.

The best part about my last trip to Iran happened near the end. We were visiting my dad’s friend and his daughter, who also live in the States, but were in Iran because of some health issues in their family. They told us that their 20 year old daughter, named Laila, was taking horseback riding lessons. We decided to check it out.

We went, and I instantly fell in love. I loved spending an hour each day riding, not thinking about anything but mastering the movements. The only problem was the instructor didn’t speak English. He would try to talk to me, but I, not knowing Persian, couldn’t understand him, so he would have to bring over a translator to tell me what to do. This was time consuming, and embarrassing. Since it was such a hassle, I was mainly left alone and told to follow the other kids leads.

I resent my dad for not teaching me Persian, and for not being more connected to his roots. I want to learn Persian, whether my dad helps, or not. And I will. And then, I will finally be able to talk to my grandparents on the phone, visit Iran and understand my instructor, and answer whatever questions my relatives see fit to throw my way.