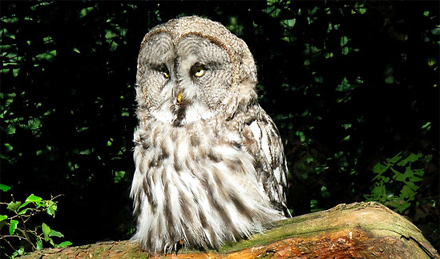 The old Owl was sitting at the edge of the world and watching life—the passage of life and its trail, that is. He saw men who became attached to the worldly things such as bricks, doors and walls. The Owl knew, however, that bricks fall apart and doors break and pillars don’t last long.

He had seen so many broken crowns in the midst of ruins of this world and always sang songs to remind men that this world is temporary; He sang loud so men can hear but they didn’t care.

One day, a bird was passing by and heard the Owl sing. The bird said, “It’s best if you stop singing because men don’t like your voice; you make them sad and they don’t like you much. They think you are a pessimist and have nothing but bad news for them.”

The Old Owl was heart-broken so he never sang again.

A sad silence took place over the sky. Then God told the Owl, “Why don’t you sing anymore? My sky is sad and misses your voice.”

“Dear Lord! Your men don’t like me nor my songs,” the Owl replied.

“Please sing because your songs speak of truth and truth is sometimes bitter.”God said.

So then the old Owl sang for God as he continued to sit at the edge of the world. And those who hear him and understand him know that he has a message from God for all.

It was the day of dividing the Universe.

“Demand anything from me, your share of this vast creation, and I will give that to you. I am abundant and generous,” God said.

Everyone came and asked for something. Someone asked for wings to fly, another for legs to run fast. Yet another asked for a strong big body, and someone else asked for sharp eyes to see. Another chose the ocean in which to live, and another the sky.

Suddenly, a tiny worm came by and told God:

“I don’t want much from this Universe—neither sharp eyes, nor a big body; not wings, nor legs, neither the sky nor the ocean. I only want some of your Being— just give me part of yourself and I will be happy.”

And God gave him a bit of his own light. Then he was called the Glowworm.

God said, “Whoever carries my light with him is of royalty, even if it is a tiny bit. You are now the sun who hides under a small leaf at times.”

Then God said to all other beings, “If only you knew that this tiny worm asked me the best thing because one should only demand Godness from God.”

Years and years have passed and the Gloworm is still shining at the Universe when there are no stars in the sky. His tiny light is shining and no one knows that this is the same light that once God gave to a small worm.

From Where Have You Left Your Wings by Erfan Nazarahari. Translated by Leyla Khamoushian.