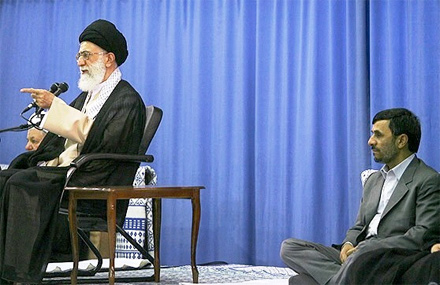 April 17, 2011, the Iranian media reported on a presidential decree enacted by President Mahmoud Ahmadinejad in which he accepted the “resignation” of Intelligence Minister Hojjat al-Eslam Heydar Moslehi, who, according to Ahmadinejad, would “serve the regime and the Islamic revolution in other capacities.” In a separate decree, Ahmadinejad appointed Moslehi “presidential adviser in intelligence affairs,” a move clearly aimed to emasculate the influential minister. Less than an hour after Ahmadinejad’s decree appeared in the media, however, Fars News Agency reported that Supreme Leader Ali Khamenei had “opposed” the “resignation.”

While Ahmadinejad has yet to comment on Khamenei’s veto, his media director Ali-Akbar Javanfekr initially claimed that the Supreme Leader’s decree was fabricated. Although Khamenei remained publicly silent on the matter, Hojjat al-Eslam Morteza Aqa-Tehrani, Ahmadinejad’s clerical affairs spokesman, conceded that “the Leader of the Revolution is Fasl al-Khetab [has the final say].”

The failed attempt to dismiss Moslehi is part of Ahmadinejad’s wider campaign to cleanse his government of senior officials imposed on him by other power circles within the Islamic Republic. Moslehi’s resignation would also make Ahmadinejad’s cabinet – along with Prime Minister Mehdi Bazargan’s short-lived transitional government in 1979 – the only cabinet in the history of the Islamic Republic devoid of representatives from the clergy.

Ahmadinejad has previously attempted to restrain the Supreme Leader’s control over the intelligence ministry. On July 26, 2009, Ahmadinejad dismissed then Intelligence Minister Mohseni Ezhehi, accusing him of “incompetence” in dealing with the popular unrest that engulfed Iran after the June 12, 2009, presidential election. Some reports suggested that Ahmadinejad dismissed Ezhehi because his ministry had prepared a report to the Supreme Leader arguing that the protest movement was not a foreign plot or a velvet revolution. Ahmadinejad, with a team of intelligence analysts from the Islamic Revolutionary Guards Corps (IRGC), reportedly went to the Intelligence Ministry and declared that the political activists arrested by the IRGC had already confessed their activities as foreign agents. In addition to the minister, Ahmadinejad also replaced a number of senior intelligence ministry officials with IRGC officers.

There is no love lost between the IRGC and the Intelligence Ministry, and IRGC officials publicly express contempt for the ministry which they perceive as a rival in the fight against the “counter-revolutionaries.” On April 15, Hojjat al-Eslam Ali Saidi, the Supreme Leader’s representative to the IRGC, boasted, “At some occasions, the Guards has been much ahead of other institutions and could be more relied on. The Guards had a more clear [sic] position in political issues.”

Ahmadinejad’s attempts to take over the intelligence ministry are hardly surprising to Khamenei. “Although the government appoints the directors of the Intelligence Ministry, intelligence and actions of this ministry are related to the affairs of the entire country,” Khamenei noted on March 5. “Therefore, it [the intelligence ministry] should not lean towards movements, [political] parties and political individuals, but should always move in the direction of guardianship [the Supreme Leader] and the Islamic revolution,” he warned.

The conflict between Ahmadinejad and Khamenei, coupled with the weakening of the intelligence ministry, is not without beneficiaries: the IRGC is likely to exploit any ambiguity and to fill the vacuum. Moslehi may end up wishing he had indeed been fired.

First published in The American.

AUTHOR
Ali Alfoneh’s is Resident Fellow at American Enterprise Institute for Public Policy Research. His research areas include civil-military relations in Iran with a special focus on the role of the Islamic Revolutionary Guards Corps in the Islamic Republic.