Iran is Not Winning 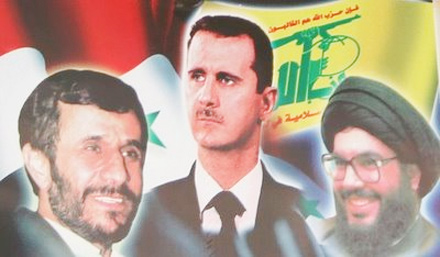 The current Middle East mayhem is far from over. The situation is fluid in many countries, but one important interim conclusion is coming to the open, and it is positive: The Islamic Republic is not emerging victorious as the sectarian Sunni-Shiite schism seems to have a growing impact.

This is bad news to the Ayatollahs in Tehran. Judging by their propaganda and that of their Hezbollah proxies in Lebanon and the Syrian regime, all can be easily explained with the usual charge: that the American-Zionist plot is in full force. Simple? Not any more, as we can learn from the events in Syria and Lebanon.

Let’s start with the latter. For almost three months Hezbollah has been trying, in vain, to establish a new government, to replace that of the pro-Saudi and pro-American Sunni Sa’ad Hariri. By political tradition, Lebanon’s PM is always a Sunni Muslim, and so is the Hezbollah choice to the job, billionaire Najib Mikati. The problem is that money does not seem to work this time, as Mikati lacks popular Sunni support which is still given to Hariri. The Sunnis make no bones that the new proposed government is likely to be a Shiite-dominated, pro-Iranian stooge and they express their disenchantment in unmistakable sectarian terms.

Mikati himself tries to show his independence, but he fools no one. When Hariri, who is still the acting PM started to sharpen his anti-Iranian rhetoric, Mikati made some disparaging comments, which were greeted with derision. To be sure, Lebanon’s politics are a mosaic of many conflicting loyalties, so pinning Mikati’s failure only on his closeness to Hezbollah and its Iranian mentors may be somewhat of a stretch.

But then comes the Syrian factor, and the picture starts to make much more sense. A Lebanese government usually needs to get the blessing of the big brother in Damascus. Rafiq Hariri, Sa’ad’s father and predecessor as PM, tried to evade what became obvious, and paid in his life in February of 2005, in what was a joint Syrian-Hezbollah operation.

For awhile, Sa’ad Hariri managed to form a status-quo of convenience with his father’s killers, who a few months ago felt strong enough to topple him. They seem to have miscalculated, as Bashar Assad has found out much to his, as well as Hezbollah’s and Iran’s chagrin.

Syria is burning, and the situation shows no signs of calming down. According to Syrian sources, 200 were already killed, and there are much higher estimates as well. The riots spread all over the Sunni areas of Syria, both the Arab and Kurdish. There are ongoing Sunni-Alawi collisions in the mixed Latakiyya region. The fear factor seems to have dramatically lessened, and the sectarian nature of the uprising in Syria is all too obvious.

No other than the loyal spokesperson of Bashar Assad, Buthaina Shaaban admitted as much. In one of her ever-confused statements, she referred to the situation in Syria as fitna. For those familiar with early Islamic history, as well as modern Arab political discourse, the term fitna is highly-charged and indicates a sectarian conflict. For a change, Shaaban stated the truth this time, and the reverberations are strongly being felt in neighboring Lebanon.

The pro-Syrian and Iranian coalition in Lebanon is not likely to change its hatred of the west, but Sa’ad Hariri and his allies are greatly encouraged by the unfolding situation. What seemed a distant mirage just a few months ago, a collapse of the Assad dynasty seems much more realistic now with the continuing uprising. Under these circumstances, there is no need for Lebanese politicians to hasten anything. Wait-and-see is the name of the game. President Suleiman, taken until now to be Hezbollah’s and Syria’s ally, is remarkably passive these day — and he is not the only one. This passivity is greatly encouraged by the successful Saudi show of force in Sunni Bahrain and the much tougher American tone against Bashar Assad.

So, with all that happening, the Lebanese Sunnis are not done, the Shiites are not victorious and the Syrian regime is fighting for its very existence.

Iran is not winning yet, perhaps not at all.