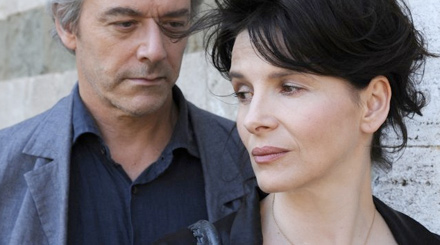 Ten interesting movies by really good directors don’t add up to one boring movie by Abbas Kiarostami. His film, Certified Copy, has given the world a new Mona Lisa’s Enigmatic Smile. Wondering whether the two film characters are really married or not, pivoting the work on a self-invented puzzle, quickly leads to yawns. Traditionally, Mona Lisa aficionados have in the same bland way burdened the great painting with an unimaginatively parroted enigma: what is she smiling about or who is she smiling at? The painting does not live off the reason for the smile, and Certified Copy does not live off the question of whether the man and woman are married. But ask the question, “Does it make a difference?” and suddenly the viewers mind is compelled to fall into lockstep with the film.

James Miller (played by William Shimell) is an art scholar who believes that the original and copy of a work of art have, or can be given, the same value. He has written a book around the idea and is in Tuscany for a book tour. There he meets a woman (played by Juliette Binoche) who runs an antique shop dealing in well-crafted copies. She offers to take Miller sightseeing around the nearby villages. While visiting cafes, restaurants, town squares and wedding chapels Miller is confronted with a real life application of his abstract idea regarding original vs. imitated: the two begin to act as a married couple.

There is no scene in which they agree to pretend, so we are free to assume a surreal transformation of the original plot in which the two were not married to one where they are married. Or we can fill in a scene where we actually watch the two art philosophers agree to craft a copy of a marriage so realistically that the heart is fooled, perhaps proving Miller’s point. Or we can delight in Kiarostami’s ambiguity and just leave the question alone, continuing to explore the alternating sensations as we switch from a view where the couple is really married (let’s call it the original) to a view where they are pretending (the copy). Meanwhile the film draws us to ask, when does reality matter, and when is it just an empty obsession where an illusion will do just as well?

To me, the film seemed to argue against Miller’s idea; how I felt about the characters changed radically as I switched from one plot to the alternative. When the couple is married, the woman—who remains nameless throughout the movie–comes across as a tragic character who believes she wants nothing from a husband except to have one, the only condition being that he stick around. Miller becomes an insensitive husband not only in his callousness and irresponsibility but also in not being able to see why he left his wife. The reasons are exposed as the woman’s character unfolds.

When I imagine that the man and the woman are playing a game, the woman comes across as an even more tragic character. She never got that nominally existent husband in her life, and now would settle for even a temporary illusion of one. In this scenario, Miller comes across as a compassionate man willing to accommodate her, perhaps also indulging his attraction to the woman and taking up her challenge of proving his own point to himself. William Schimell does a competent job with this superposed characterization, while Juliette Binoche stuns with the masterful way she matches her character(s) ambiguity by ambiguity. She won the Cannes Best Actress award for her brilliant performance.

Leaving the film here as a philosophical study of copy vs. original would be underestimating Kiarostami’s human touch. The various parallel interpretations each come with a full set of motives arising from love, anger, need, disillusionment, and the many other bittersweet lures of life. The film even stands strongly on its own as a thoughtful and poetic romance, albeit post-modern in its disregard for linearity. But taken in a didactic context Kiarostami did leave me wondering whether it is not safer for a person just to be a self-certified copy. That way we can award ourselves all the value of the original minus the headaches. Works for some of us!