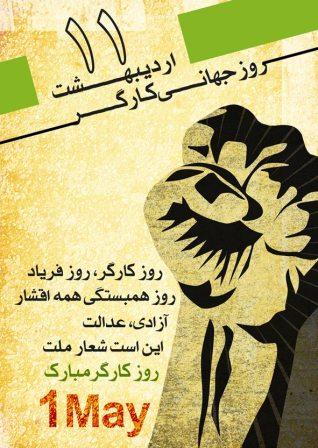 Today is May 1, the International Labor Day. This day is traditionally observed in Iran as “rooz-e kaargar.” Over the past several years, however, it has been almost impossible for workers to observe this day through holding any protests. In fact, each year, shortly prior to May 1, labor activists are rounded up and arrested, in order to make sure there is no leadership for any protests. Many labor activists and union leaders are in prison this year. Mansour Osanloo is only one of them, but quite possibly the most distinguished one. Osanloo has already served 4.5 years of the five-year sentence he received on charges of “acting against national security,” and “propagating against the regime.” He suffers from very poor health and has been hospitalized several times during his detention. He has not been allowed even one day of furlough since his arrest, and has been brutally tortured and beaten many times.

Certainly, with the worsening conditions of the economy, factory closures and layoffs, unpaid wages by bankrupt employers, and a myriad of other problems ailing the Iranian economy and threatening the vulnerable workers of Iran, Iran has stepped into very frightening times. The Iranian workers may be a volcano which will eventually erupt, if not today, then tomorrow. The numerous sit-in’s and small strikes being reported certainly attest to the brewing trouble ahead. Against this backdrop, there have been several calls for gatherings and protests for today. As I write these lines, there are reports about Tehran’s having assumed the appearance of a military state, again, with plainclothes forces present at city squares, way ahead of the 5:00 p.m. time set for the gatherings. I don’t know whether people will show up today or not. If they do and if you hear of any news out of Iran today, please share it here with others. Remember, in the absence of fair and true official reporting out of Iran, we are the media. Get the voices out if you can. Happy May Day.