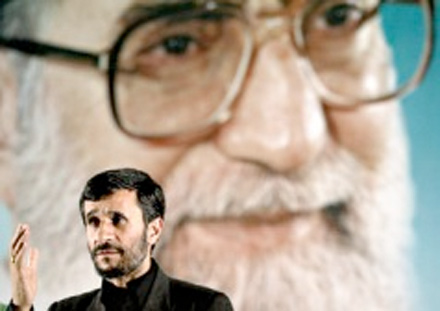 It is nearly impossible to determine the degree of stability within the opaque world of Iranian politics, but a number of incidents have come to light recently that reveal deepening fissures within the regime.

On display is an increasingly bitter fight, verging on an irrevocable break, between conservative supporters of the present system of clerical government, as epitomized by Supreme Leader Ali Khamenei, and the hardliners backing the non-clerical president, Mahmoud Ahmadinejad.

Khamenei publicly rebuked the president, his former protégé, but now increasingly his overt rival for power, over the firing of the intelligence minister, Heydar Moslehi. Khamenei then went a step further and ordered the minister’s reinstatement — a powerful move that exceeds even his considerable mandate as spelled out in Iran’s constitution.

True to his habit of dismissing cabinet ministers over the most minor disagreements, Ahmadinejad had fired Moslehi on April 17 because the minister was at odds with the president’s right-hand man, Esfandiar Rahim-Mashaei, who Ahmadinejad has been grooming to succeed him as president when he leaves office in 2013. Khamenei has made clear he is no fan of Mashaei. Speaking before visitors on April 23, he said: “I won’t allow, as long as I’m alive, the slightest deviation in the great movement of the people of Iran toward its ideals.” The term “deviant” is a code name for Mashaei.

For Khamenei, however, Ahmadinejad is becoming a political liability. In nearly every Iranian institution, including the parliament, figures once loyal to both the president and Khamenei have begun to question whether Khamenei, believed to have once been Ahmadinejad’s most powerful advocate, is still an effective leader. This has created instability in some government institutions.

This fight has now produced two major factions. The first group is composed of conservatives who first and foremost are loyal to Supreme Leader Khamenei. Many were once among President Ahmadinejad’s staunchest supporters. But it seems that their support for Ahmadinejad stemmed from the Leader’s approval of the Iranian president.

Now, the latest dispute has drawn many mainstream conservatives, including Ayatollah Ali-Akbar Hashemi-Rafsanjani, closer to the Supreme Leader. After all, Rafsanjani had long warned the Leader of Ahmadinejad’s potential hazards and his appetite for power. Just before the 2009 election that brought Ahmadinejad back to power in 2009, Rafsanjani wrote an to Khamenei alerting him to the danger posed by an Ahmadinejad victory and said to win the leader’s confidence: “You and I are the only ones left from the Revolution.”

The second group is comprised of those who are ideologically closer to Ahmadinejad and Mashaei, including the Islamic Revolutionary Guards Corps. There are powerful circles in the Islamic Revolutionary Guards Corps that have approved of and greatly benefited from the Ahmadinejad administration over the past six years. There are also a great number of presidential appointees who remain loyal to Ahmadinejad and Mashaei.

Mashaei and Ahmadinejad subscribe to what Mashaei calls “Iranian Islam,” which is based in part on the idea that the twelfth Imam in Shiite Islam (also called the Hidden Imam) will return to earth to save the world through an apocalyptic war and make Islam the dominant power. Those clerics who do believe the Hidden Imam will return to earth believe the result will be peace and harmony, not war. Lacking any formal training in Islamic jurisprudence, Mashaei has claimed to be a pioneer in “new Shiite teachings” and has angered many senior Shiite clerics in the country.

The public rift between Khamenei and Ahmadinejad has led many hardline Ahmadinejad supporters to reevaluate their enthusiasm for the president and has provided conservative critics of the president with new ammunition to attack Ahmadinejad and his cabinet. In fact, the critics used one of Iran’s greatest weapons reserved for the opponents of the regime whom they call “seditionists,” against the president: four websites with ties to Ahmadinejad were filtered and blocked. Ahmadinejad’s loyal supporters did not sit by quietly either. Dolatyar, a political site operated by supporters of President Ahmadinejad, threatened conservatives critical of the administration with “annihilation” and warned them not to find themselves in the same “path of annihilation as previous opposition groups.”

President Ahmadinejad fired his previous Minister of Intelligence, Gholam-Hossein Mohseni-Ejei, in the summer of 2009. The official excuse was that he was dissatisfied with the Ministry’s handling of the aftermath of the disputed June 2009 election. But the main reason behind Ejei’s ousting was his fierce disapproval of Mashaei becoming Iran’s new vice president. Even Khamenei, who spent a great deal of his political capital backing Ahmadinejad’s questionable election victory a month earlier, despised the idea, and he directed Ahmadinejad to remove Mashaei.

In his first disobedient act as president, Ahmadinejad ignored the Supreme Leader’s order. Instead, Mashaei resigned a few days later and was appointed by the president as his chief of staff. This time it seems Khamenei is taking direct action himself.

In early April, Mashaei resigned his post as the director of the Presidential Compound, one of his 18 official posts. Some anti-Ahmadinejad conservatives claimed that Mashaei was fired and that President Ahmadinejad was distancing himself from his best friend. But a day later, it became clear that Mashaei left his post voluntarily so that he could direct his attention toward the upcoming parliamentary elections this winter and the 2013 presidential run.

In an interview with Iranian media, Mashaei ruled out a possible run for a seat in the parliament this year. But he told reporters, “It is too early” to ask him about his presidential ambitions. He told them to come back “six months before the presidential election” in 2013 for an answer.

Still, it is uncertain whether the Guardian Council, an ultra-conservative body responsible for approving candidates, would even allow him to run. In fact, it seems that members of the Guardian Council, all of whom were appointed directly or indirectly by Supreme Leader Khamenei, are not thrilled to see Mashaei as a candidate. Chairman of the Guardian Council Ayatollah Ahmad Jannati recently said Mashaei “will never be approved to run as long as I am alive,” ruling out Mashaei’s chances for holding any elected office.

It is hard to guess what the future holds for Mashaei’s political career. While he has the unconditional love and support of President Ahmadinejad, he has made a number of powerful enemies. With the conservative clergy angry with Mashaei, the Guardian Council dead-set against his candidacy for any future posts, and the Leader dissatisfied with his actions, Mashaei may be out of luck.

AUTHORS
Geneive Abdo is the director of the Iran program at The Century Foundation and the National Security Network. Arash Aramesh is a research associate for the project.