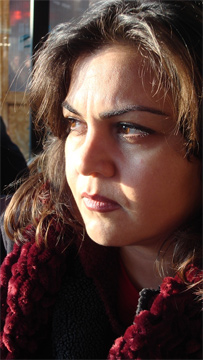 On a Wednesday at noon, three people are sitting at a round table in a restaurant.

The restaurant has red tablecloths and red velvet chairs. A woman and a man of almost the same age, and a teenage boy. The man is the owner of the restaurant.

The boy looks at the woman and says, ‘For fifteen years, he’s been saying he’s gonna take me to a resort in the North. He always takes those two. But when it comes to me, he says he has work to do. Now, he says his promise this time is different from other times.’

The boy drops his head and after a pause starts biting his nails.

Woman: ‘You have just become fifteen, naughty boy! You mean you were in your swaddling when your daddy promised you?’

‘Mum says it’s fifteen years. She says it’s since I was born.’

The man looks at the boy angrily and says, ‘Stop it! Why are you biting your nails all the time?’

Then he notices the fat buttocks of a young woman which wobble in her tight and short manteau with any steps that she takes. The man does not take his eyes off her, until the woman chooses her chair and sits.

Looking through the window, the woman feels chilled in the thought of the cold weather outside. She asks, ‘Is your mum doing well?’

The boy is wearing a pair of old-style jeans, an old pair of sports shoes, and a red shirt which is clearly not new. He takes his finger out of his mouth and looks at the man. The man is now staring at the projected breasts of the woman which hardly fit into her manteau. He turns to the woman and says, ‘My son is an athlete. He is into boxing.’

The woman puts a spoon of yogurt into her mouth. They are waiting for the main course to come.

‘That’s good! If you know swimming too, take Daddy to swimming with you. It’s good for his leg pain.’

The boy picks at the corner of his nail with his hand and says, ‘I told him. He doesn’t come.’

The father winks. To the woman or to the boy, it is not clear. Teasingly, he says: ‘Little man! You have a rich father to send you to swimming lessons. Who can I get money from to afford such a luxury?’

The woman asks, ‘What do you want to become later in life?’

Father: ‘I will set up a restaurant for this one too.’

The corner of the boy’s nail starts bleeding. He says, ‘I want to become a mechanic.’

Woman: ‘That’s good. But stop picking at your nail.’

With surprise, the boy asks, ‘Why?’

‘Why? Because you’ll cut yourself and then it starts bleeding.’

After lunch, the waiter cleans and wipes the table. The boy goes to the restroom.

The woman happily asks, ‘Do you want to take him to a resort in the North? You are doing the right thing, Bro. It’s not his fault to be caught between the two of you.’

‘His mamma calls every day and wants money. I give her four hundred Toumans a month. Yet, she says “It’s not enough!” She sends her child to me. He has come and says, “I want to see my family, my sister, and my brother.’

‘She sends her child to you? Isn’t he your child too? How can one live on four hundred Toumans nowadays?’

The man ignores his sister’s criticism and says, “His mamma says, ‘If you do not give more money, I’ll come and create a big scandal for you before your wife and children’” at which point the boy comes back and sits in front of them.

There is a bloodstain on the white tissue wrapped round his fingers.